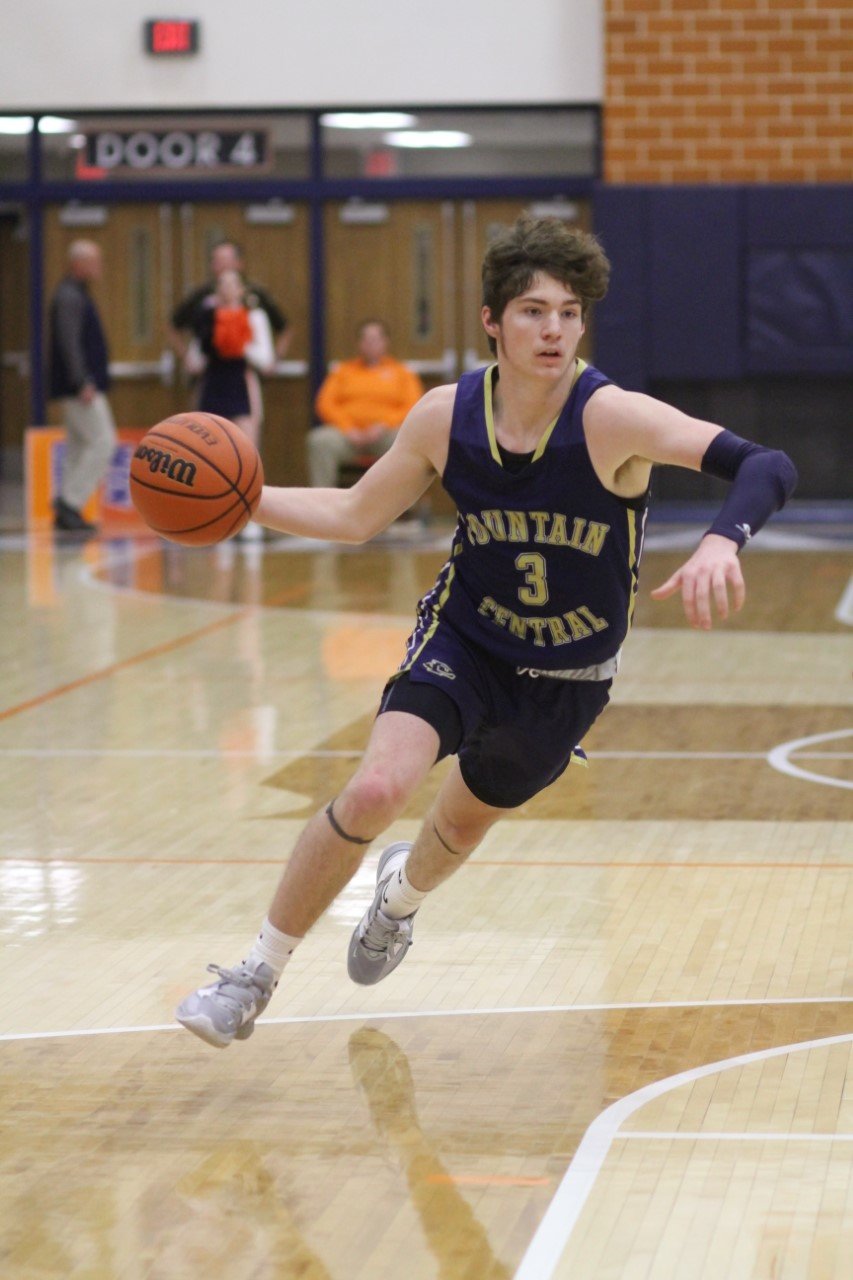 VEEDERSBURG — People are starting to take notice of what Fountain Central boys basketball is and what the Mustangs can be this season. Coming into Friday’s Wabash River Conference opener vs Riverton Parke, the Mustangs were ranked at No. 9 in the Class A poll. The 9th ranked Mustangs were able to continue their early season success as they dominated the Panthers from the opening tip in a 69-19 rout.

After the score read 2-2 in the opening minute, Fountain Central went on an 16-0 run and never looked back. They led 20-6 after one quarter, 43-15 entering halftime, and cruised into the final eight minutes of the game with a running clock leading 62-19.

FC has big goals and aspirations this season and Mustang coach Greg Dean couldn’t have been more happy of how his team got WRC play started with a win.

“At the beginning of the year we set some lofty expectations for ourselves and winning the WRC was one of them,” Dean said. “We knew that we had to get off on the right foot and we wanted to come out of the gate with lots of intensity and energy and we did that. I challenged them in the locker room about how much effort can we bring from the get go and they did just that.”

Through their first four games of the season Riverton Parke was averaging 45 points per game and FC’s defense put pressure on the Panthers all night forcing 19 turnovers. After surrendering just 19 on Friday the Mustang defense through it’s first three games are giving up just 32 points per game. It’s something that Dean and the Mustangs pride themselves on and on Friday they showed how difficult they can be for opposing offenses.

“I thought after the Clinton Central game we were too aggressive and too physical and committed too many fouls. We talked about how to get back to how we played in our first game against North Montgomery (giving up just 24 points). We didn’t give up position much and were still able to pressure the ball and cause turnovers. Our guys took our game plan and did a very good job executing it.”

Will Harmon led all scorers in the game for the Mustangs with 20 points in the win. Isaac Gayler added 15 points while Owen Acton came off the Mustang bench to score 11. Both Mason Larkin and Brayden Prickett scored eight with Koby Wolf adding five and Luke Foxworthy scoring two. FC for the game shot 24-44 (55%) from the field and 7-16 (44%) from three-point range.

The depth for the Mustangs has paid off in a big way so far in the early part of the season. FC has about eight or so players that see the rotation and Dean feels comfortable throwing anyone of them on to the floor at any given time.

“Guys like Owen Acton, Brayden Prickett have both given us great minutes off the bench on both sides of the ball,” Dean said. “Owen has played well in all three games so far while Brayden is effective on both ends of the floor. When you go that deep into your bench, it makes everyone feel more comfortable. Everyone right now is going a good job about understanding what their roles are and playing hard and unselfishly.”

While it’s still very early in the season and also coaches don’t like talking about rankings, Dean and FC are beginning to draw the attention of plenty of from outside the area. While the ranking doesn’t mean much right now, it’s a sign that if the Mustangs continue to play the way they have, they could really have a special season.

“I want our kids to understand that I’m proud and happy for what they’ve accomplished while also sticking to the grind of the season,” Dean said. “A ranking doesn’t help us accomplish any of our goals, it has to be done on the court. I want them to get as many accolades as possible, but we have go out and take care of our business every single day. If we keep winning games then those accolades will take care of themselves.”

Fountain Central stays un-beaten at 3-0 (1-0 WRC) on the season with the win. They’ll have the week off before their next WRC contest next Friday against Attica. It’ll be a girl/boy double-header with the Red Ramblers with the Lady Mustangs taking the court first at 6 pm.