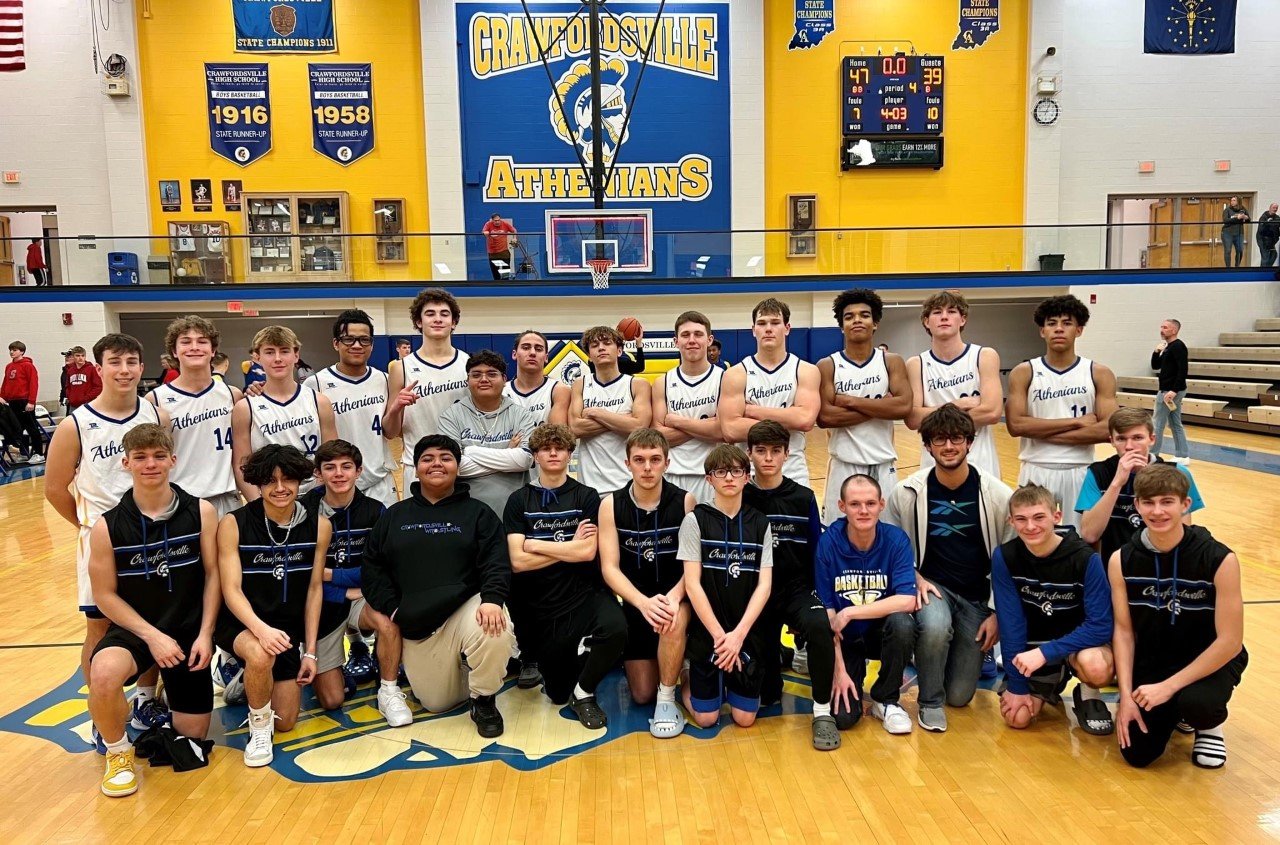 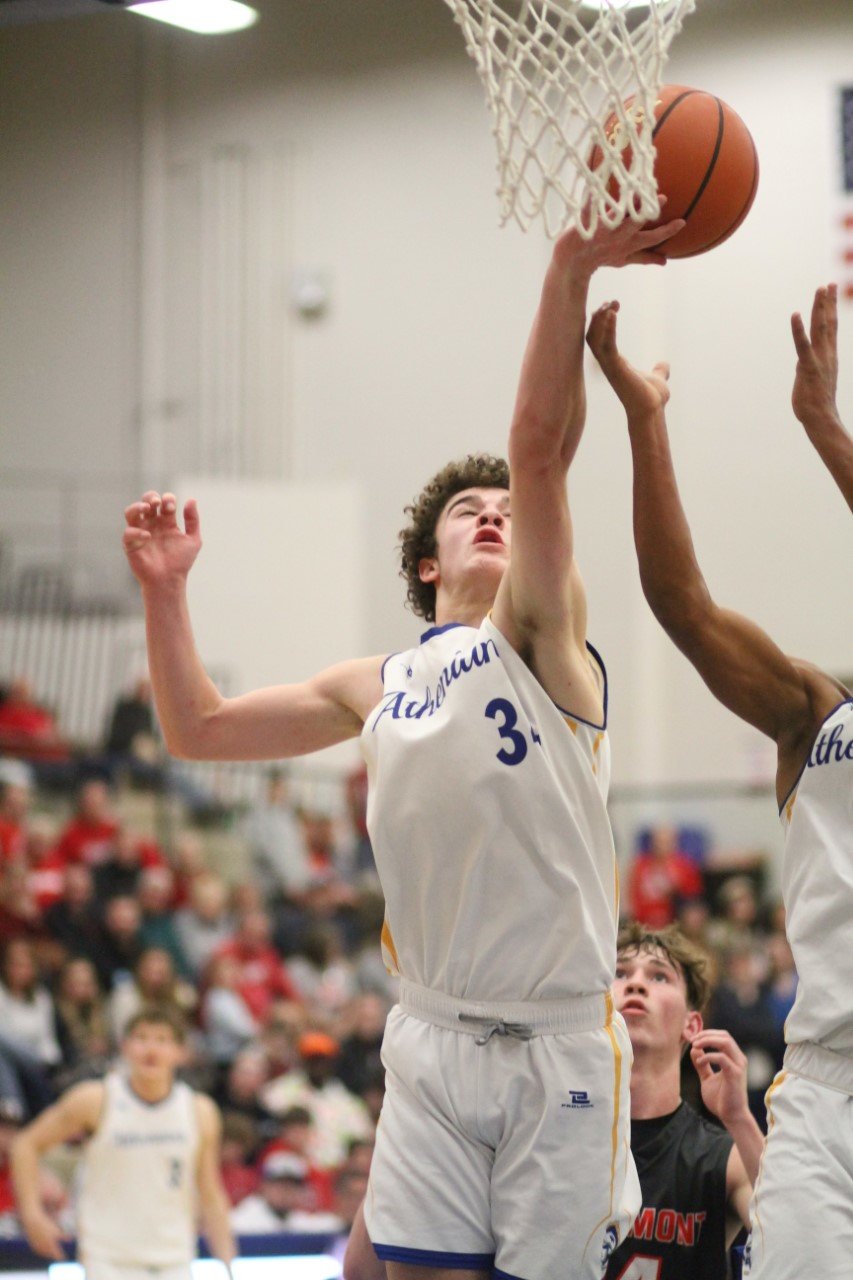 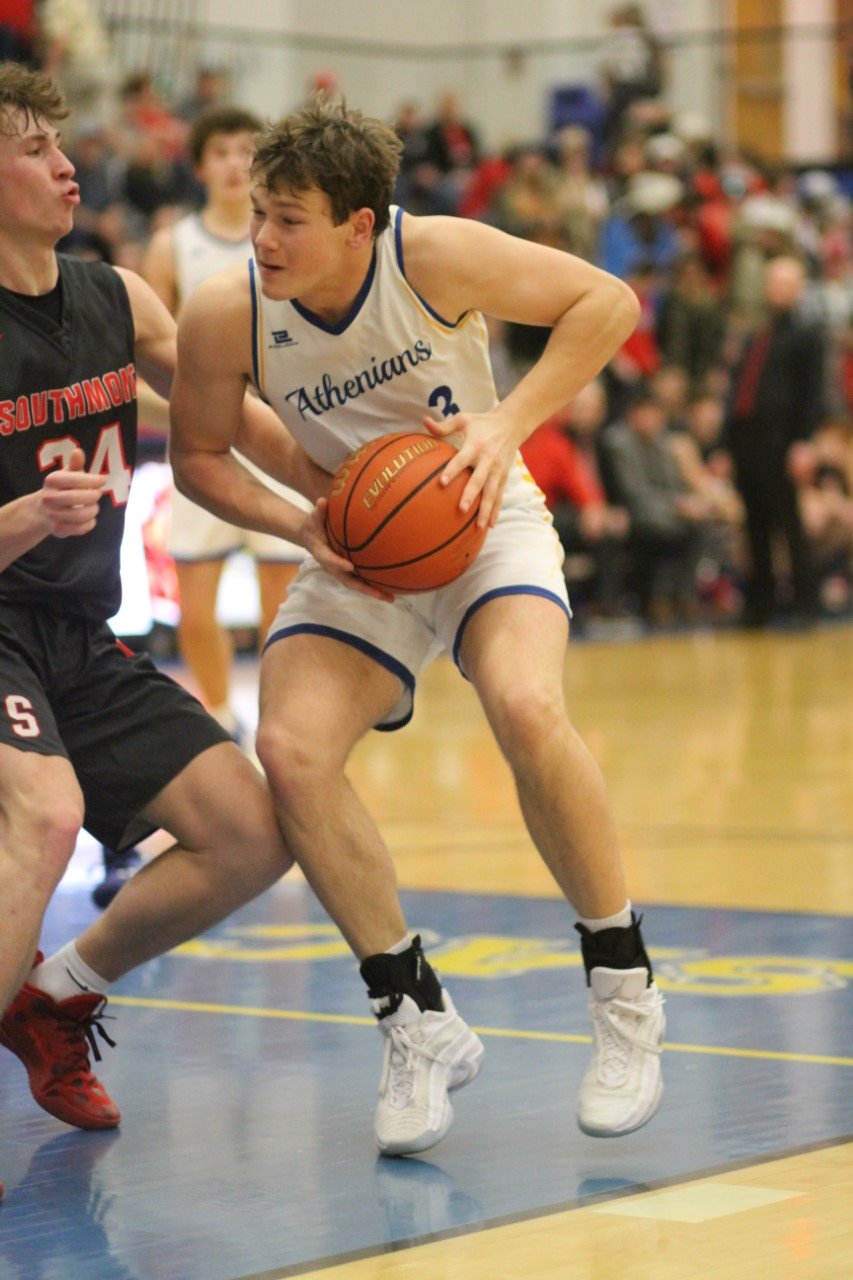 Cale Coursey is the leader of the Athenians. He scored 14 points as well to help lead his team to county title.
Lori Poteet/Journal Review 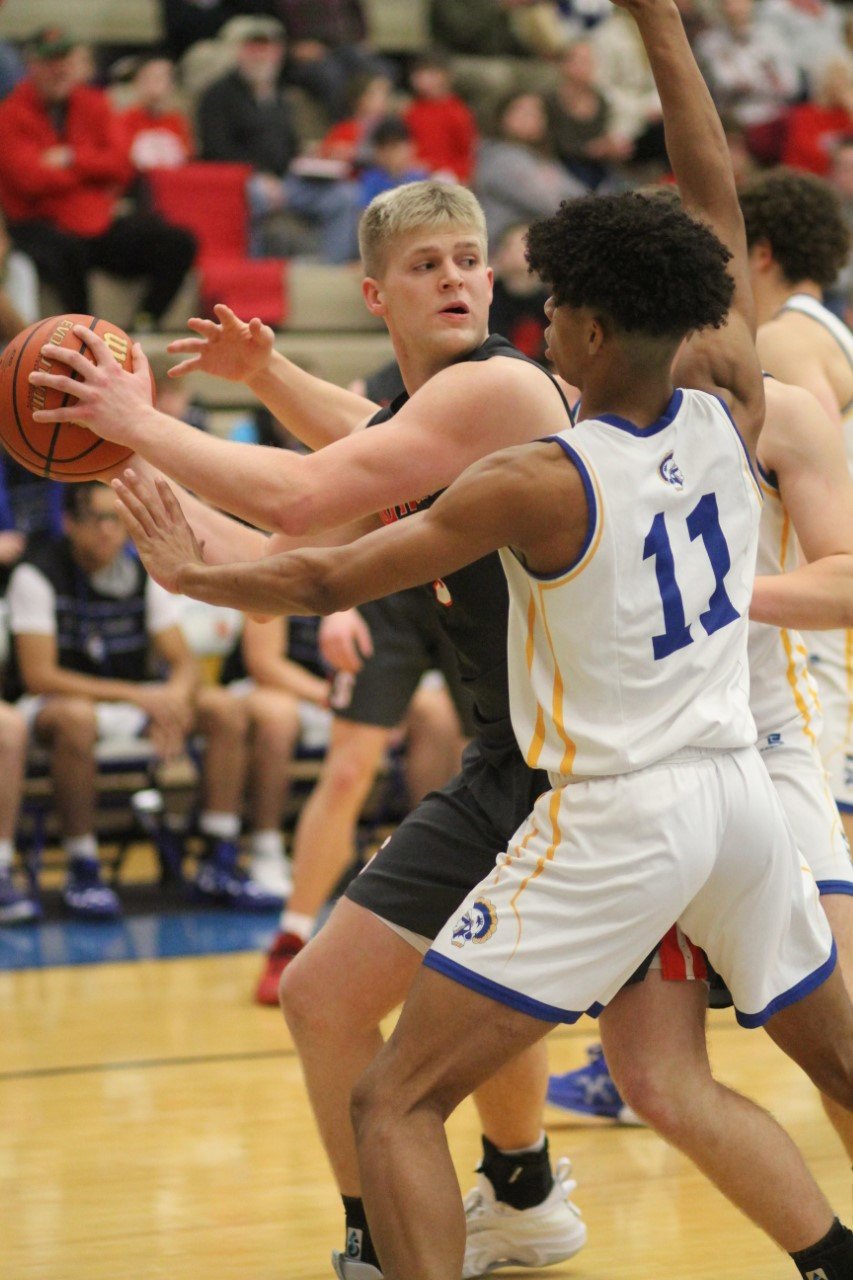 Carson Chadd was held to just 6 points as Crawfordsville's defense made sure they weren't going to let the talented big man beat them.
Lori Poteet/Journal Review 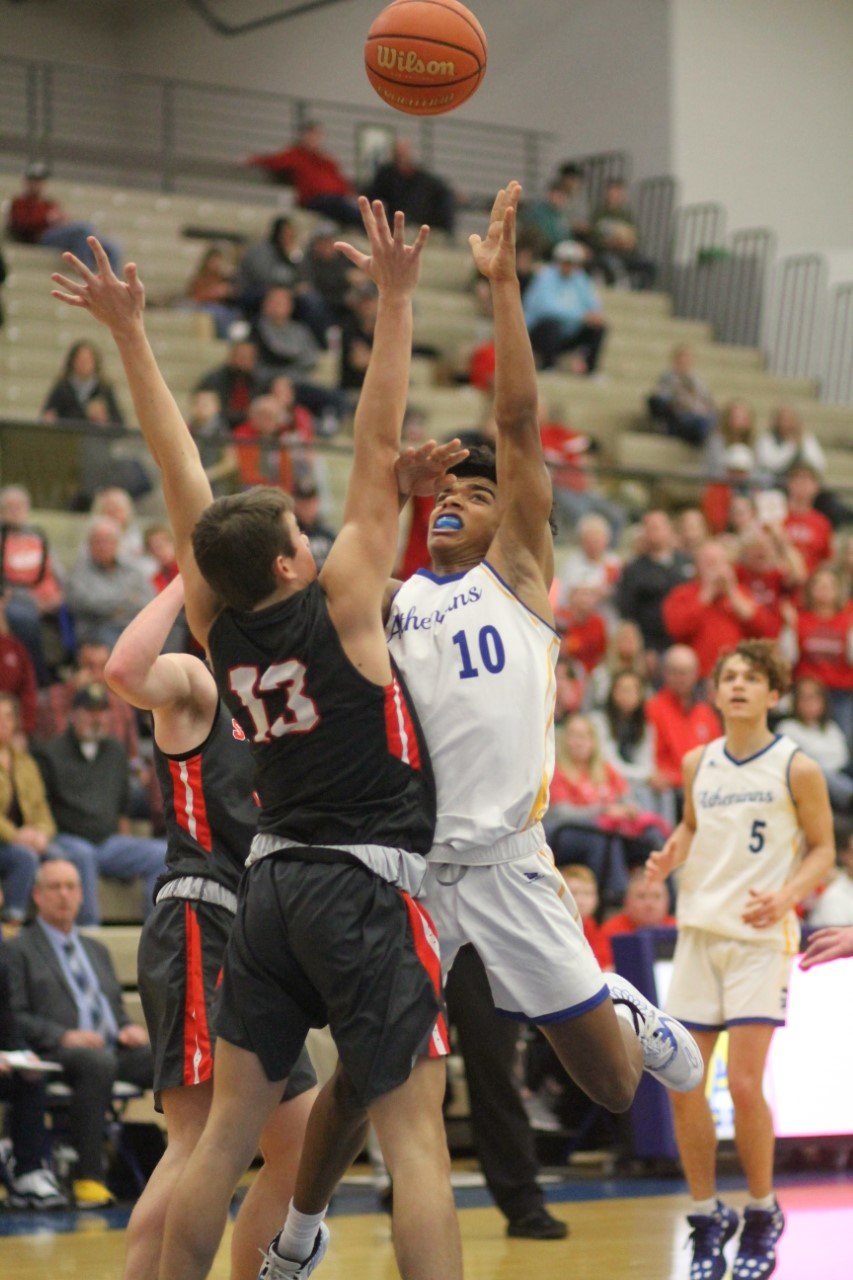 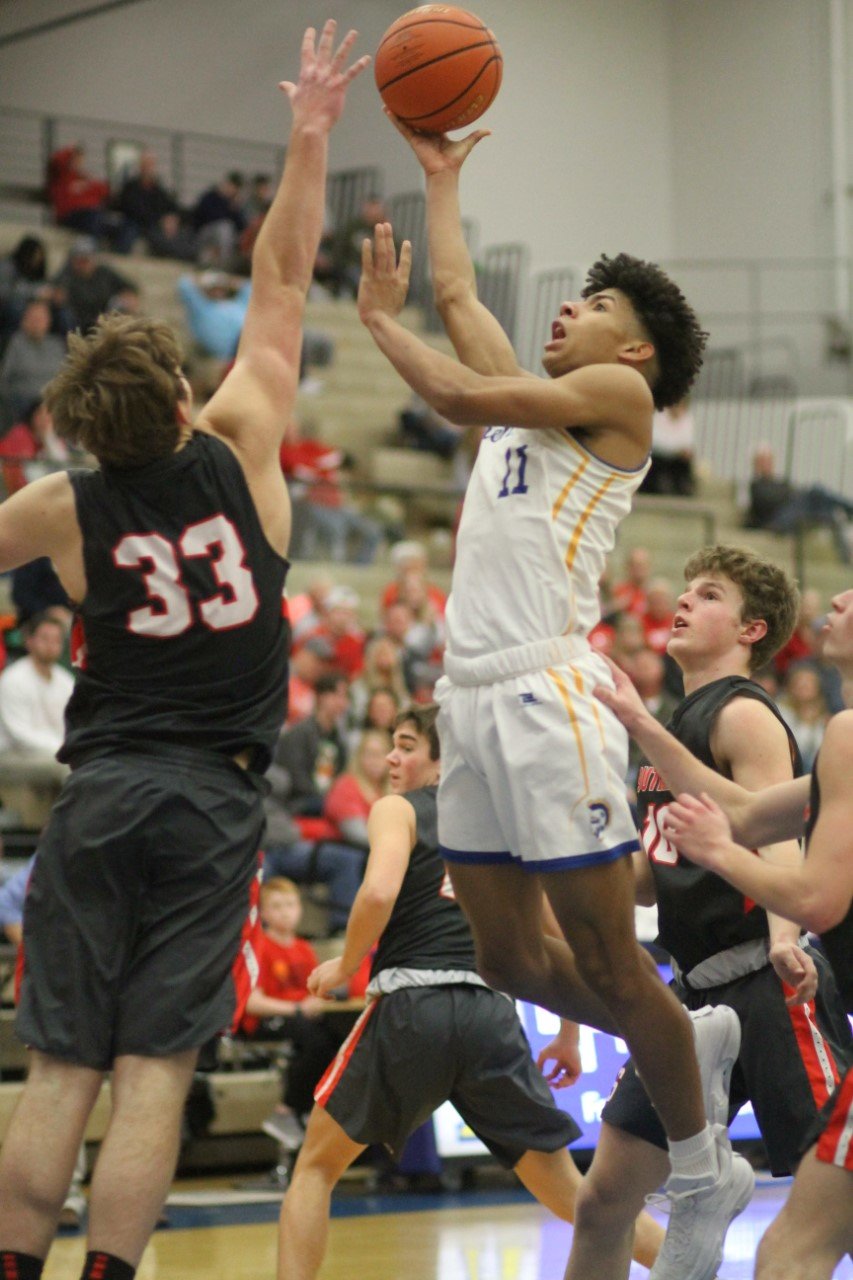 A season ago Crawfordsville boys basketball won the Sugar Creek Classic title, then was defeated by Southmont for the county championship. This season the roles were reversed. South took down CHS 32-30 for the Sugar Creek Classic championship and the two county rivals squared off again Saturday with bragging rights on the line. As it usually is between the Mounties and Athenians, it was a 26-25 lead for South going into the final eight minutes. Then Cville exploded for 22 fourth quarter points as they got revenge on their home court and bested Southmont 47-39 to be named county champions.

With 4:50 left in the game, Southmont big man Carson Chadd recorded his first field goal to make the score 33-32 CHS. After that moment, the Athenians went on a 7-0 run and the Mounties couldn’t find a way to come back as the Cville crazies stormed the court in celebration.

“It was another barn burner,” Crawfordsville coach David Pierce said. “We both knew what each team wanted to do and I thought each team did a great job of taking each other’s weapons away for the most part. It came down to the end again and we had a couple guys just step up. Cale Coursey and Drake Burris both played fantastic as did Alec Saidian with his hustle plays and also Ethan McLemore and his help on defense was phenomenal for us.”

What has plagued the Mounties for most of the season has been their in-ability to make free-throws. For the game South shot just 8-16 from the foul line. It’s something that coach Jake Turner has seen his team struggle with and it unfortunate caught up with the Mounties at a bad time.

“First off Crawfordsville deserved that win,” he said. “They played just a little bit harder than us and did a lot of little things that win basketball games. We just have to shoot our free-throws better. I was worried that it was going to come back and bite us at some point, and it did tonight.”

Crawfordsville has two players score a game-high 14 points as both Cale Coursey and Alec Saidian led the way. Drake Burris got out of his shooting slump by drilling three threes and scoring 12. Tyson Fuller had four and both Kaiden Underwood and Ethan McLemore scored two. CHS shot 17-33 (52%) for the game, 4-13 (31%) from three and 9-17 (53%) from the line.

“Our biggest growth was I think what we learned from watching film from the last time we played them,” Pierce said. “South played hard and you have to give Jake and Dan (Chadd) credit for how they prepare their guys. Down the stretch we hit some big time shots which is something we’ve struggled with this season. Hopefully this is a game that propels us moving forward.”

With the loss, Southmont falls to 10-4 (2-2 SAC) on the season. They will have the week to prepare for another tough SAC contest on Friday when they take on Lebanon on the road. The Tigers can clinch the out-right SAC crown with a win over the Mounties on Friday.

Crawfordsville improves to 6-7 (2-1 SAC) with the win. They will travel to Frankfort on Friday for a SAC tilt with the Hot Dogs.