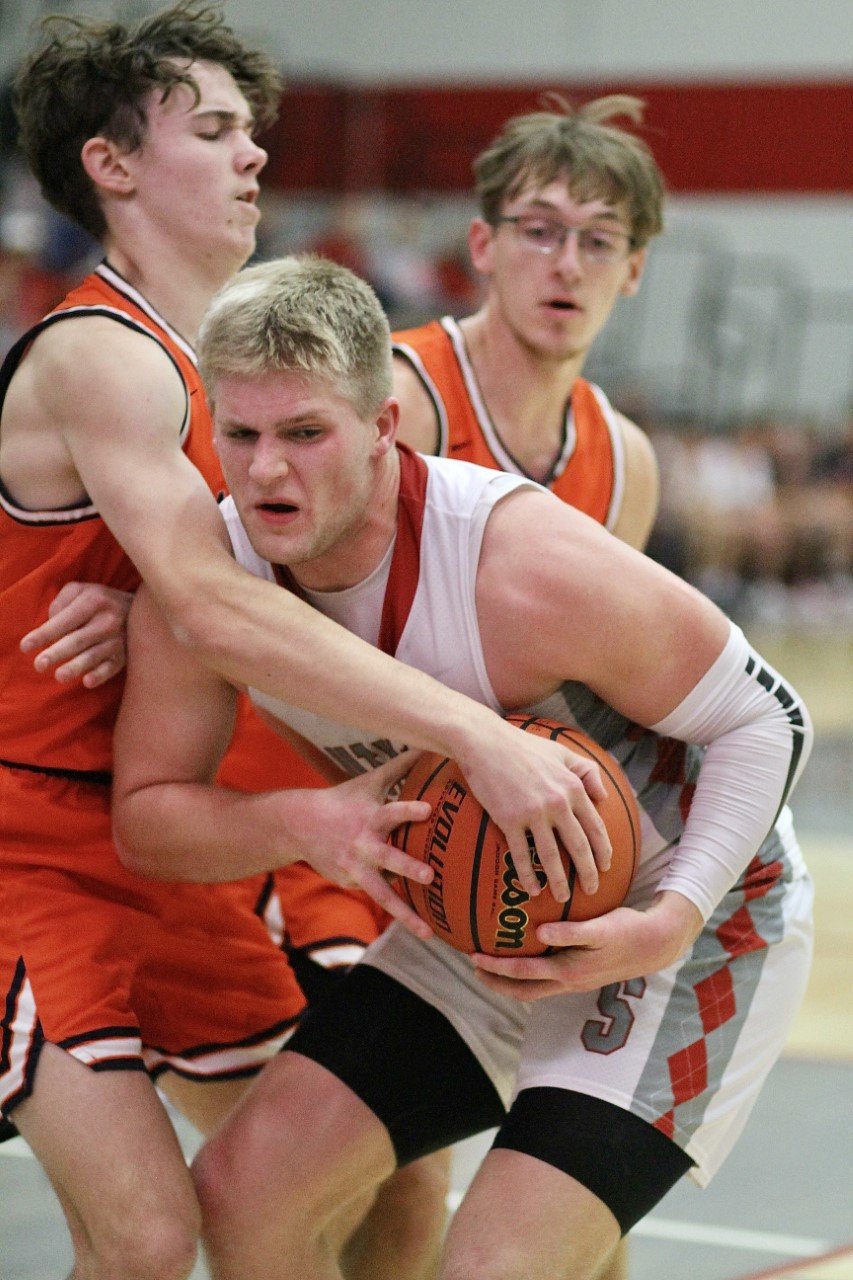 Carson Chadd was a man on a mission for Southmont in their 43-31 win over county rival North Montgomery. The senior led the Mounties with 16 points and grabbed 18 rebounds to lead his team to their second win of the season.
Lori Poteet/Journal Review 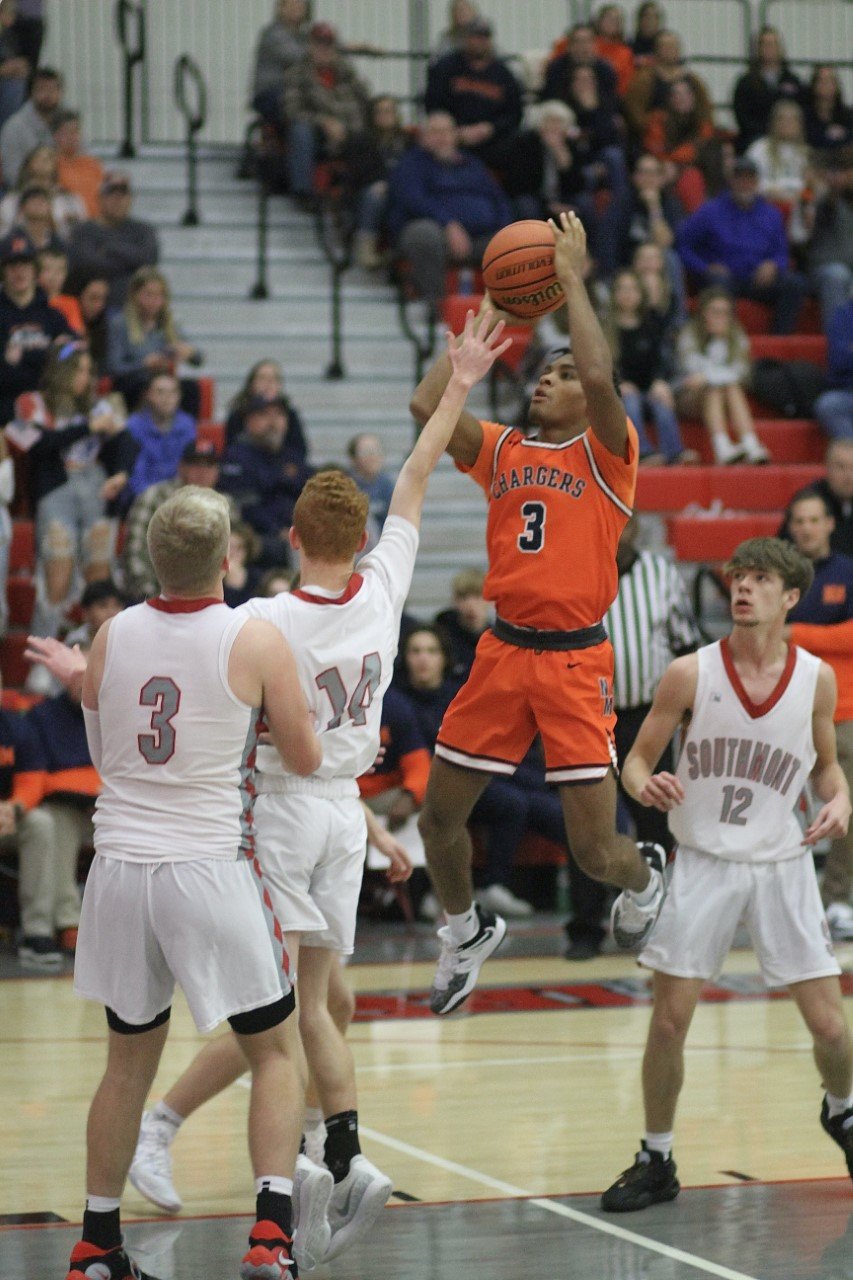 Mikale Willis provided the Chargers with another athletic guard in his season debut and scored six points.
Lori Poteet/Journal Review 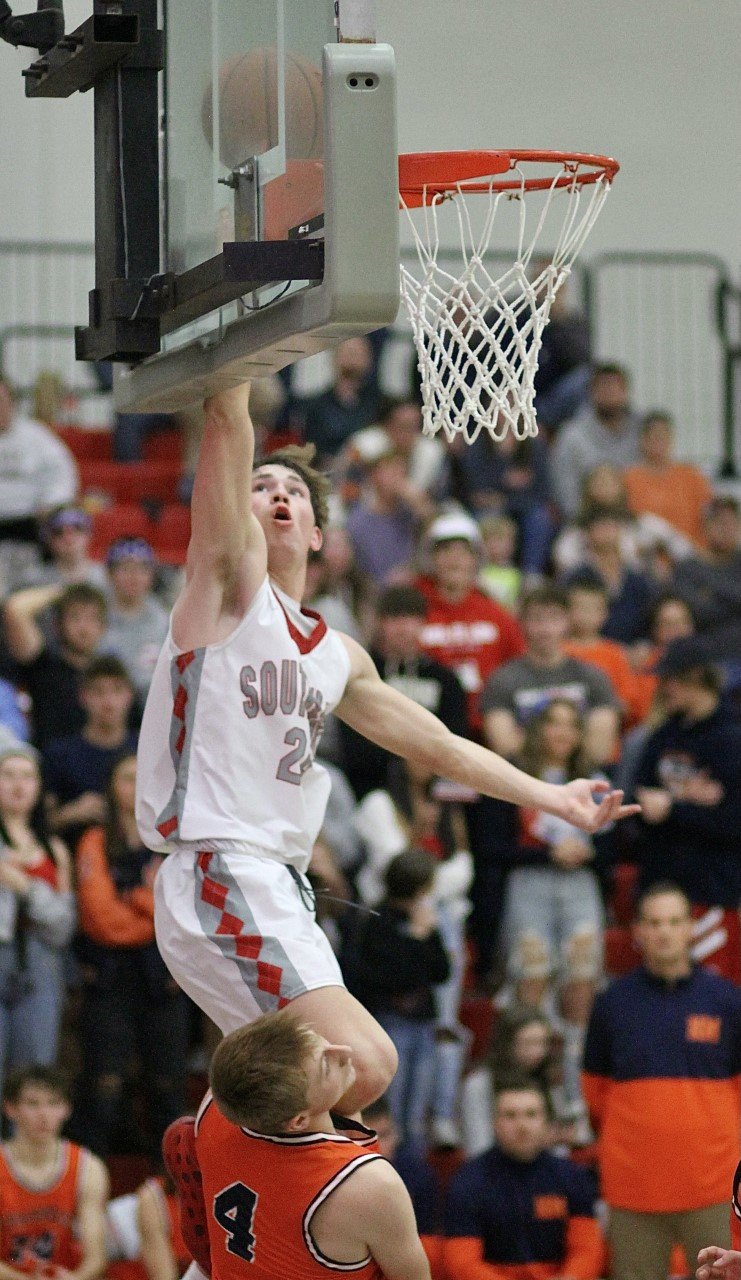 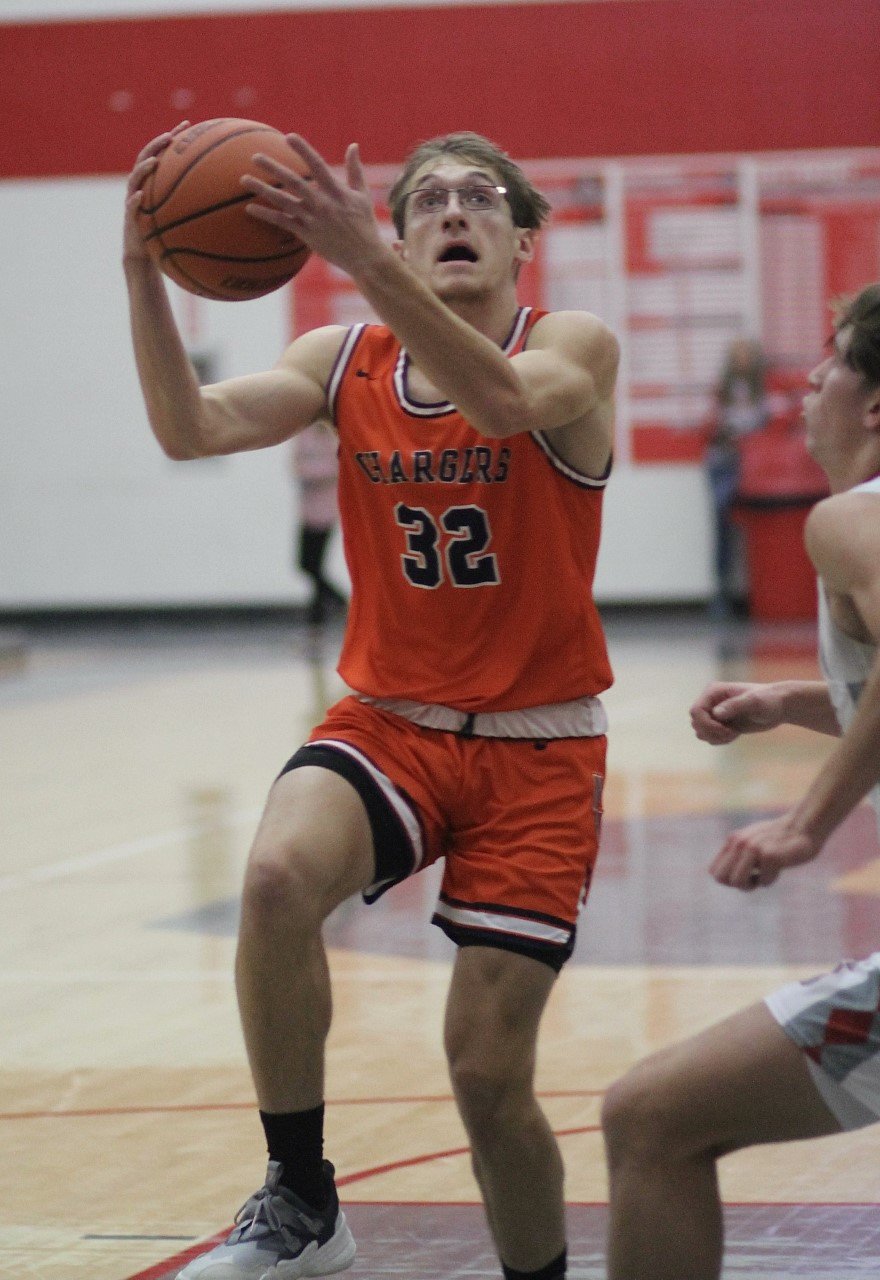 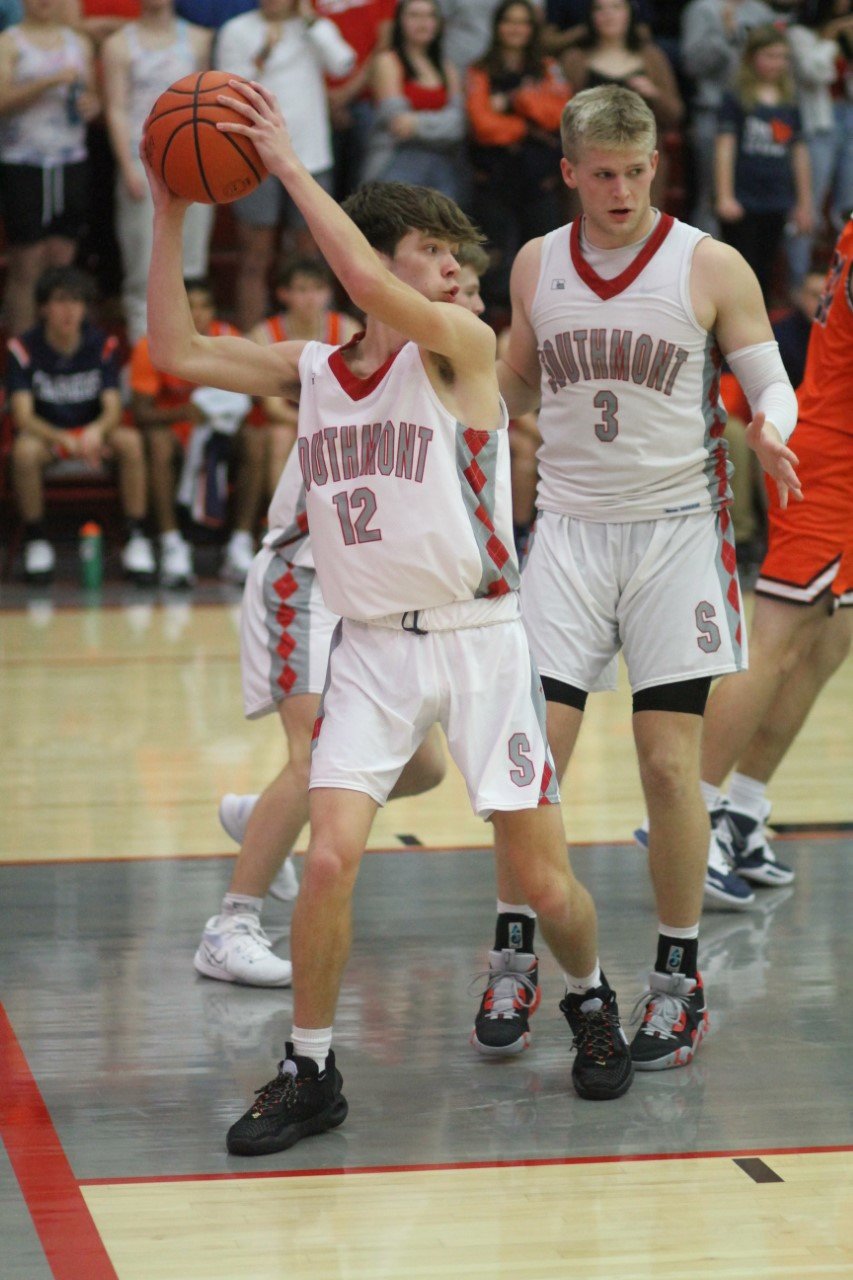 NEW MARKET — North Montgomery and Southmont boys basketball’s rosters may be different, but the rivalry still lives on as the Chargers made the quick trip to the southern part of Montgomery County to take on their county rival on Friday night. The two teams squared off in just the second game of the young season for the Chargers and the third for the Mounties. The first half wasn’t the prettiest of basketball, but thanks to a big-time 15 point second half from Carson Chadd, Southmont pulled away from the Chargers for a 43-31 county and Sagamore Conference win.

When both teams entered the locker room at halftime, the score read 15-13 in favor of North Montgomery. South came out of the locker room looking like a different team scoring the first 10 points of the quarter to take a 23-15 lead. North’s third quarter struggles continued as they didn’t get their first points of the quarter until the 1:49 mark on a Mikale Willis bucket. A big momentum swing came on the final play of the third as the Chargers trailed 26-20 and looked for the final shot. Instead an errand pass found the hands of Chadd who laid the ball in just as time expired to give his team a 28-20 lead after three.

Chadd for the game led all scorers with 16 points and was monster on the glass all game long as he ended with 18 total rebounds (10 offensive) to propel his team to the win.

“Carson does it all for us,” Southmont coach Jake Turner said of his senior. “He handles the ball, he’s arguably our best defender and to top it all off tonight he just simply rebounded like a mad man. I was able to have a good laugh when I told him that I was the best rebounder in the gym and he told me he was. I’ll conceded the title for this week. He wanted this win and made sure to do everything in his power to make sure we got it.”

In that first half South just shot 4-22 from the field and a pedestrian 3-14 from the foul line. They ended the game shooting 13-39 (33%) and 15-30 (50%) from the charity stripe. Along with Chadd’s 16 points Trip Ward scored eight, EJ Brewer six, Kyler McCandless four, and both Hayden Hess and Lucas Oppy scored three. Turner noted how the message to his team at halftime was very simple.

“I told them that we’re going to win the game,” he said “We were getting great shots and having great possessions, we were just missing shots that we normally make. Some of that was to their (North Montgomery ) defense and how physical they were playing us. We held them to 15 points and playing good defense too so I was happy with how we played despite us only scoring 13. We knew if we continued to patient we’d get the same exact looks.”

North Montgomery was led in scoring by 10 points for Kelby Harwood. Mikale Willis added six points for the Chargers, Ross Dyson five, both Jarrod Kirsch and Colton Zachary three, and Paul Leuking scored two. The Chargers battled foul trouble all night long as both Harwood and Leuking ended up fouling out of the game. Dyson had four fouls, as did Drew Norman. Charger coach Chad Arnold addressed the foul situation and the third quarter woes by his team after the game.

“We’ve struggled in the third quarter for quite awhile now and it’s just something we have to get better at,” Arnold said. “If you hold a team to 43 points, we needed to put up around 50. Our kids want to win and are practicing hard and I’m proud of them for that. Because we were in such foul trouble we had to play a lot of guys in some positions their not accustomed to playing. You do have to give South credit because they kept attacking. Chadd was obviously a tough matchup for us, but he is for anyone because he’s a load.”

A lot of the Mounties on Friday excluding their two seniors in Chadd and Brewer were seeing their first real taste of varsity conference and county basketball. Turner also, who is a North Montgomery graduate, gave the Mounties opponent their credit afterwards.

“I was proud of every single guy that stepped out on that floor because they all did something to contribute to our win,” Turner said. “I have a ton of respect for North and Coach Arnold and that program. Coach Arnold gets his guys to play tough, but we’re tough too. Hopefully this was a good first taste of county and Sagmore Conference basketball for our guys.”

The Chargers fall to 0-2 (0-1 SAC) with the loss and will have a quick turnaround as they’ll travel to Speedway for an afternoon contest against the Sparkplugs.

Southmont improves to 2-1 (1-0 SAC) and will be back at home tomorrow night as they take on potential sectional opponent in Cloverdale.