Doing it for Superman 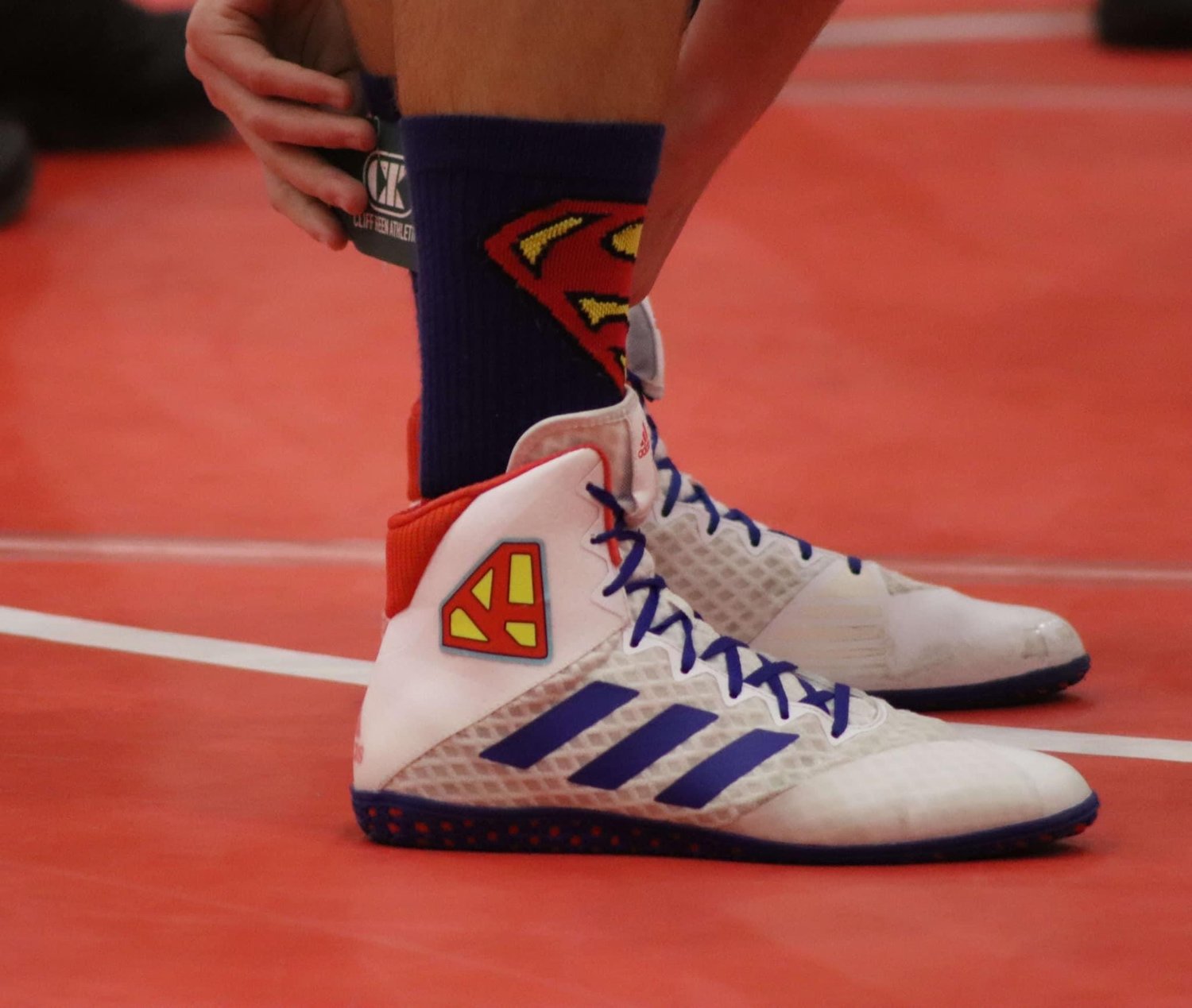 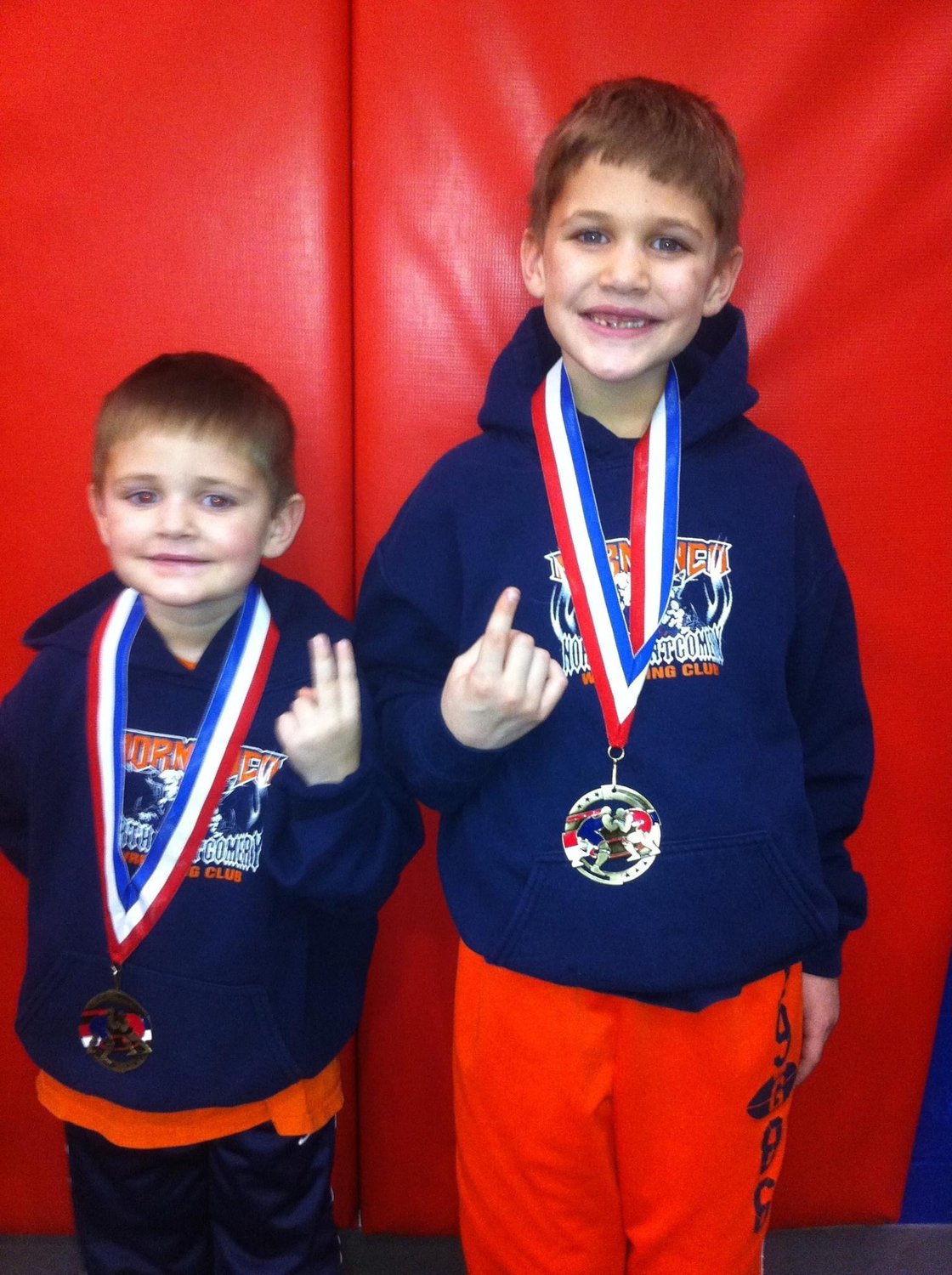 Kale (left) and Gage (right) Galloway shared a love as brothers and as wrestlers as they both began wrestling at a young age.
Photo Courtesy of Jessica Galloway
Codey Emerson | codey@jrpress.com

Not many high school athletes have had to bear what North Montgomery senior Gage Galloway has.

The three-sport athlete for the Chargers and his family endured something no one should ever have to. In July of 2010, Galloway’s younger brother, Kale, was diagnosed with cancer. Despite a seven-year battle with the disease, Kale died in June of 2017.

From then on Gage made sure to carry Kale’s memory with him. Anyone who has seen Gage wrestle this season, may have noticed him wearing Superman-themed socks and a K-themed Superman logo on his wrestling shoes.

“Ever since I started wrestling when I was five, he (Kale) was always there wrestling with me,” Gage said. “Even at three years old he wanted to be right there doing what I was doing. He’s the reason I wrestle because I want his memory to stay alive as long as possible.”

The idea for the Superman theme didn’t come by accident. Superman was Kale’s favorite superhero and it was a big part of his fight against cancer. Gage’s wrestling shoes and socks are just another way that he makes sure Kale is never forgotten.

“We always called him our little Superman,” Gage said. “That’s where we got the idea for the Kale Strong emblem that I wear on my wrestling shoes and I’ve really just let that push me and I live through Kale. I know he makes me better and stronger.”

Parents Doug and Jessica Galloway saw early on the bond the two boys had. While sometimes brothers take different paths in life and want to do things their own way, that wasn’t the case with Gage and Kale. They were inseparable.

“Gage was just such a great mentor for Kale,” Jessica said. “He was always so supportive of Kale in everything that he did and that goes beyond athletics. They both obviously had a real strong love for wrestling. It was no surprise to me at all that Gage wanted to do the things he has, like using the Kale logo on his shoes, wearing his Superman socks. Every single match of his career, he’s wrestled for Kale.”

Along with being a standout wrestler for the Chargers, Gage played football in the fall and will play baseball this spring.

After losing his younger brother, Gage could have easily stepped away from sports to focus on school and finishing his education. However, he stared this new challenge in the face and has used it to build him into the young man he’s continuing to become.

“I think it’s built a tremendous amount of mental toughness within him,” Doug said. “That’s something that Kale had as well. The general public never saw anything but a smile on Kale’s face. Gage was Kale’s biggest fan and he looked up to him.”

After Kale’s passing, the support that followed from the entire Montgomery County community showed how much Kale meant, not just to his friends and family, but to many others as well. The Charger family also made sure that anything the Galloways needed, they received.

“North feels like a second family to me,” he said. “Everyone knew Kale and had a smile put on their face because of him. They gathered around our family and took us in their arms. They were mourning just as much we were and we can’t thank everyone enough for that.”

Kale’s death had an impact on the entire community. North Montgomery, Crawfordsville and Southmont are rivals on the athletic field, but when a tragedy like this occurs, all three county schools came together as one.

“Kale was a community child, it really felt like,” Jessica said. “It started from the very beginning of his diagnosis. Everyone supported not just Kale in what he was going through, but our entire family in everything that we did. Because of the community that we live in I know that he’ll never be forgotten.”

“For Gage to turn such a negative situation into a positive one as he continues to strive for greatness is amazing to see,” Kyle said. “I think it’s really helped him develop into the man and the leader that he is today for us. I think our kids respect him for what he’s been able to do and overcome.”

Galloway and the Chargers are preparing to wrestle in the sectional Saturday at Crawfordsville. As the final page of Galloway’s wrestling career is just about written, he knows Kale is looking down on him with a big smile,  watching his older brother on the mat.

“I know he’s pushing me every single day both in athletics and in life,” Gage said. “I want to make sure that I do my best for him. Every time I think about him, he gives me a reason to keep going. He was one of the strongest people I ever knew and that’s something I looked up to him for to be as strong as he was.”