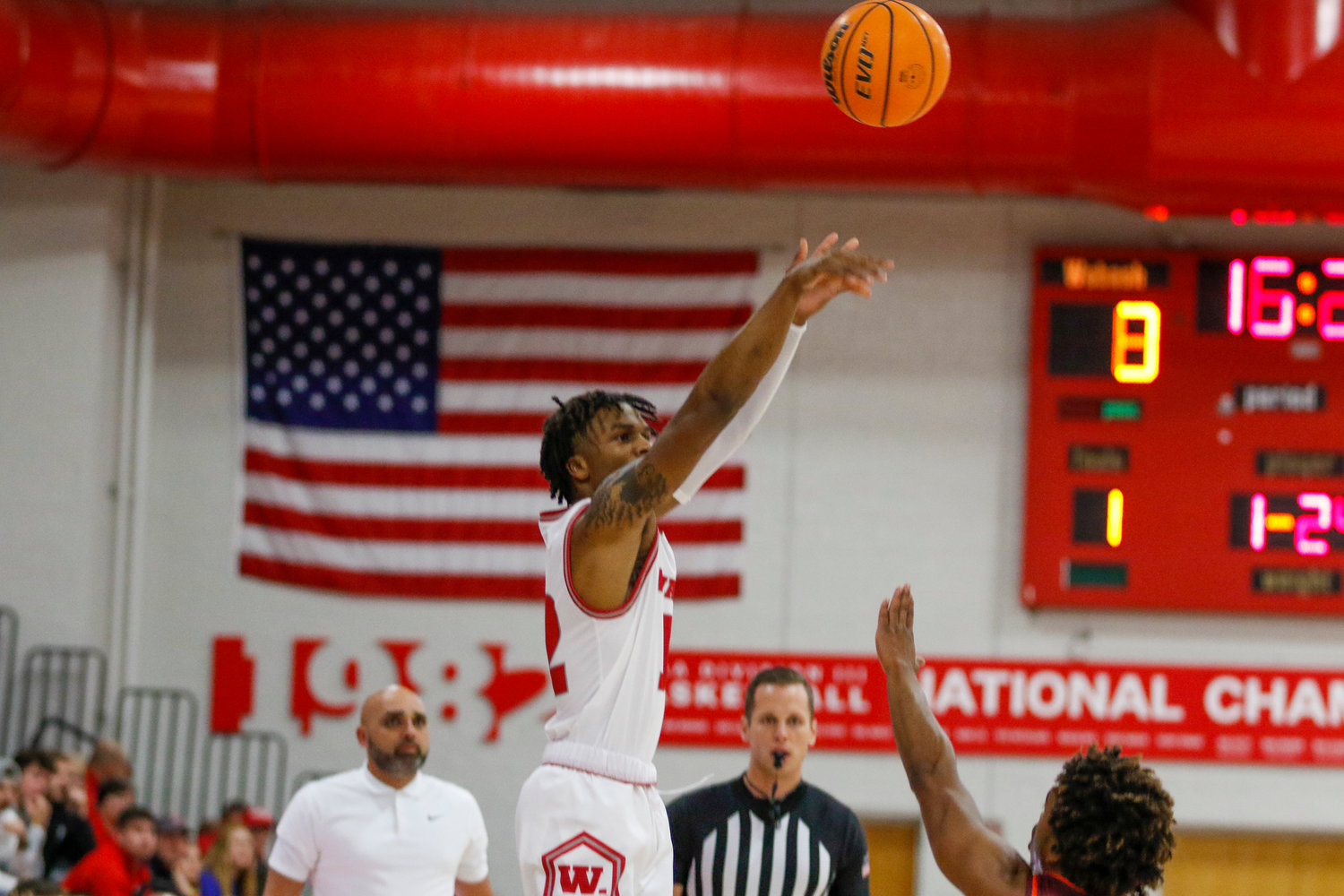 Edreece Redmond led Wabash with 22 points as Wabash improved to 4-1 on the season with their 84-74 win over Maryville (TN) on Saturday. Wabash had the pleasure of hosting the Great Lakes Invitational which is one of the premier tournaments in all of Division III hoops.
Photo Courtesy of Wabash College Athletics
Posted Sunday, November 20, 2022 2:13 pm
Blake Largent | Journal Review

A tough Friday loss in its opening game of the 2022 Great Lakes Invitational did not slow the Wabash College basketball team on Saturday. The Little Giants capped off the eight-team event with a balanced 84-74 win over Maryville College (TN).

“This one was an important one for us,” Head Coach Kyle Brumett said. “Last night didn’t go our way. And I wanted our guys to lead us in preparing the right way for this game. These back-to-backs are so similar to a conference tournament or the NCAA tournament. Maryville has a really good team; we were really excited to play them. I was excited seeing how these guys played.”

Wabash entered the contest after a narrow 89-81 overtime defeat to No. 17 Marietta. Against the Pioneers, the Little Giants had just two players in double figures, had their worst shooting performance of the season, were out-rebounded 42-35, and turned the ball over 12 times to Marietta’s three. Junior guard Edreece Redmond, Wabash’s leading scorer, posted just six points on 1-8 shooting on Friday. But a dynamic team effort, spearheaded by Redmond, led Wabash to its fourth win of the year and a bright spot to close the invitational.

“Today was just a big win for us coming off the loss last night,” Redmond said. “We have a saying: ‘Let’s find out.’ A lot of teams look at last year’s team. We had so much success and so many great players. We have a lot coming back that a lot of people don’t know about. This was a game we tried to rebound and bring the intensity, and we did pretty good tonight.”

The Little Giants and Scots battled early. Each team took the lead multiple times in the opening minutes, with Maryville grabbing a 16-13 advantage with 14:43 left in the first half. That, however, was the last time the Scots would see themselves in the driver seat. Redmond quickly answered with back-to-back scores, and Wabash never looked back. Four players ended the contest in double figures. Redmond lead all scorers, posting 22 points, one assist, one block, and a steal on 8-12 shooting from the field and 4-7 shooting from three.

“The balanced scoring was huge,” Brumett said. “It was really nice that Ahmoni [Jones] and Vinny [Buccilla] had big scoring nights [against Marietta] to boost their confidence. I think they kept us in a big game. But we really want to have five to six guys getting eight, nine, ten or more points. And I think the balanced scoring tonight is going to be something that separates us from some of the teams we play in league games.”

Wabash moves to 4-1 on the year, including a win over No. 16 Washington University (St. Louis) days ago. The Little Giants travel to the Ravens of Anderson on Tuesday for their final game before a slight break for Thanksgiving.

“I’m really happy with where we’re at, but I’m not surprised,” Brumett said. “There are a lot of tough things, adversity still to come. I’m really happy to be 4-1. I would’ve liked to be 5-0. But you move on to the next one. 4-1 is great, but we’ve got Anderson next Tuesday, and we have to continue to learn not just how to win, but to win the way we want to play.”

The Ravens enter Tuesday’s contest losers of two-straight possessing a 2-3 record. Wabash beat Anderson 96-84 in December of last year and holds a 30-10 record against the Ravens all-time.

“We’re a group that has to have a chip on our shoulder,” Brumett said of moving forward. “We have to go into each game knowing that people might think we’re too small or not big enough, labeling us in a way.”

Wabash and Anderson square off tomorrow at 7 p.m. before the Little Giants return to Chadwick Court on November 30 to take on Earlham College.