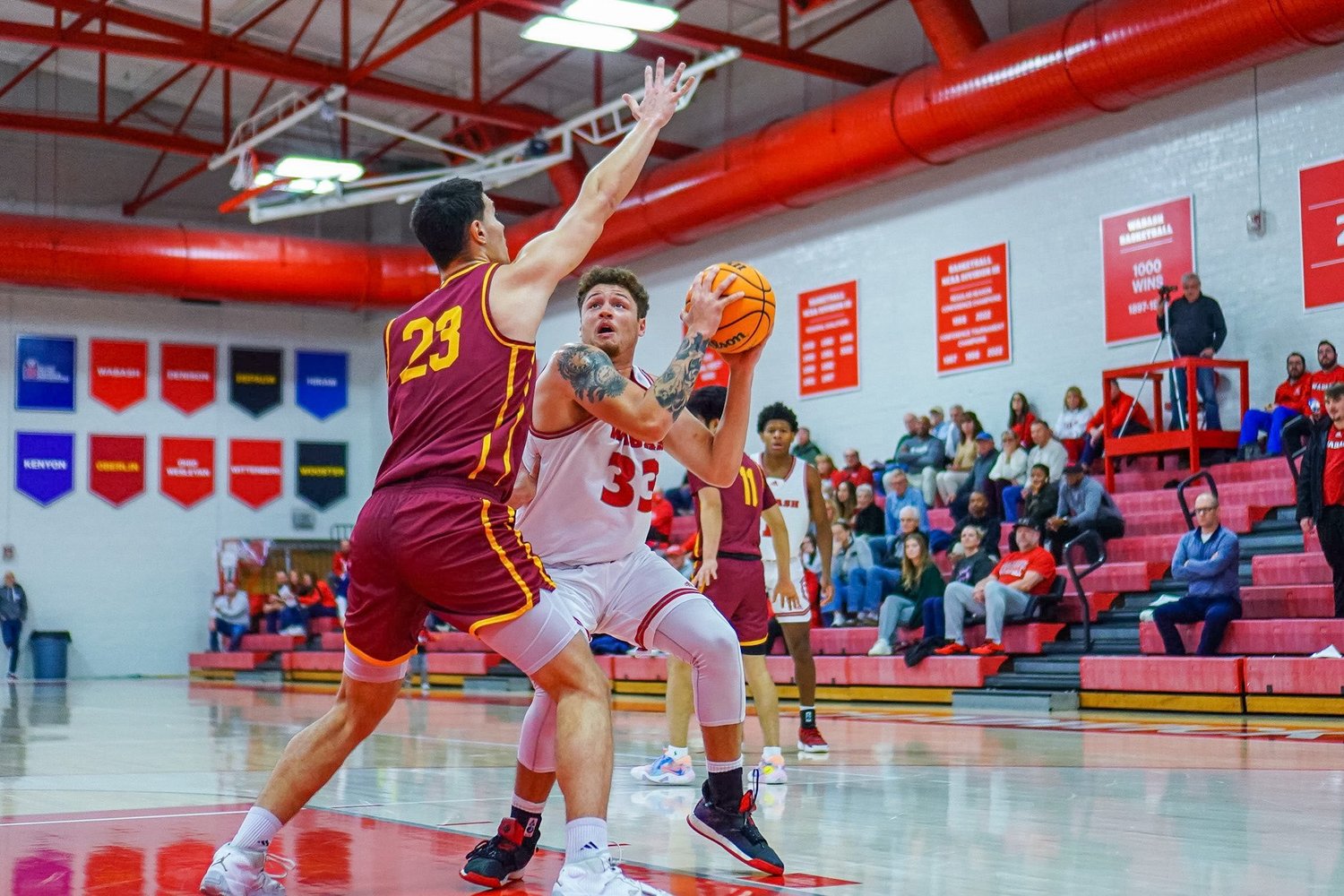 Wabash Always Fights. That’s the saying at Wabash College and it has lived true so far this season for the Wabash College Men’s basketball team. After a let down loss to Earlham earlier in the week, Wabash was back at Chadwick Court Saturday in their North Coast Athletic Confernce (NCAC) opener as the Little Giants hosted Oberlin. The game got off to a bad start for Wabash as Oberlin built a 21-7 lead. The Yeomen even built another 15 point lead in the opening minutes of the second half, but when they scoreboard hit zeroes, Wabash came out on top 80-78 as the Little Giants found a way to come out on top.

Arguably the turning point of the game came at the 3:32 mark of the second half as both teams were trading baskets and had the gmae tied at 67-67. A player on Oberlin’s bench received a technical foul and Avery Beaver knocked down both free-throw to give Wabash a 69-67 lead. Then on defense Edreece Redmond drew a charge which was followed by a Champ McCorkle two. It was yet another gutty win for Wabash and coach Kyle Brumett noted how down the stretch his team got the best shots they could and made them.

“We were 18-22 in the second half on our two’s and you just have to have enough poise and patience to see if the other team can guard your stuff,” Wabash coach Kyle Brumett said. “In the first half we were settling a bit too much and that’s because I think in our early games we were shooting it so well from three. The thing I’m probbably most proud of is that the guys who played so poorly in the first half, played so well late in the game.”

In the first half Oberlin made 6-12 from three and ended the game shooting 8-21. Dimitrije Radusinovic led all scorers in the game with 29 points with Dorde Osasevic scoring 17. Yuuki Okubo added 14 for the Yeomen who fall to 3-6 (0-1 NCAC).

Balanced scoring continued to showcase itself for the Little Giants as Ahmoni Jones led Wabash with 16 points. Sam Comer scored 14, with both Champ McCorkle and Edreece Redmond scoring 11. Beaver added eight, Vinny Buccilla seven, both Josh Whack and Gavin Schippert five, and Styles McCorkle rounded out the scoring for Wabash with three.

“I’m really hard on our guys, especially our older guys who I love and who have been around me awhile,” Brumett said. “Our plus-mius was pretty bad with our starters but then you look at the second half Sam, Champ, and Edreece were all +16 and Ahmoni was +13. Those were the same guys that got the brunt of my wrath at halftime. Hopefully this is a leadership moment and a monent of growth for us.”

What’s been something of note for Wabash is that as they improve 6-2 (1-0 NCAC) on the season is that how they just continue to find ways to win close games. In their season opener vs Mt. Saint Joseph they won by three, beat Washington University (St. Louis) by three, lost to a very good Marietta team in overtime, beat Anderson by two, and now Oberlin by two. Brumett knows and now the Little Giants do as well that they will be tested each and every time they take the floor.

“If we learned anything from the Earlham game, this group for this year should know that every game is going to be a battle. What these close games tell me about our guys though is that they care a lot and this is very important to them. They stayed together in these games and today was the best example of that. What these games also say is that our margin for error is not very big. We’re not the team of last of last year where we’re going to be putting up 90 every game. We have to be smart out there and despite what anyone’s record might be that we’re going to be tested.”

Wabash will be back in action on Tuesday when they travel down to Bellarmine for what will be an exhibition game for each team. They’ll be back at Chadwick Court on Saturday for another NCAC tilt when they host Denison.