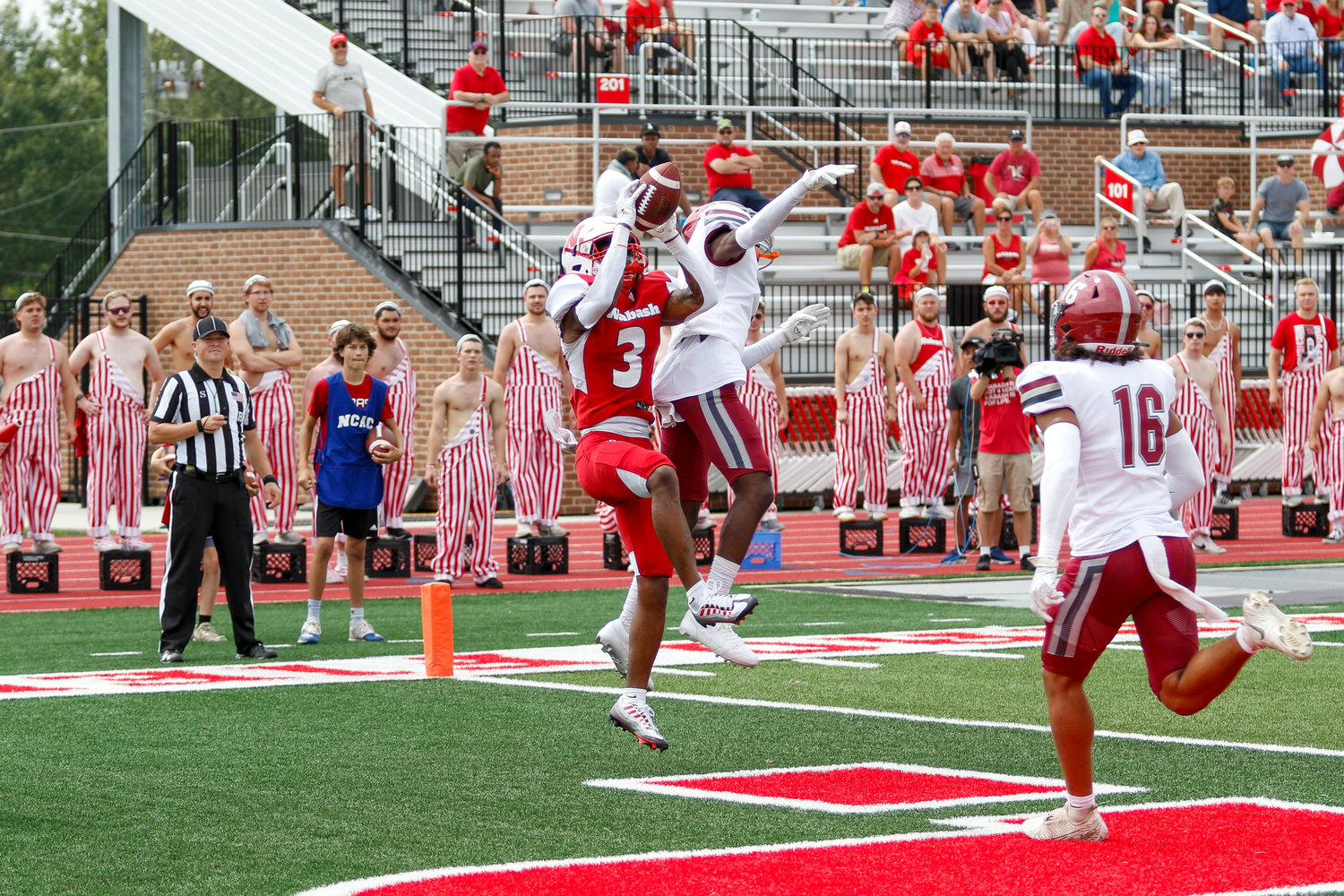 The saying that will never die at Wabash College is ‘Wabash Always Fights’. As the Little Giants opened up their 2022 football season at home on Saturday, that saying rang loud and true once again as Wabash rallied multiple times in the fourth quarter to defeat Hampden Sydney College 52-48.

It was never easy for the Little Giants who routinely trailed by two scores until the first few minutes of the fourth quarter. Junior signal caller Liam Thompson found Derek Allen for a 27 yard strike to cut the Tiger lead to 42-37 with 11:27 to play. When they needed it most, Wabash’s defense forced a stop and Thompson and the offense took the lead on a 26 yard scamper by Thompson which gave the Little Giants a 45-42 lead after a successful two-point conversion.

As they did for most of the game, the Tigers marched right down the field and took the lead right back at 48-45 with 6:07 remaining. After Wabash couldn’t convert a fourth-down conversion, their defense got another stop and with 3:28 remaining the Little Giants methodically marched down the field and Donavon Snyder capped off a nine-play 63 yard drive with a 15 yard rushing score to put Wabash back in front at 52-48 with just 46 seconds left. To seal the win sophomore Garret Mroz intercepted the Tiger pass and Wabash would begin their 2022 campaign at 1-0.

“We need to fix some things on defense and I’m confident that we will,” Wabash coach Don Morel said after the win. “This wasn’t the performance that we wanted and Hampden Sydney did some stuff we weren’t quite ready for. On offense we were able to take advantage of them playing man coverage and we wore them down I think as the game went along. We couldn’t of asked for anything better on that side of the ball.”

Thompson threw the ball for 380 yards and four touchdowns while running for another 102 yards and two scores as the junior would not let his team see defeat in their season opener. Allen had a monster game through the air with 160 yards and three scores while Cade Campbell (69 yards) and Snyder (61) provided a two-headed rushing attack. Wabash in the win tallied 663 yards of total offense.

“We knew that we had to take advantage of every opportunity that we had as an offense,” Thompson said. “Our defense came up big when we needed them to so we just continued to chip away and were able to get the job done. I have the up-most trust in guys like Derek to be able to catch anything I throw his way. He’s a great athlete and a great receiver and I knew I was going to put a little more on him today and he made the most of it.”

Morel also noted how the Tigers for the last decade have primarily played zone coverage on the defensive side of the ball. However against Wabash, it was man coverage the entire game which allowed players like Allen, Cooper Sullivan and the rest of the talented Little Giant offense to shine.

“I know when I see other teams playing man coverage, I just have to know that I’m better than the guy lining up across from me,” Allen said. “I told Liam to just throw it up and I’ll come down with it.”

Wabash begins it’s 2022 campaign at 1-0 on the season. The challenge gets even tougher next week as the Little Giants will host the No. 2 ranked team in Division III when North Central College makes the trip to Crawfordsville. The Redbirds were the 2019 DIII champions and have lost just two games the last two seasons.

“I think this was good for us to have this kind of battle in our first game,” Thompson said. “It will allow us to watch things on film and get things cleaned up. We’ll be ready for next week.”