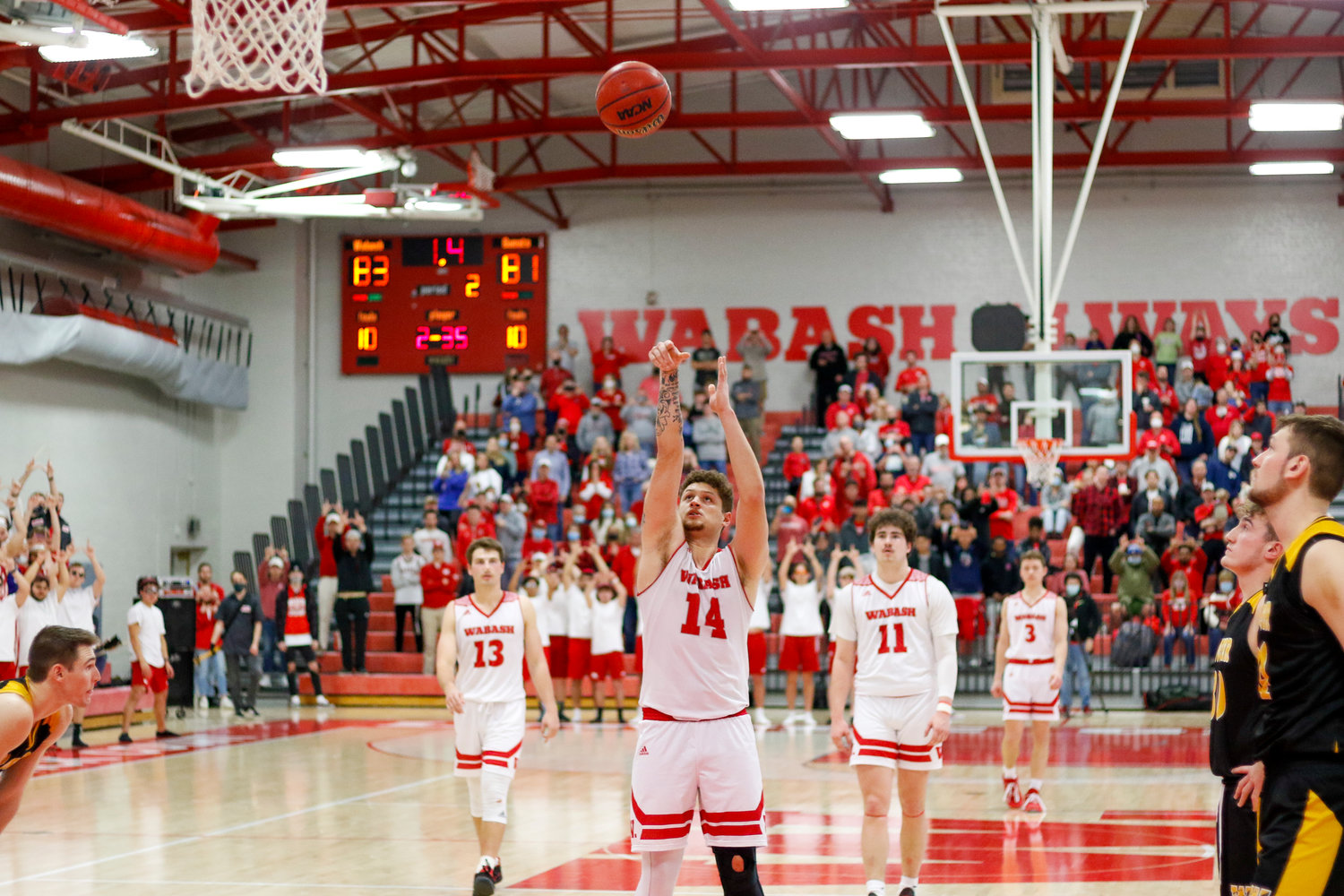 Senior captain Ahmoni Jones is the lone senior for the Little Giants this season. He alongside a plethora of juniors will look to lead Wabash to another North Coast Athletic Conference title.
Photo Courtesy of Wabash College Athletics
Posted Tuesday, November 8, 2022 2:51 pm
Codey Emerson | codey@jrpress.com

It still feels like yesterday where Wabash College men’s basketball was competing in the 2021-22 NCAA Division III Men’s Basketball Final Four in Fort Wayne. But now it’s time for the 2022 -23 rendition of the Little Giants to take the court as Wabash opens its season Tuesday night when they host Mt. Saint Joseph inside Chadwick Court.

While there won’t be a Jack Davidson, Tyler Watson, or a Kellen Schreiber on the team this season, this season Wabash still has expectations. In the pre-season NCAA DIII Pre-Season Top 25 Poll the Little Giants sat exactly one spot outside the Top 25 and were also projected to finish third in the North Coast Athletic Conference.

“This season will be more a collective effort with our entire team. That’s really the exciting part of my job is while we’re going to miss all of those guys from last year, this group of guys has really been learning and waiting for their turn,” Wabash coach Kyle Brumett said. “I’m really happy with how our returning guys have looked to try and emulate the work ethic of that team from last year while at the same time try to put their own leadership and stamp on this team.”

Senior captain Ahmoni Jones returns to the Little Giants as he averaged 13.9 points and 6.3 rebounds a season ago. Junior Edreece Redmond and Sophomore Vinny Buccilla will also play a key role for Wabash as they provide a great balance of shooting and defense. Fellow juniors Champ McCorkle, Avery Beaver, Sam Comer, Turner Royal will also help round out the rotation for Wabash.

“All of our returning juniors will be ready because they’re all really good players,” Brumett added. “I think that might surprise some people. There will be some growing pains with this group but it will only benefit us in the long run. The previous group went through the same things and these guys will have to know what it takes to go on the road in the conference and play teams a second time and also play teams in this early part of the season who we really don’t know much about.”

The early portion of the non-conference schedule for the Little Giants will poise some definite challenges as along with Mt. Saint Mary’s the Little Giants will host No. 16 Washington University on Friday night. The first road test of the season for the Wabash will be next Tuesday when they travel to take on Hanover. After those three games Wabash will be back at home to host one of the premier Division III tournaments in the country in the Great Lakes Invitational on Nov. 18-19.

Along with the Wabash seven other premier D3 schools will converge onto Chadwick court as Trine, Benedictine, Baldwin Wallace, Rose Hulman, Keene State, Marietta, and Maryville (TN) all compete in the two-day tournament. Wabash on Nov. 18 will take on No. 17 Marietta followed by a contest with Maryville on Nov. 19. Both games are slated for a 7:30 pm tip.

“We want to challenge ourselves in the non-conference,” Brumett said. “Early in the season it’s not going to be the big flashy things that allow you to beat good teams, it’s going to come down to the little things and if we do those things well then I feel like we’ll start out pretty good. This schedule is fun. We have 15 home games which is exciting when you think about the environment that we play in at Chadwick Court. Getting to host the Great Lakes Invitational is going to be real fun and I hope that Crawfordsville enjoys it. I’m really happy with the teams that are coming and it’s going to be a great two days of basketball.”

The season for the Little Giants will be an exciting one for sure and Chadwick Court will be electric all season long as Wabash begins its new journey looking to defend its NCAC title.