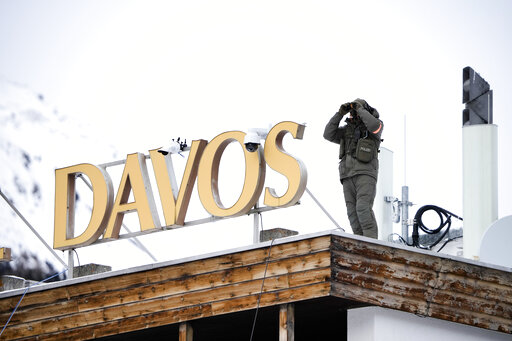 A police officer stands on the roof of a hotel and monitore the area with a binocular in Davos, Switzerland Monday, Jan. 16, 2023. The annual meeting of the World Economic Forum is taking place in Davos from Jan. 16 until Jan. 20, 2023. (AP Photo/Markus Schreiber)
Posted Tuesday, January 17, 2023 5:56 am

Ukraine's first lady hit out at Russia as the anniversary of the war in Ukraine nears, saying parents are in tears watching doctors trying to save their children, farmers are afraid to go back to their fields filled with explosive mines and that “we cannot allow a new Chernobyl to happen."

Olena Zelenska also scolded government leaders and corporate executives in a speech Tuesday at the World Economic Forum gathering in the Swiss town of Davos for not always using their influence to do enough.

With the war raising inflation and expanding food insecurity in developing nations, she called it “an insult to mankind and human nature to have mass starvation."

She says the war can expand beyond Ukraine's borders and worsen the crises but “unity is what brings peace back."

Zelenska says she brought letters from Ukrainian leadership to European Commission Ursula von der Leyen and to Chinese President Xi Jinping that she will give to Vice Premier Liu He, who's speaking Tuesday at Davos along with von der Leyen.

The head of the International Energy Agency says Russia’s invasion of Ukraine has spurred new support for renewable energy as worries over security of supply join environmental concerns.

He says the disruption of oil and natural gas supplies from Russia means that “the biggest driver of renewable energy growth today is energy security ... because home-grown renewables are the energy of peace.”

Birol cited as progress the shift to battery-powered cars, saying they were only 3 in every 100 vehicles sold in 2019 but reached 13% last year. He says every other car in major markets will be electric by 2030.

He welcomed government support like the Inflation Reduction Act in the U.S. and the EU’s Fit for 55 goals but warned that rich countries’ efforts won’t be enough if developing nations can’t afford the transition to energy sources that emit less climate-changing carbon dioxide.

Right now, Birol says there is $1.50 in investment in clean energy for every $1 investment in fossil fuels: “If we want to reach our target, the ratio needs to be one to nine.”

Polish President Andrzej Duda is predicting that the German government will agree one day to send powerful Leopard tanks to Ukraine, citing Germany’s membership in NATO and rising public support for Ukrainians beleaguered by Russia’s war.

His Lithuanian counterpart, Gitanas Nauseda, quickly replied: “I mention that Ukraine will win this war.”

Ukrainian President Volodymyr Zelenskyy have been clamoring for more supplies of Western weaponry like tanks and air defense systems nearly a year into the war.

Duda said it was an “important moment” that NATO members, like Britain have vowed to send modern tanks to Ukraine, which could affect the thinking of Chancellor Olaf Scholz’s government.

Scholz, who is speaking at Davos on Wednesday, has said Germany will “weigh every step carefully” and consult with its allies on further weapons deliveries to Ukraine.

— Business trusted most in a more polarized world, report says