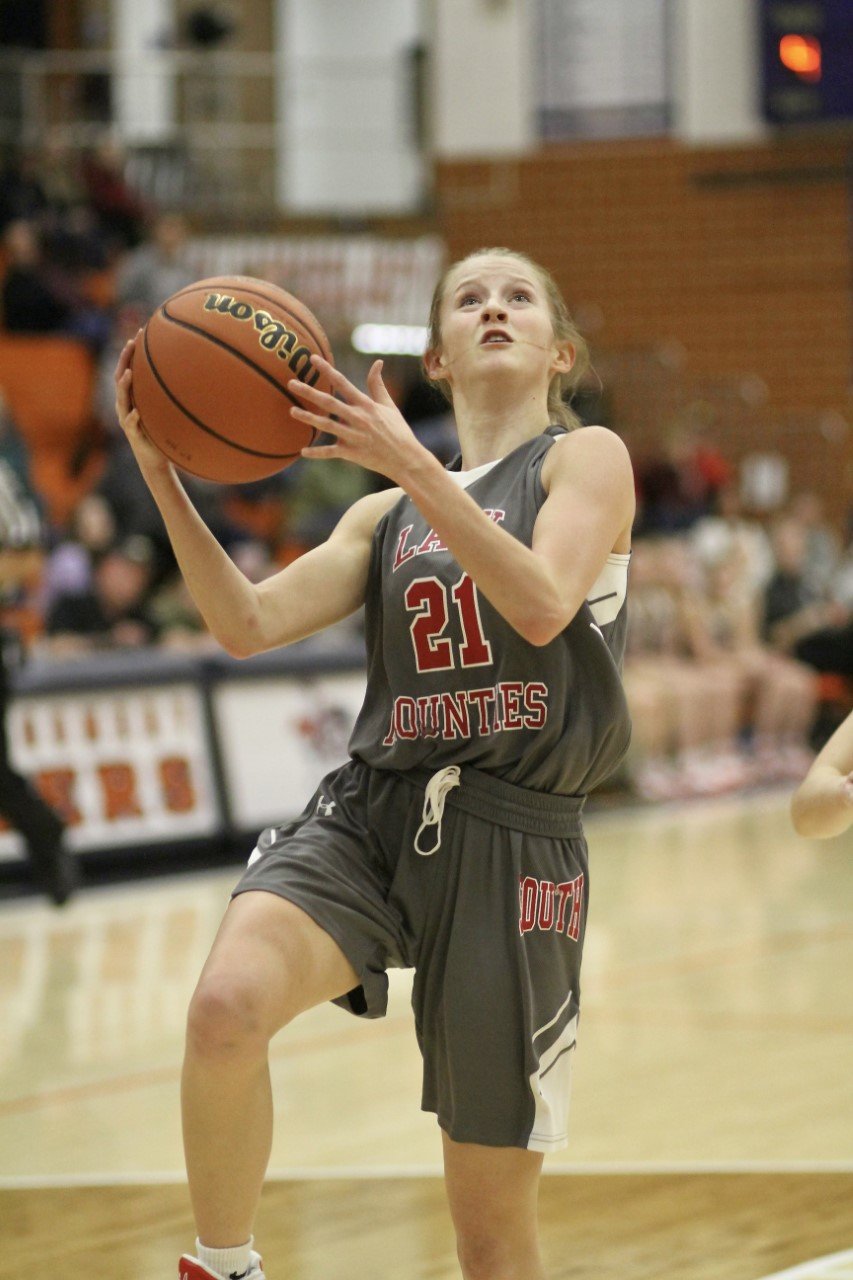 DeLorean Mason added to her state-leading steals per game as the Southmont junior swiped 8 passes to go along with a game-high 19 points in the Mounties 42-32 win over county rival North Montgomery on Thursday.
Lori Poteet/Journal Review 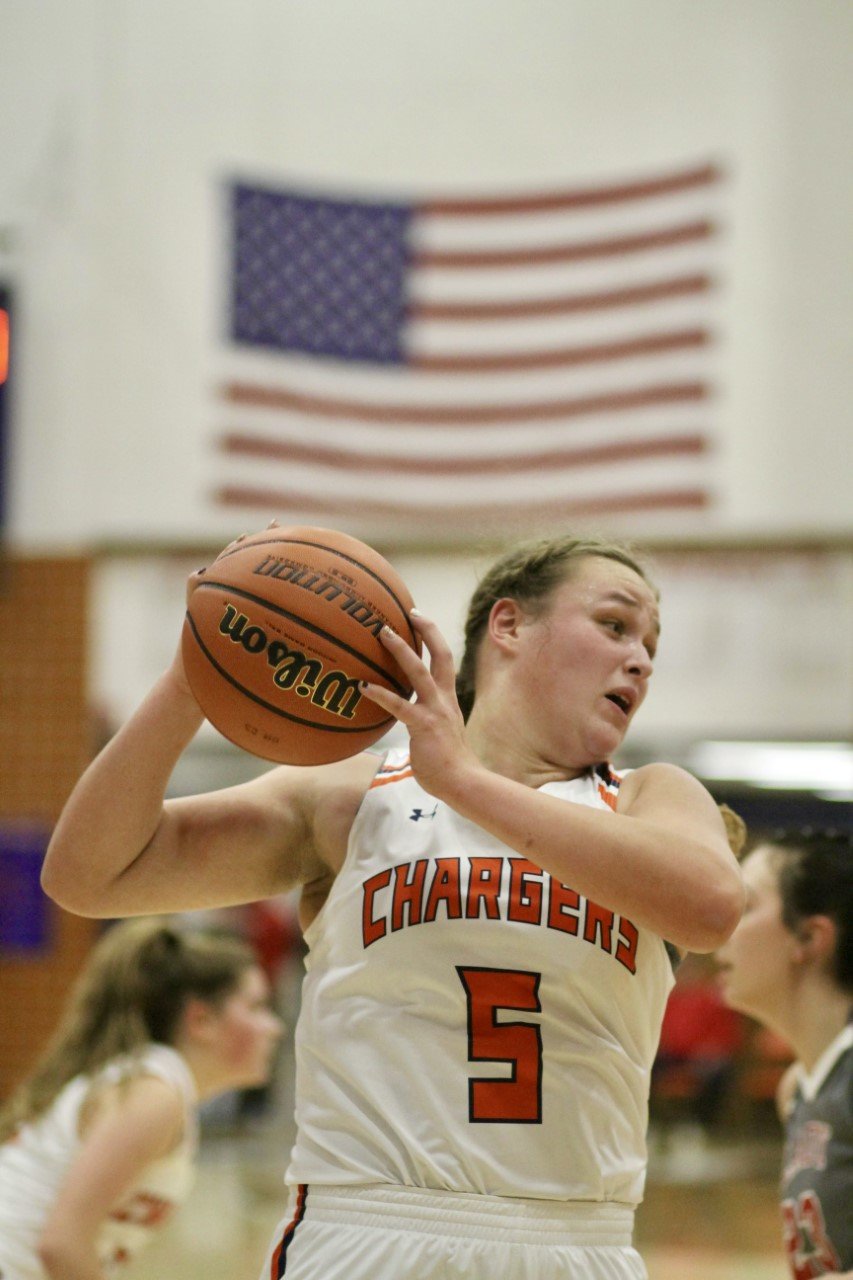 Piper Ramey notched another double double for the Chargers with 13 points and 12 rebounds.
Lori Poteet/Journal Review 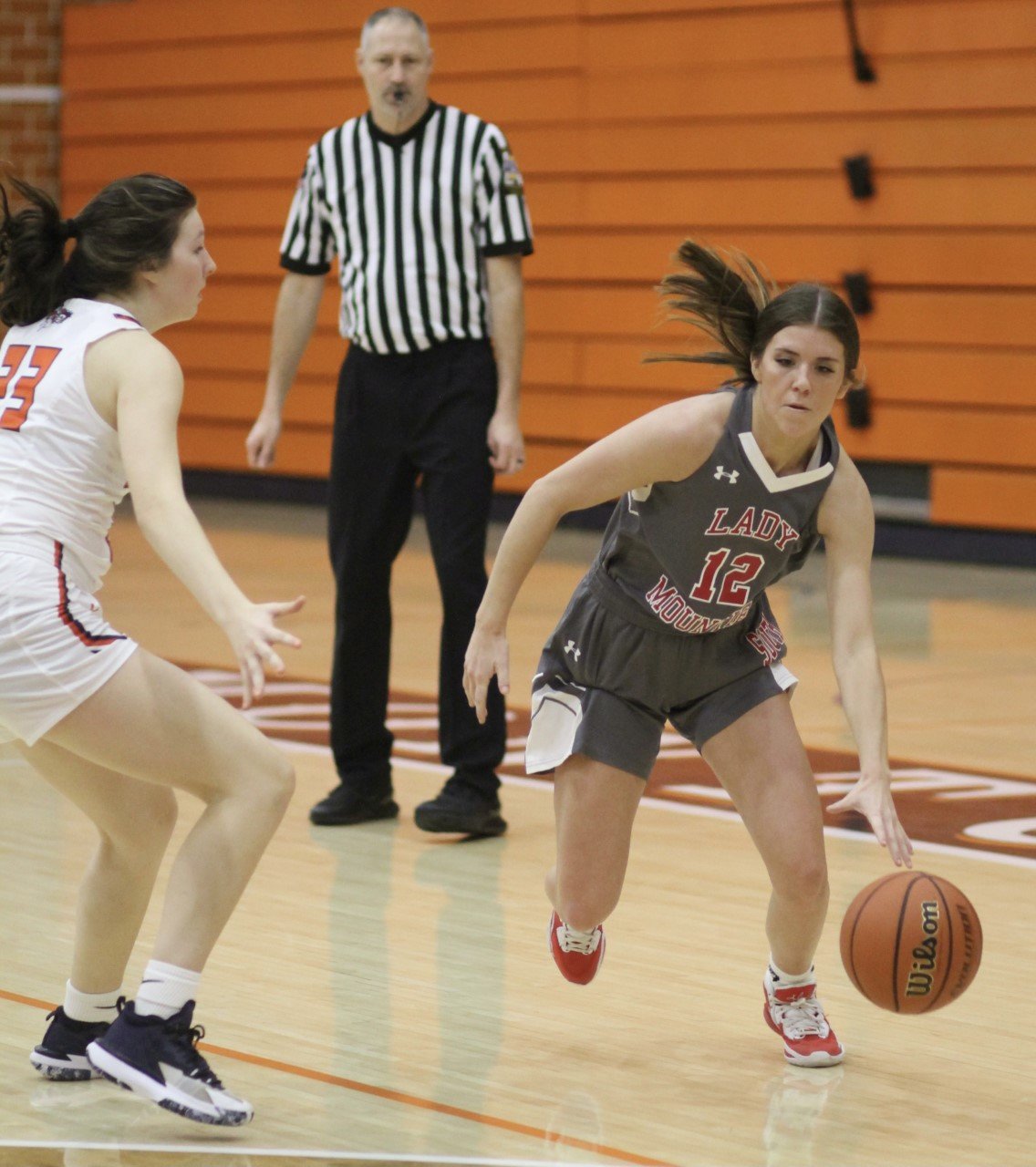 Chelsea Veatch got the Mounties going early with some good offense in the first quarter.
Lori Poteet/Journal Review 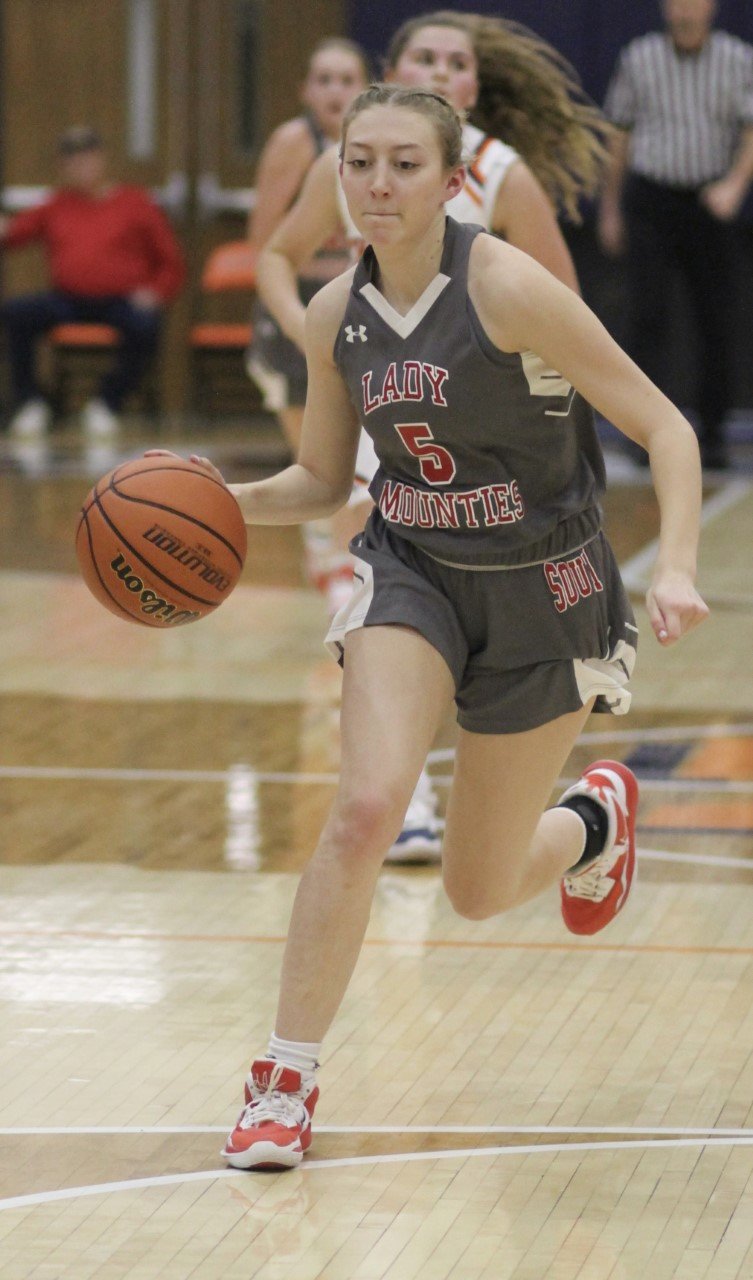 State Leaders in Steals Per Game

LINDEN — Southmont junior DeLorean Mason is the leader of the Mounties. Coach Dan Burkman asks so much of his best player and often she performs up to par. Coming into Thursday’s county matchup against rival North Montgomery, Mason was the state leader in steals per game with 6.6. Thursday against the Chargers Mason added eight more to her state-leading total and also led the Mounties with 19 points as Southmont defeated North Montgomery 42-32.

The Chargers despite trailing 23-10 at halftime made a fourth quarter run as Blair Nichols drained a three to cut the Mountie lead to 35-29 with 2:27 left. Timely free-throws and solid defense down the stretch allowed the Mounties to hold on for the win.
“We had some goals tonight that offensively we wanted to accomplish,” Southmont coach Dan Burkman said. “We still are having way too many missed layups right at the basket and if we finish those the complexity of the game changes. I give credit to North as they kept battling. Overall I was happy to come out with a county and conference win.”

Along with Mason’s 19 points and eight steal performance, Chloe Jenkins added 12 for the Mounties. Chelsea Veatch scored seven while both Olivia Gray and Cheyenne Shaw scored two. In her first two games back from break, Mason has scored 37 points and has 14 steals. Burkman has taken notice of his star players play and hopes she can continue this stellar stretch.

“I’ve been pretty demading of her since she was a freshman and it’s nice to see her start the year like this,” he said. “She looks like she has more confidence in herself and is playing under more control. She still makes mistakes here and there but she is getting better at that.”

The Chargers miscues in the game cost them chances to make the score closer as they turned the ball over 27 times and went just 8-18 from the foul line. Charger coach Ryan Nuppnau talked about how unfortunately for his young squad that has been a theme this season.

“We’ve fought our way back plenty this season, but just haven’t been able to get over the hump and tonight was another example of that,” he said. “A lot of it comes down to us understanding that we have to more mentally focused because every possession in a close game like that matters. It’s something we’ve been talking about and hopefully soon our killer instinct and will to win will come out of us.”

Sophomore Piper Ramey led the Chargers with 13 points and ended with 12 rebounds. Both Macee Norman and Kaydence Young chipped in with five for North Montgomery while Blair Nichols, Krestyn Bradford, and Jadelyn Phillips all drained a single three to end with three points.

“We’re asking a lot of Piper and I’ve really been proud of her and her ability to adjust to do all the things we’ve asked of her. Tonight we asked her to get the ball across against their 1-3-1. As usual she had all eyes on her and was still able to score 13 points for us and play all 32 minutes and be the bulldog that we needed her to be.”

The Mounties defense which continues to be their calling card on the year is led by some players that may not fill up the box score with points and rebounds. Burkman though sees the work that those girls do during the game and made sure to give them the credit they deserve.

“Up top when we have Chelsea and Olivia along with DeLo play that 1-3-1, they cause problems for a lot of teams,” Burkman said. “Those girls are so fast to the ball and I’m glad they’re leading the way on that end because our defense continues to lead us while we’re figuring out how to clean up our offense.”

The Chargers with the loss fall to 3-15 (1-3 SAC) on the season. They will return to action on Tuesday when they are back at home against Greencastle.

Southmont picks up their eigth win of the year and first SAC win as they improve to 8-8 (1-3 SAC). They will now have eight days off before their next game next Friday when they welcome Seeger for a girl/boy double-header.

“There’s a lot of winnable games left in this final month of the regular season for us,” Burkman said. “I went through it with the girls and they know what my expectations are and I think they share that same expectation.”