Mounties hold on against Stars, face Athenians for SCC title 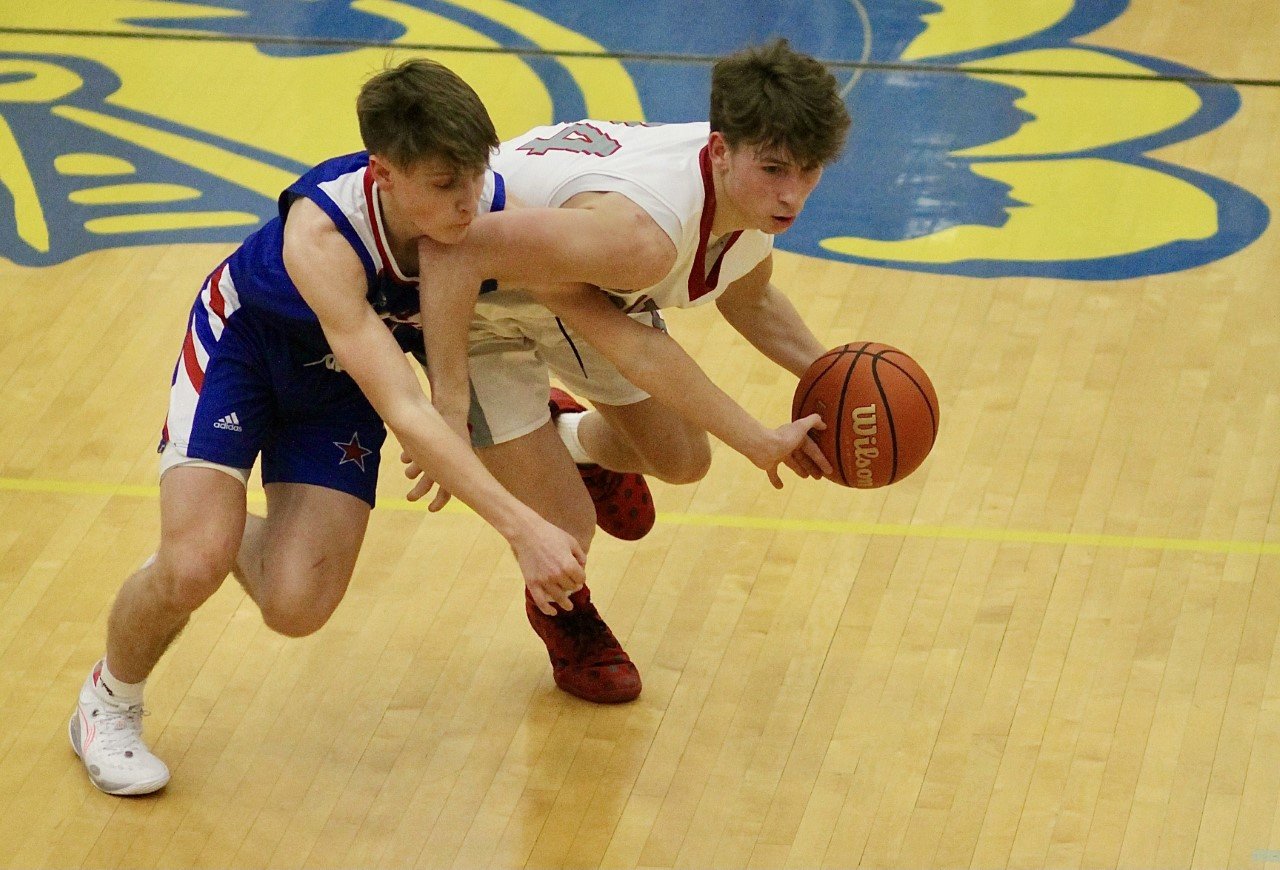 Southmont’s EJ Brewer provided the Mounties with the senior leadership they needed on Friday to hold off Western Boone as South is once again back in the championship game of the Sugar Creek Classic.
Lori Poteet/Journal Review 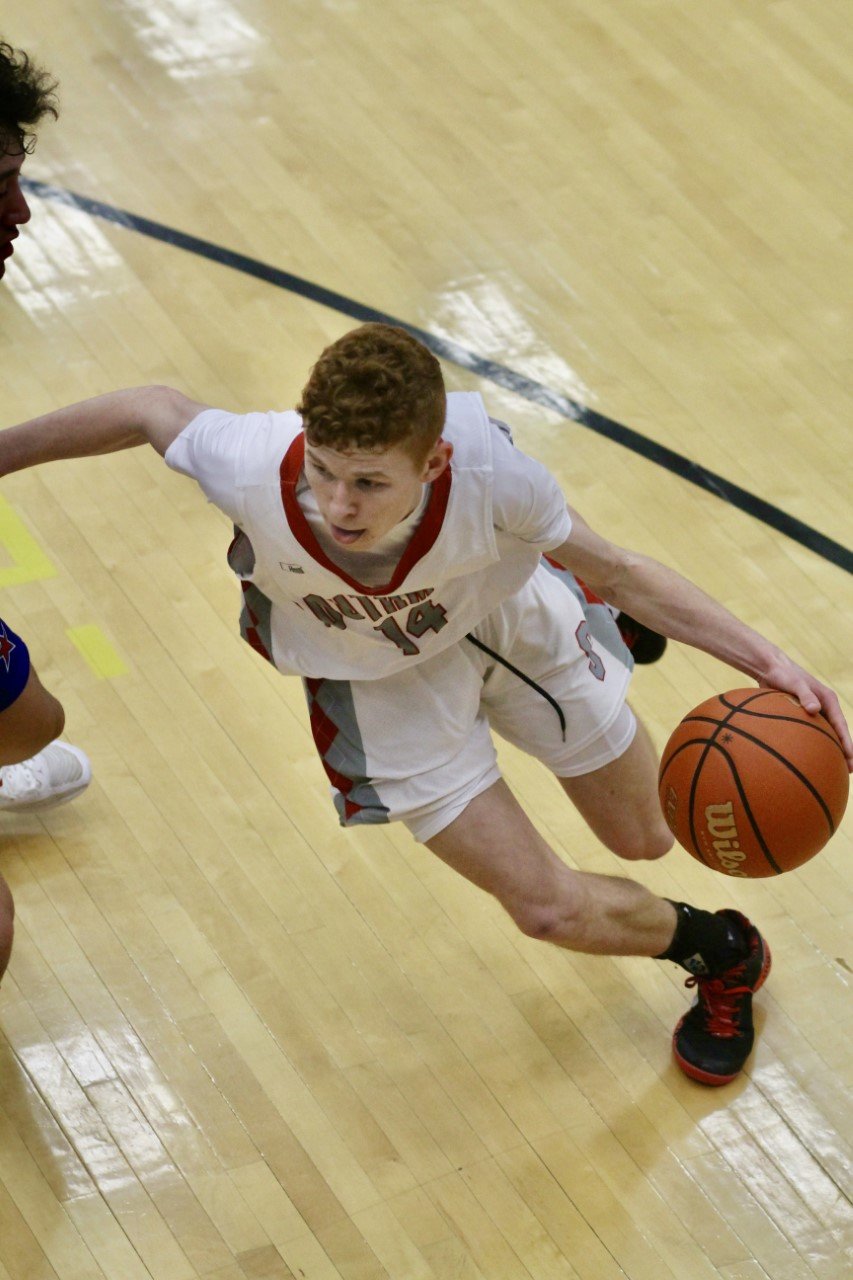 Back on Dec. 16 Southmont and Western Boone boys basketball played a very competitive game with the Mounties coming away with a 36-28 win. Friday night the two teams met up yet again as they opened up the 16th annual Boys Sugar Creek Classic at Crawfordsville. Early on the game was controlled by the Stars as they led 10-3 in the opening minutes. After the first quarter the score read 12-8 Stars and the battle was on. The two teams went back and forth for the remainder of the game and entering the final eight minutes of play South trailed 32-30. However the Mountie offense came alive in the final quarter outscoring the Stars 18-8 as South prevailed again for a 48-40 victory.

Trailing 35-32, the Mounties mounted a 10-0 run to lead 42-35. After that five straight points by the Stars made the game 42-40 Mounties with 1:58 left to play as Luke Barta made a pair of free-throws. Following that South went a perfect 6-6 from the foul line as the Stars couldn’t complete the comeback as the Mounties advanced to the championship game for the second straight season.

“A win is win and I’m proud of the way we responded in the second half,” Southmont coach Jake Turner said. “Sometimes in a game like this you can put too much pressure on yourself and maybe that was a little of the case in the first half. Some guys were trying to do too much and rather being patient, we pressed. Our defense buckled down in the second half and allowed to stay in this game. I told the guys though and they know it that we’ll have to play better tomorrow to bring home a championship.”

South’s two leading scorers in Carson Chadd and EJ Brewer both were held scoreless in the first half. Thankfully the play of Vince Reimondo, who scored nine, Trip Ward and Kyler McCandless, their play allowed the Mounties to stay in the game. Ward scored a game-high 14 to lead the South including going 5-6 from the charity stripe. Reimondo ended with 11 with McCandless adding nine. Chadd ended the night scoring eight and Hayden Hess, Lucas Oppy, and Brewer all ended the night with two.

“We stayed in the game thanks to our defense and not allowing them to grab one offensive rebound,” Turner said. “Vince is only getting better and more confident with his play. Trip also hit some big shots and then Kyler is a guy who gives it all he’s got when he’s in there. He gave us nine huge points and always plays great defense. At the end of the day we’re a team and we win or lose as a team and tonight we were able to come out on top.”

The Stars were led in scoring by Kaden Bennington who scored 12. Six other players ended up in the scoring column as Barta scored six with Jaxson Gott, Blake Miller, and Marcus Stepp all scoring five. Gavin Hawkins added four and Marcus Fortner rounded out the scoring with three. Stars coach Dustin Oakley noted how the difference at the free throw line was key in the loss as the Stars shot just four free-throws compared to South’s 16.

“That was the story the first time we played them too,” Oakley noted. “I thought too we were really efficient and patient on offense in those first three quarters, but in that fourth we lost that a few times. I thought we could’ve gotten better looks and when South gets those stops and goes down and converts because we foul them, it’s hard to overcome that. I like how we fought back and I liked us in that position. We put ourselves in a good position to win, we just didn’t make winning decision and winning plays to finish it out.”

The loss for the Stars sees their record slip to 1-8 on the season, but it’s now the sixth time in their eight losses that the game has been decided by single digits. Western Boone now gets a crack at North Montgomery in the consolation game tomorrow back at Crawfordsville.

“We’ve been in this position a lot the last three years where we keep fighting in games but just can’t seem to pull out a win and we get on losing streaks,” Oakley said. “It sucks losing eight in a row after winning our first one of the year, but our guys have the right attitudes and mentality and we’ll come out tomorrow and be strong.”

Southmont with the win improves to 7-2 on the season. The Sugar Creek Classic title alluded the Mounties a season ago. Now they’ll have the chance to make amends for that loss as they’ll get the Athenians once again on Saturday.

“Right now we’re happy and relieved that we made it back to the championship game,” Turner said. “Crawfordsville is a tough team and they’re obviously well coached and I know Coach Pierce will come with a great game plan. It’s going to be a game that probably comes down to the fourth quarter and whoever executes better will come out on top.”