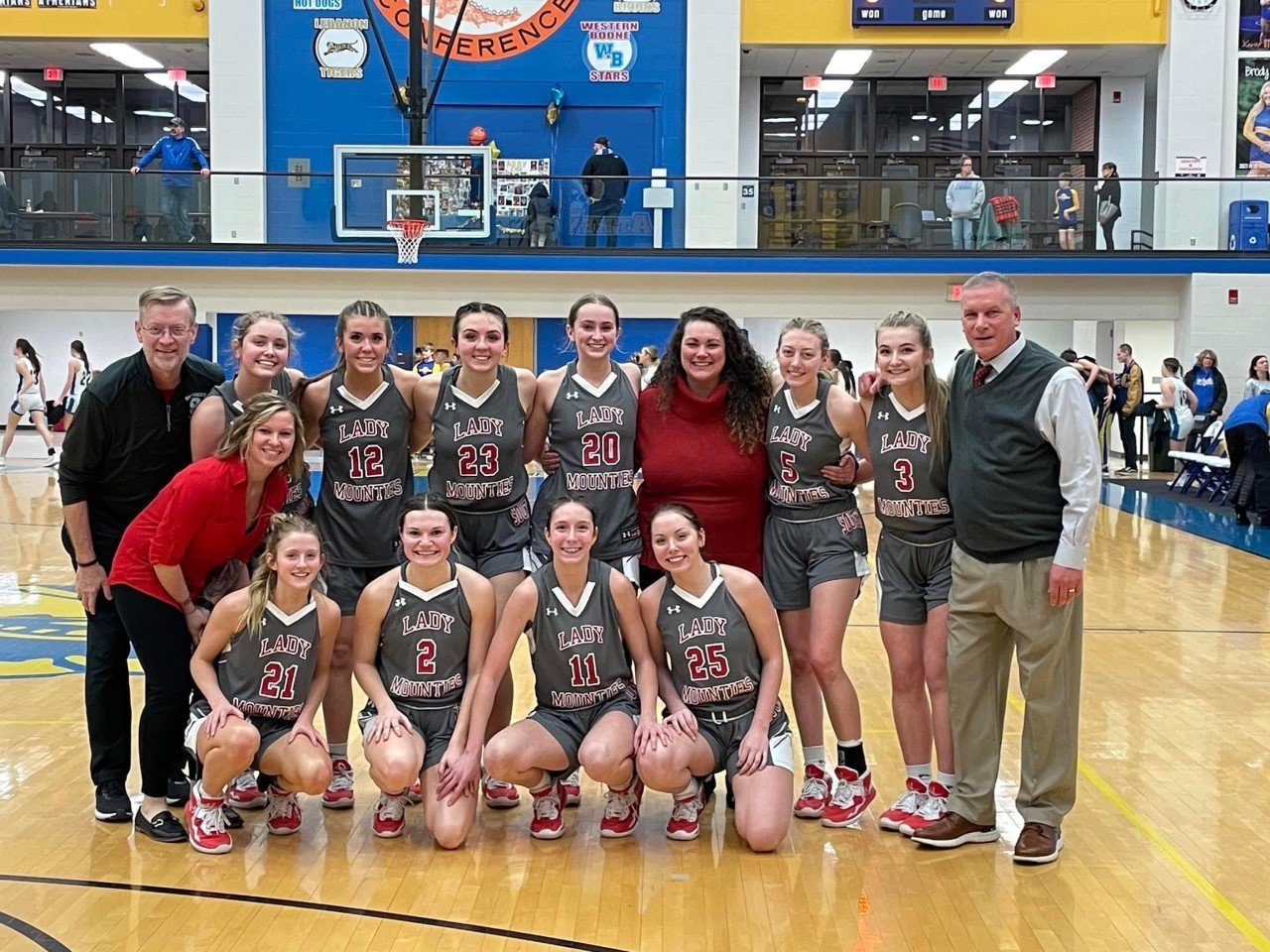 Southmont girls basketball saved their best performance of the season for Saturday as they defeated county rival Crawfordsville 66-34 to claim the county title.
Photo Courtesy of Jenny Veatch 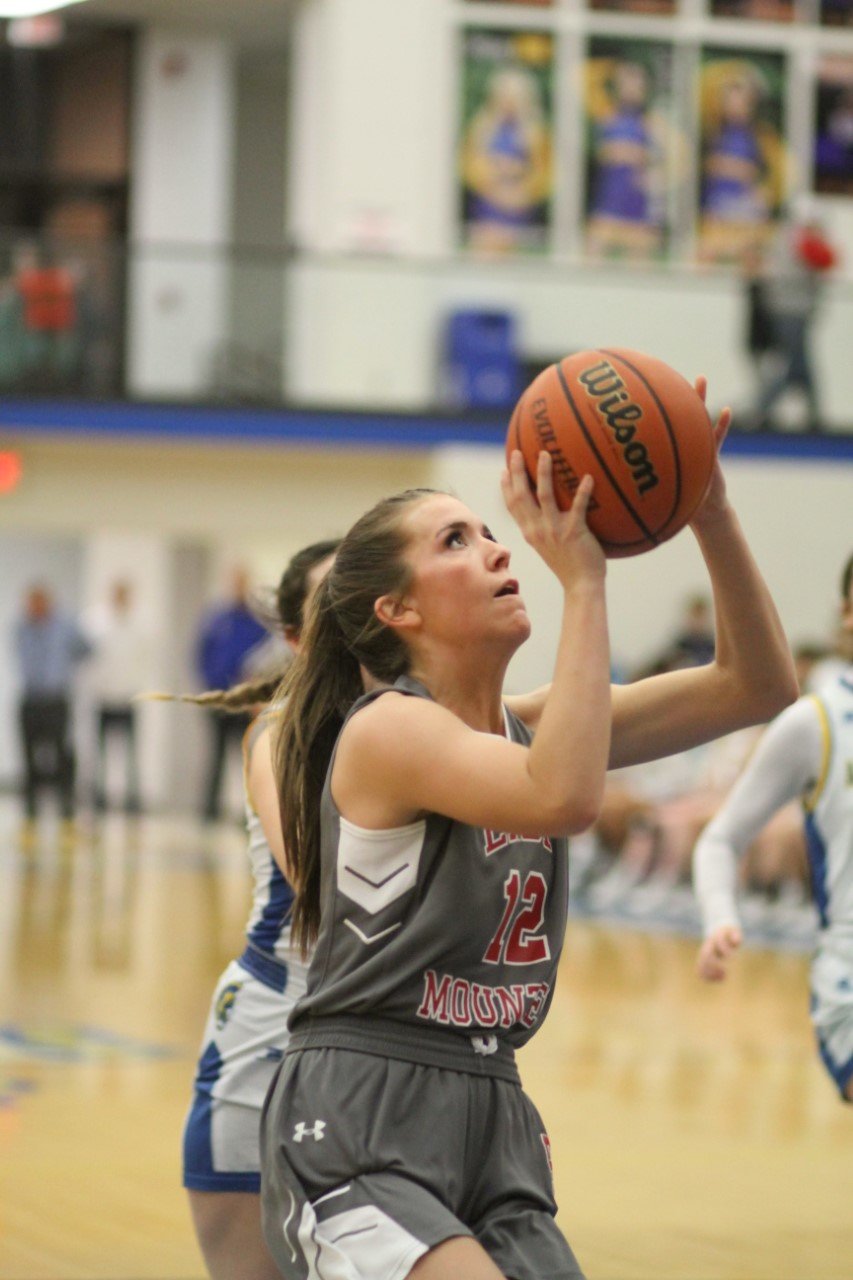 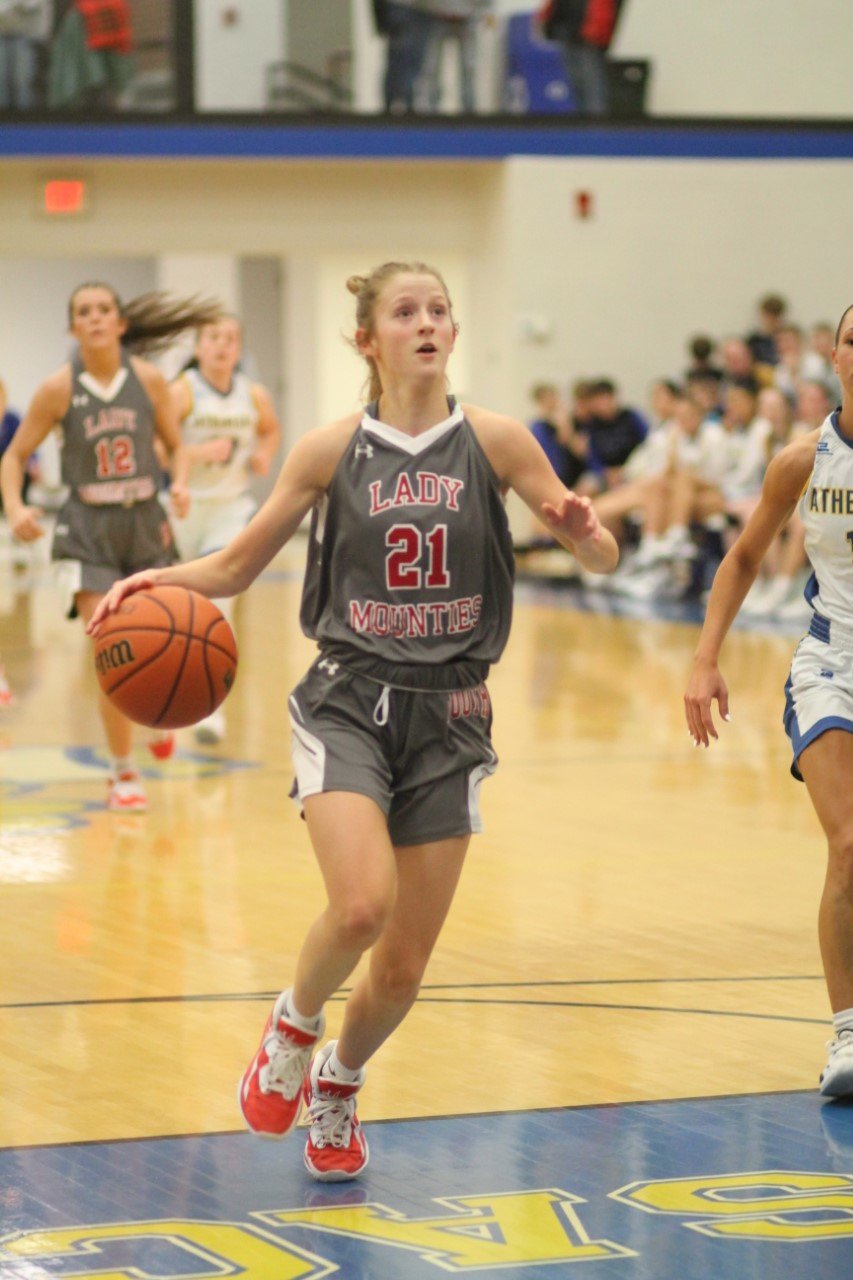 DeLorean Mason nearly had a rare double-double as the junior guard scored 11 points and tallied nine steals in the win.
Lori Poteet/Journal Review 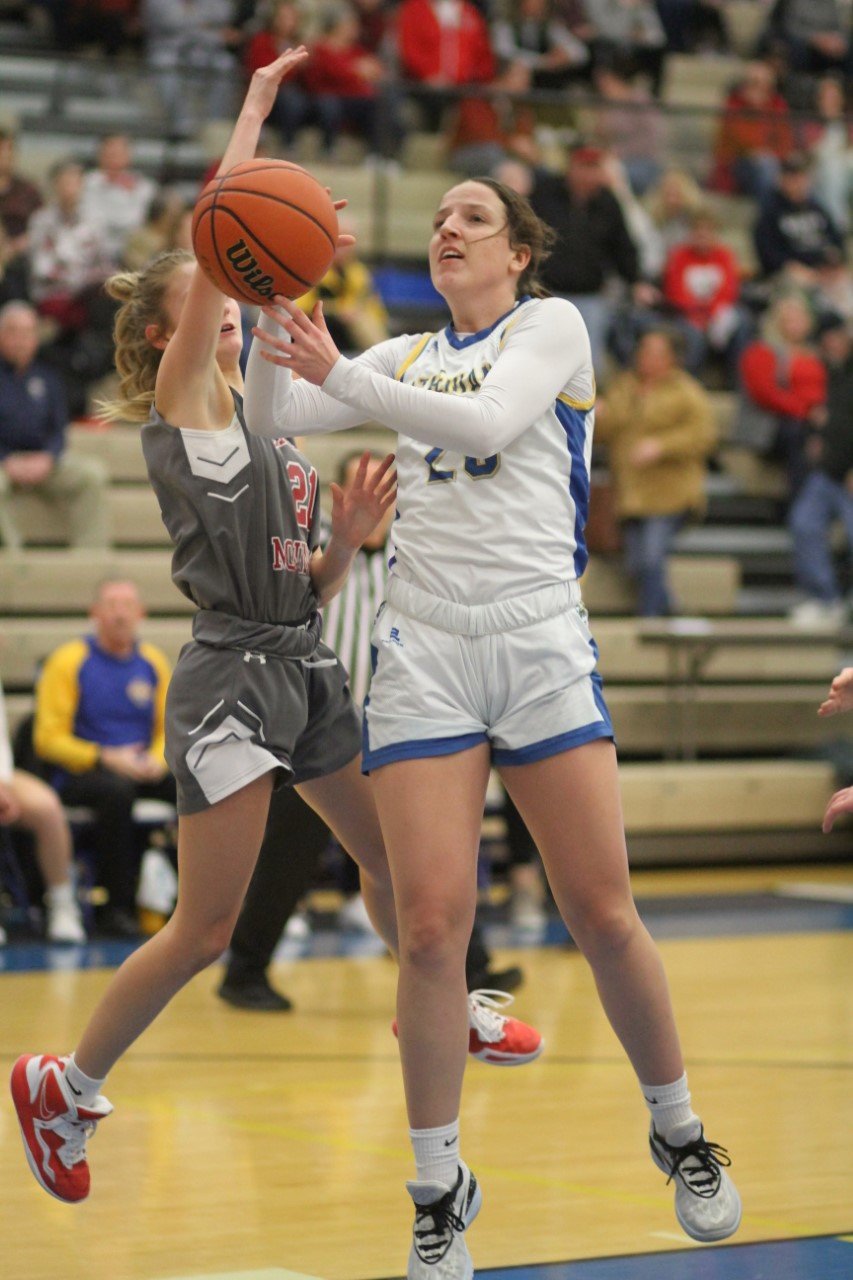 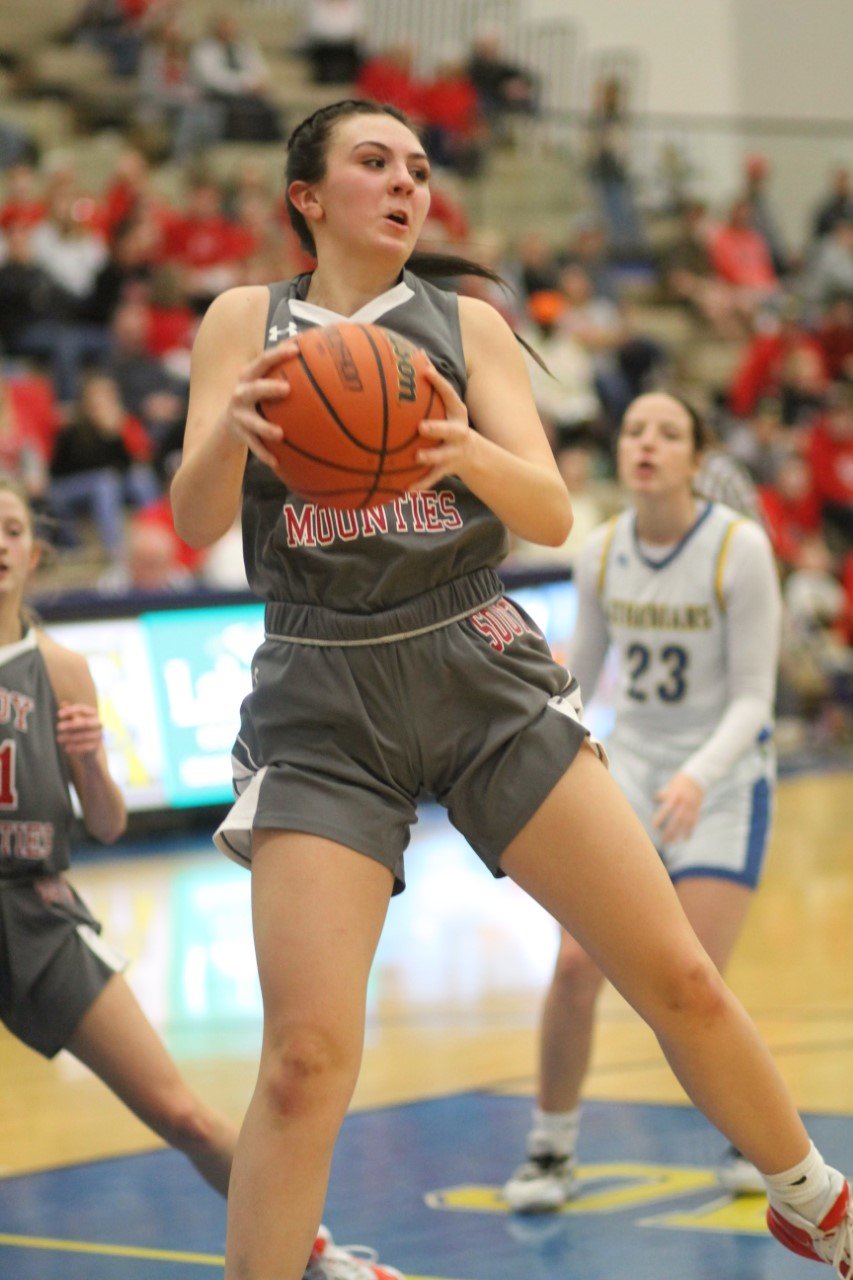 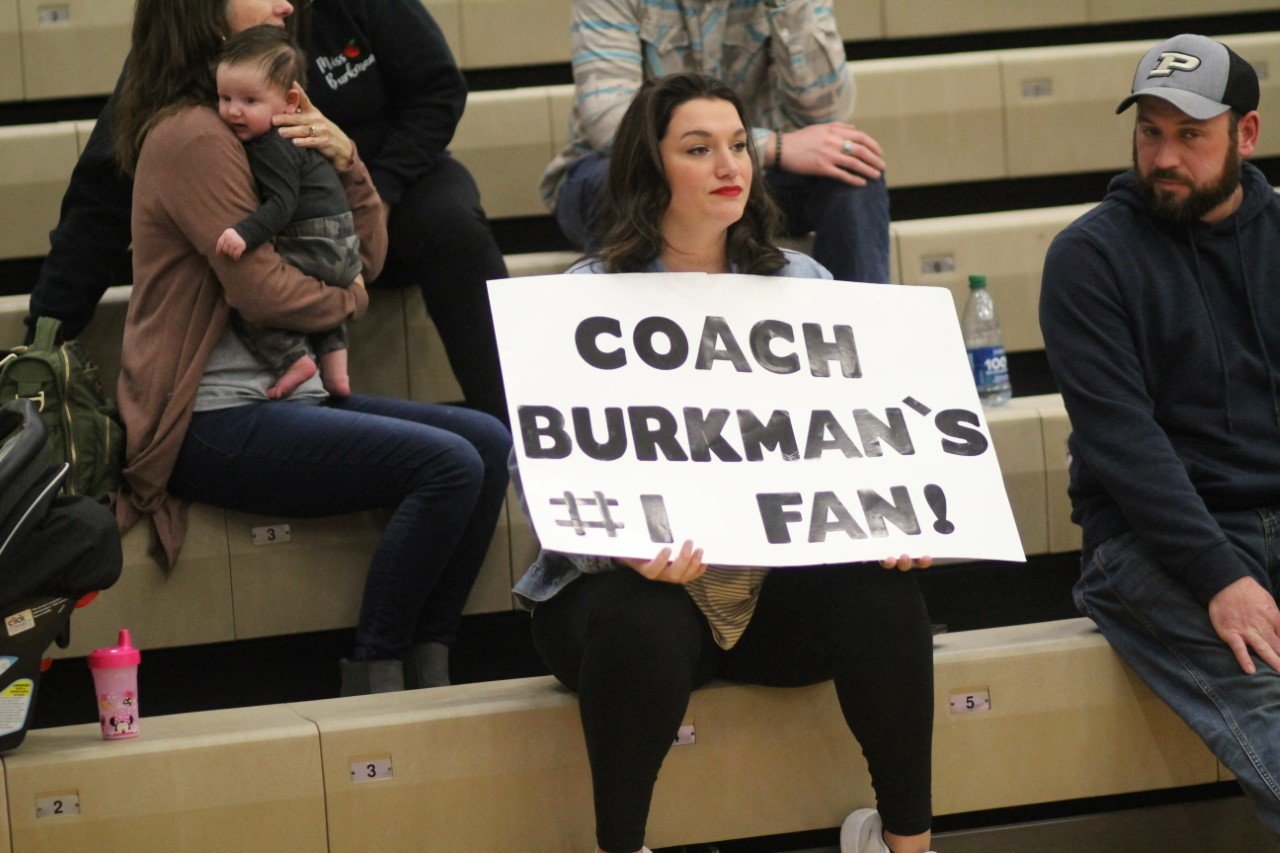 Southmont coach Dan Burkman had some special people in attendance on Saturday as his family made sure they let everyone know who they were cheering for.
Lori Poteet/Journal Review
Posted Sunday, January 22, 2023 1:34 pm
Southmont 66, Crawfordsville 34

It sometimes takes the being on a big stage for a team to shine the brightest. That was the case for Southmont girls basketball on Saturday when the Mounties took on county rival Crawfordsville with the winner taking home the county title. From the opening tip the visiting Mounties were determined to capture what they believe was theirs and when all was said and done South turned in a season-best performance with a dominating 66-34 win over their county rival as they were crowned county champions.

The 66 points for South is a season high as they were leading 29-17 at halftime, Crawfordsville was able to cut the lead to 31-25 early in the third quarter. From then on it was all Mounties as their defense forced 34 Crawfordsville turnovers and that in turn led to plenty of transition lay ups.

“I told them that this was by far the best we played offensively all season,” Southmont coach Dan Burkman said. “Even in our half-court we were executing and getting good shots and everything seemed to fall into place tonight. This is a kind of game that I know we’re capable of playing. For us to win county in the way that we did with this performance it made that championship feeling all the better.”

Southmont got all-around great performances from multiple players in the win as Chelsea Veatch scored a game-high 20 points. Chloe Jenkins turned in one of her best scoring outputs of the season adding 18 points and snagging 11 rebounds. DeLorean Mason added 11 points and stole nine Athenian passes while Cheyenne Shaw scored six, both Saylor Woods and Olivia Gray five, and Kenzie Douglas one.

“I can’t say enough about the play of Chelsea and how vital she is for us,” Burkman said of his senior guard. “We need her to play like this every night because when she plays like that it brings everyone else together. She was determined to go out and play well and that’s exactly what she did. Chloe broke out of her slump that she’s been in, so I was happy for both of those girls.”
The Mounties for the game shot 25-58 (43%) from the field while going just 10-21 (47%) from the foul line. They grabbed 48 total rebounds and turned the ball over 23 times. Crawfordsville shot 12-38 (32%) overall and just 3-10 (30%) from the charity stripe. They grabbed 32 rebounds and as previously mentioned turned it over 34 times.

The Athenians were led in scoring by both Taylor Abston and Elyse Widmer who ended with 10. Both Molly Pierce and Madi Hedrick scored five while both Riley Gardner and Abby Cox rounded out the scoring with two.

Crawfordsville coach Tyler Smith felt like after the game that his team is better than what they showed on the court.

“It’s not how we expected it to go because we thought it’d be a battle for a full 32 minutes,” he said. “We had one good stretch when we were able to cut it to six. The shocking part to me was that we practiced so much on beating their 1-3-1 defense. We did so well in practice and tonight we acted like we had never seen it before. This morning we felt completely 100% ready for it and that’s probably the most disappointing thing.”

On the night Crawfordsville celebrated its two seniors in Widmer and Abby Cox. Afterwards Smith thanked both of them for their contributions and dedication to the CHS program.

“I can’t say enough about both of them,” he said. “They’re amazing representatives of the program and great student athletes. We’ve appreciate all of they have done and wish them the best in the future. Even in the loss you saw the heart and desire that both of them continued to play with.”

With the loss Crawfordsville falls to 5-15 (1-5 SAC). They conclude their season with a pair of games this week both on the road. Tuesday they travel to North Vermillion and then conclude the regular season on Friday with trip to battle SAC rival Frankfort.

The Mounties with the win get over the .500 mark for the first time this season since the opening win of the year as they now sit at 10-9 (3-3 SAC). They have a busy week with three games, the first being on Tuesday when they host Covington. Wednesday will be senior night when the Mounties host Sheridan. Friday they’ll conclude their season on the road against Lebanon.

“It’s a pretty rough week ahead of us,” Burkman said of the three game week.” Basically we only will have Monday as a practice day but we hope to have this week be a successful one.”