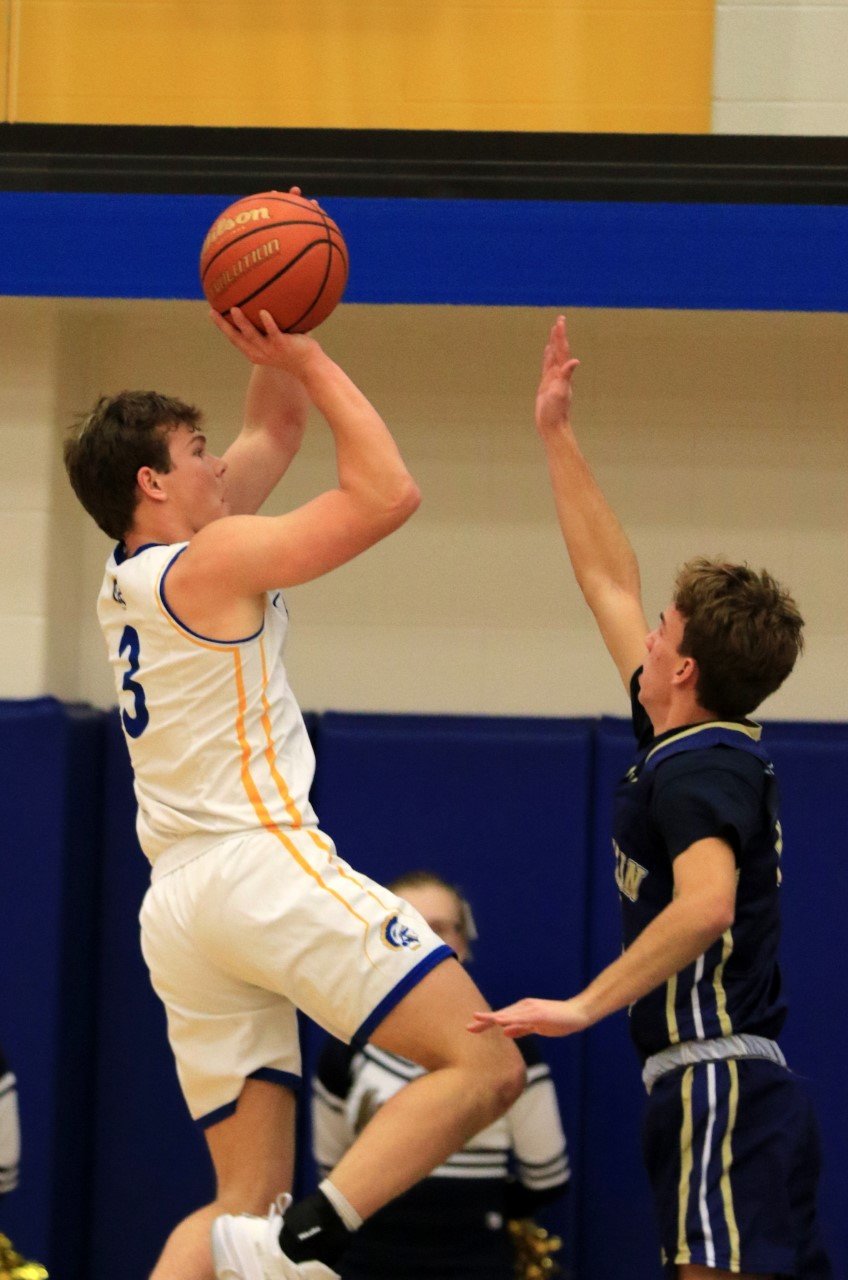 In a battle of two area teams on Friday, Crawfordsville boys basketball entertained the No. 7 ranked Fountain Central Mustangs. FC came into the matchup with a 10-3 as they’re off to the best start in nearly a decade while CHS came in at 5-6. On the night of their homecoming, Crawfordsville got out to 7-0 lead and led 10-3 after a quarter, however the battle tested Mustangs used a strong second half to secure a 42-34 win over CHS.

In the first 16 minutes of the game, Crawfordsville controlled the pace and tempo as the score read 15-11 Athenians entering halftime. A 9-0 Mustang run late in third gave FC their first lead at 20-18. Fast forward to late in the fourth where FC is holding a 33-27 lead, Cville spurts off five straight to make it a one point game at 33-32 with 2:09 left. The Mustangs were able to ice the game late at the foul line and hold off the gritty Athenians for the victory.

“This game wasn’t played at the pace that we wanted to play, but our guys still found a way to win,” Mustang coach Greg Dean said. “Coach Pierce had a fantastic game plan and give Crawfordsville a ton of credit for executing what he wanted them to do. We were patient and disciplined while we adjusted to the style of play and were able to get it done.”

While FC’s boasts the dynamic duo of 6’10 senior Mason Larkin and a lightning rod scorer in Will Harmon, the player that carried the bulk of the scoring for FC was junior Koby Wolf who scored a game-high 15 points including a perfect 4-4 from three. Dean praised the play of Wolf who has flown under the radar as of late, but shined when his number was called.

“He’s a kid that we knew early on last year had this ability to shoot it,” Dean said. “Shooters sometimes fall into a little bit of slump and you just have to shoot your way out of it and tonight was one of those nights for him. Drilling four threes along with playing great defense on the perimeter on the other hand, his play was nothing but huge for us.”

Along with Wolf’s 15, Harmon added 10 for the Mustangs. Both Larkin and Owen Acton scored five, with Isaac Gayler adding four and Luke Foxworthy three.

Cville was led in scoring by Cale Coursey’s 12 points (nine in the first quarter). Tyson Fuller chipped in nine, Ethan McLemore six, Alec Saidian four, and Drake Burris three. What plagued CHS in the loss was going just 5-33 (15%) from two with many shots just falling short right at the basket.

“We played and executed our game plan to an absolute tee tonight, but just couldn’t hit shots,” Crawfordsville coach David Pierce said. “They normally hit them and we got the right guys open that we wanted but the ball just didn’t go in tonight. Give FC a ton of credit for just plugging away and Koby for having 15 for them. Coach Dean does a great job with them so we felt like we had to give them something they weren’t used to. We held Larkin and Harmon in check and that’s what we wanted to do. I’m still proud of our guys for executing, just have to hit more shots.”

While it was a home game for CHS, the Fountain Central faithful made plenty of noise the entire evening and even formed a victory tunnel for FC as they entered the locker room after the win. That didn’t go unnoticed from Dean.

Crawfordsville with the loss falls to 5-7 on the season and now shifts its focus to a big-time county and conference game Saturday night against Southmont at home. The battle between the Mounties and Athenians will be for county bragging rights with the winner capturing the county title.

“Two weeks ago we held them to 32 and we know it’ll be another tough one,” Pierce said. “Both teams will make adjustments and hopefully we’re ready to go for tomorrow.”

Fountain Central with the win continues their impressive season as they improve to 11-3. FC hosts Clinton Prairie on Saturday and Dean knows that every team will be looking to give FC its best shot.

“We’ve had tons of emotional wins already and this was certainly another one of those,” Dean said. ”It’s going to feel great to finally go home and play again in front of our fans. I know coach Peckinpaugh will have his guys ready with that zone that they love to play so we have to be ready too.”