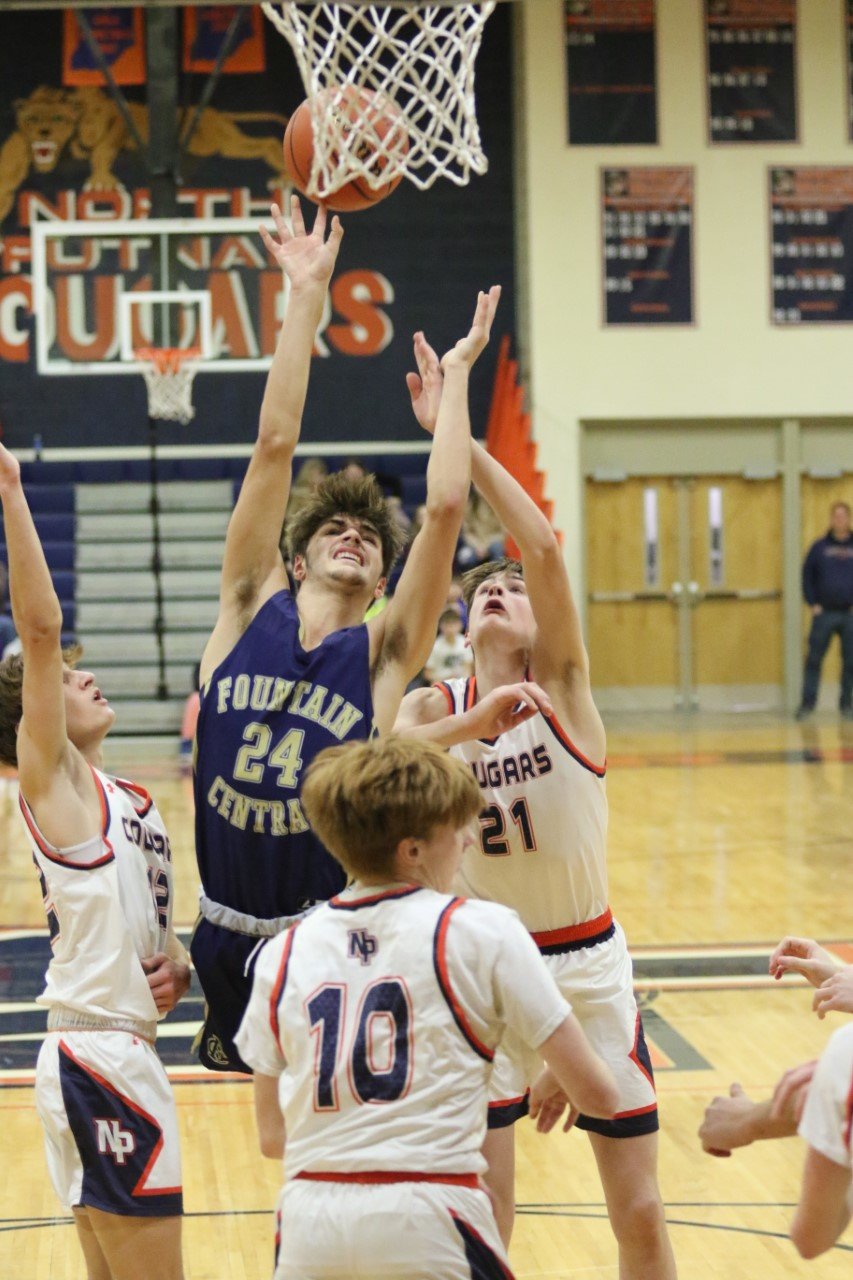 Trent Scott for the Journal Review

BAINBRIDGE – A 10-day break from the end of the 2022 portion of the boys’ basketball schedule ended with Fountain Central traveling to North Putnam Saturday night.

After a solid start, the Mustangs found themselves trailing after both the second and third quarters, inching in front as the fourth quarter went on, only to be dragged to overtime and, once there, could not convert enough possessions down the stretch, falling to the Cougars 56-54.

“We knew coming in that it was going to be a tough battle,” Fountain Central head coach Greg Dean said. “(North Putnam) is a team that’s getting better all the time and is a tough matchup for us because they have good guards that can play.

“They gave us exactly what we thought they would and we didn’t take advantage of enough opportunities. We kept battling, got into some foul trouble that hurt us and they hit shots when they needed to.”

After North Putnam (5-8) scored two of the first three baskets, Will Harmon gave the Mustangs the lead with a three off a steal, followed by a trio of putback baskets from Mason Larkin, Koby Wolf and Isaac Gayler for an 11-6 lead.

The Cougars got a three-point play from Nolan Hackleman on a putback basket and a late three from Brady Barber that kept the game close as Fountain Central led 15-14 after a quarter of play.

It would be the Mustangs’ last lead until the second half as Barber’s three was the kickstart of a 9-0 North Putnam run as Hackleman scored twice around a Barber basket to make it 20-15.

Luke Foxworthy hit a three but another quick six-point burst from the hosts made it 26-18, the largest lead of the night for either side.

Fountain Central closed the half with an 8-2 run, as Brandon Howell scored twice along with Larkin and Harmon chipping in a bucket each around two Isaac Pickel free throws, leaving the hosts with a 28-26 lead at the break.

Kaden Helderman opened the second half with a three and a basket off a steal to push the lead back out to seven at 33-26 though the Mustangs got all five points back after Foxworthy hit a free throw, Harmon threw down a dunk off a steal and Gayler hit from close range to make it 33-31.

The Cougars kept the lead afloat until Harmon hit a three and Gayler scored off an inbounds play as the Mustangs took a brief 40-39 lead until Brayden Monnett closed the quarter with a three to give the hosts back the advantage at 42-40.

“We started trapping and zoning a bit and got what we wanted out of that,” Dean said about moving to a 1-3-1 trap defense in the second half. “We got a lot of early shot threes but didn’t always do a good job of getting the rebound and when you give teams second chances, they’re going to take advantage of it. We have to figure out how to rebound better out of that zone trap and we have to be stronger with the bal. There were times (North Putnam) was more physical than us and that shouldn’t happen; when you’re bigger and stronger than another team, you have to make that count.”

Gayler tied the game at 42-42 top start the fourth quarter with Jaylen Windmiller replying inside and Foxworthy hitting 1-of-2 at the line in the opening two minutes.

From there, both teams had a gentleman’s agreement to slow the game to a crawl as possessions lengthened yet no scoring came with it.

Foxworthy would convert a three-point play with two minutes left with neither side able to make a move until Larkin was fouled with 19 seconds left, hitting 1-of-2 at the line.

North Putnam opted for the tie and with five seconds remaining, Helderman nailed a three from the top of the arc to send the game to overtime.

Hackleman hit 1-of-2 free throws twice to start the extra session with Harmon hitting two at the stripe to tie the game at 49-49.

Monnett hit a three that was answered in kind by Larkin but his participation, as well as Owen Acton’s, was cut short as both fouled out.

“Those fouls put people on the line,” Dean said about losing both post players. “Not that anything was intentional but you don’t want to put other teams on the line. We lost two key cogs that we want down the stretch and it took its toll on us a bit.”

Hackleman again hit 1-of-2 at the line before Isaac Hehmann scored his only basket of the night to give Fountain Central a 54-53 lead with a minute to go.

In the critical moment, North Putnam made its biggest effort play of the night, getting four looks at the basket before Hackleman drew a foul and sank both foul shots for a 55-54 lead.

Hehmann was fouled with five seconds left but missed both free throws and Helderman was sent to the line in the ensuing scramble for the rebound, adding the first free throw with the second going wide but with no time for the Mustangs to get a shot away as the Cougars walked away with the overtime win.