No. 2 Cardinals down Little Giants 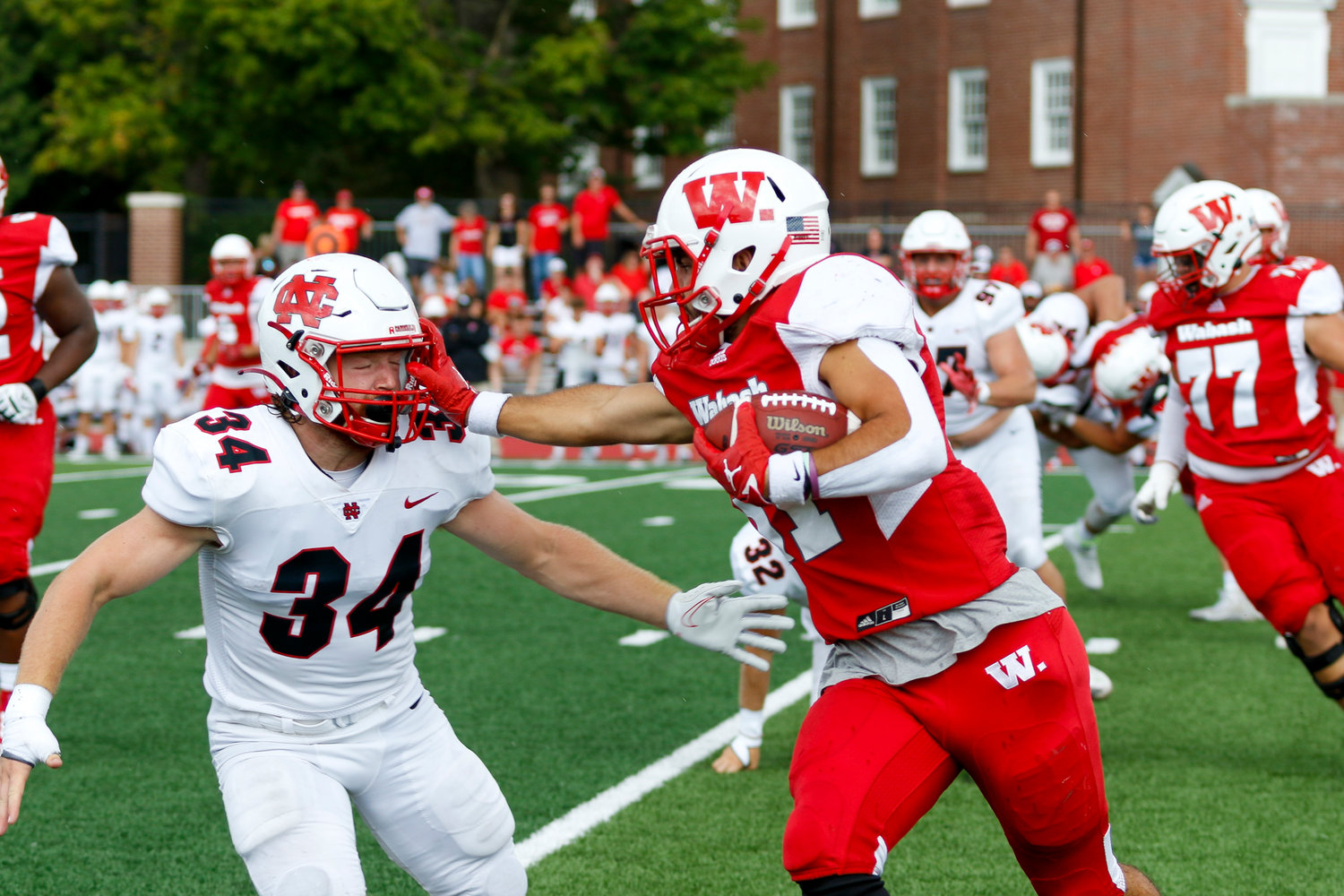 Donavon Snyder had one of the two touchdowns for the Little Giants in their 56-12 loss agains the No. 2 ranked North Central Cardinals on Saturday.
Photo Courtesy of Wabash College Athletics
Posted Sunday, September 11, 2022 12:18 pm
North Central 56, Wabash 12

The scoreboard at Little Giant Stadium at the end of the game between the Little Giants and Divison III No. 2 ranked North Central College read 56-12 in favor of the visitors. However, as bad as the score was, you could not find a Wabash coach or player who did not have a positive take on the experience of playing the defending Div. III National Champions.

The game was added to the Little Giant schedule after former North Coast Athletic Conference member Allegheny University dropped out of the conference. Wabash had numerous teams wanting to play the Little Giants but Coach Don Morel said he did not want an automatic win. He wanted a team that would be a challenge. Indeed, that is what the Little Giants had Saturday.

“We could have added a couple of teams we would have won 50 to nothing today,” Morel said. “But, I think playing a team like North Central is better for us down the road. This was a good learning experience. I still think playing North Central was the right thing to do for our program.”

It did not take the Cardinals long to establish themselves. North Central scored three touchdowns in the opening period while holding the Little Giants to no first downs.

Morel said the start was not what he expected.

“I was disappointed how the game started,” Morel said. “This game against these guys, you are playing behind when you take the field. They have lost three games the last four years and have won a national championship.”

After surrendering another Cardinal score, the Little Giants finally started moving the ball. In fact, they scored their two touchdown to make the score 28-12 at halftime. And, they were to receive the kickoff to start the final half.

Wabash came out and moved the ball down to the Cardinal 29 before turning the ball over on downs.

Morel said that moment was just one example of how close his team was to playing a better game.

“I am not saying we would beat North Central today, but I know if we could finish our drives, it would have been a lot better game. I do not feel they are 56-12 better than us.”

Wabash quarterback Liam Thompson echoed his coach after the game. He too said the Little Giants will learn from the game.

“They are a good really good football team and we wanted to schedule them to see where we are,” Thompson said. “I felt like we had some bright spots on offense. We have a lot of take aways from this game. I am glad we scheduled them. We finished the game healthy and we will go back to work for Wooster next week.”

North Central rolled up 542 yards in the game and Wabash recorded 257 yards, most of them coming in the last three quarters.

Morel said his team will be ready for next week’s NCAC opener at Wooster College. Wooster has beaten the Little Giants two years in a row.

“We are going to be alright,” Morel said. “Next week is a big conference game and we want to play well.  Just like always at Wabash, we have three goals. We want to beat DePauw, win the conference and win a national championship. Right now we can still do all three.”