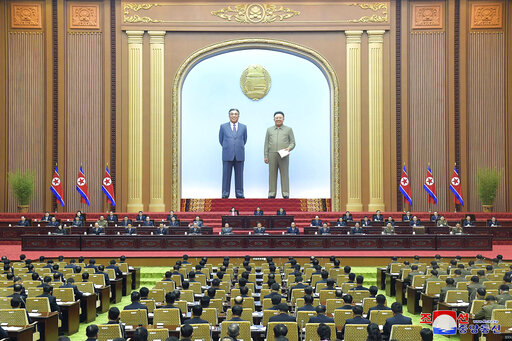 In this photo taken during Jan. 17-18, 2023 and provided by the North Korean government, North Korea’s parliament is held in Pyongyang, North Korea Saturday, Dec. 31, 2022. Independent journalists were not given access to cover the event depicted in this image distributed by the North Korean government. The content of this image is as provided and cannot be independently verified. Korean language watermark on image as provided by source reads: "KCNA" which is the abbreviation for Korean Central News Agency. (Korean Central News Agency/Korea News Service via AP)
Posted Wednesday, January 18, 2023 11:53 pm
By KIM TONG-HYUNG

SEOUL, South Korea (AP) — North Korea’s rubber-stamp parliament has passed a budget that sustains a high level of defense spending despite economic troubles as leader Kim Jong Un pushes for an aggressive expansion of his nuclear arsenal amid stalled diplomacy.

His statements during a major political conference in December underscored an intensifying nuclear standoff with the United States and its allies in Asia after he pushed North Korea’s weapons tests to a record pace in 2022.

The North fired more than 70 missiles last year, including multiple ICBM launches, and conducted a series of tests it described as simulated nuclear attacks on South Korean and U.S. targets.

Analysts say Kim’s aggressive arms expansion and escalatory nuclear doctrine are aimed at forcing the United States to accept the idea of North Korea as a nuclear power and to negotiate economic and security concessions from a position of strength.

KCNA said the assembly’s members projected overall state spending would increase by 1.7% this year but made no mention of the actual size of the budget.

The assembly’s members devoted 15.9% of this year’s national budget to defense spending, the same proportion as last year, to support efforts on “further bolstering up the war deterrence both in quality and quantity” and “defending the dignity and security of the country and the people,” KCNA said.

It’s difficult to gauge how much money North Korea would be spending on its military capabilities, considering the poor quality of the limited statistics it discloses.

According to the U.S. State Department’s 2021 World Military Expenditures and Arms Transfers report, North Korea possibly spent around $4 billion on defense in 2019, which would have amounted to 26% of its estimated gross domestic product, the highest proportion among 170 countries it reviewed.

KCNA's report on the assembly meetings hinted that North Korea was struggling to revive a moribund economy battered by mismanagement, U.S.-led sanctions over Kim’s nuclear ambitions, and COVID-19-related border closures.

They also discussed strengthening the surveillance activities of the Central Public Prosecutors Office to establish “revolutionary law-abiding spirit,” underscoring how Kim’s government continues to strengthen its control of its people in face of the deepening economic challenges.

Kim last appeared at the assembly in September, when he defiantly stated his country would never abandon the nuclear weapons he clearly sees as his strongest guarantee of survival.

The assembly’s members then passed legislation that authorized preemptive nuclear attacks in a broad range of scenarios where it may perceive its leadership as under threat, which included conventional clashes or conflicts that wouldn’t necessarily amount to war.

Alarmed by the growing North Korean nuclear threat, South Korea and Japan are scrambling to strengthen their defense postures in conjunction with their alliances with the United States.

The allies are planning to hold a tabletop exercise next month aimed at sharpening their response to where North Korea uses a nuclear weapon. Yoon’s government has also said it would call for Washington to deploy strategic military assets near the Korean Peninsula more frequently.

In December, Japan made a major break from its strictly self-defense-only postwar principle by adopting a new national security strategy that includes goals to acquire preemptive strike capabilities and cruise missiles in face of growing threats from North Korea, China and Russia.

Lots of sound and fury on US debt, but not a crisis — yet

Brutality of Russia's Wagner gives it lead in Ukraine war