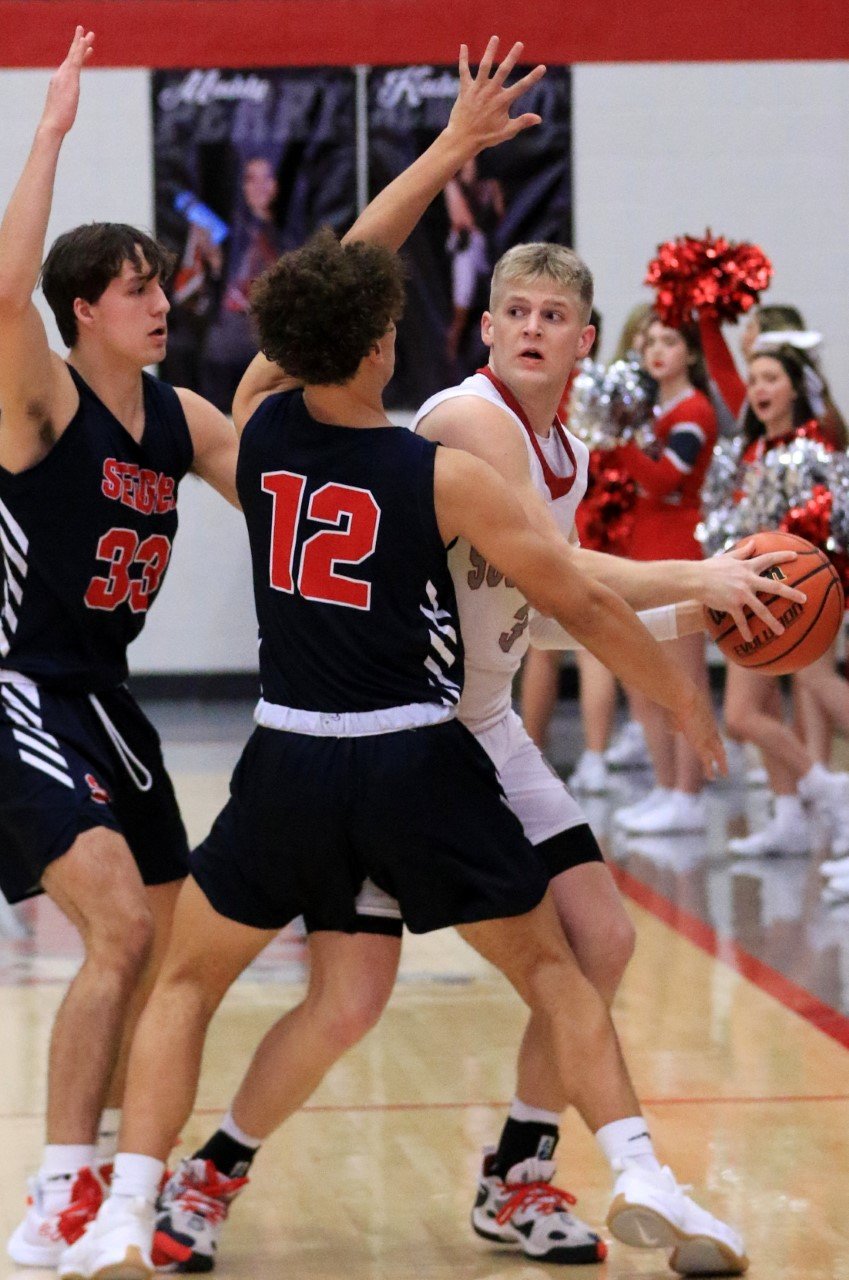 Southmont's Carson Chadd gets double-teamed by Seeger as he drew the main focus of the Patriots.
Susan Ehrlich/Journal Review 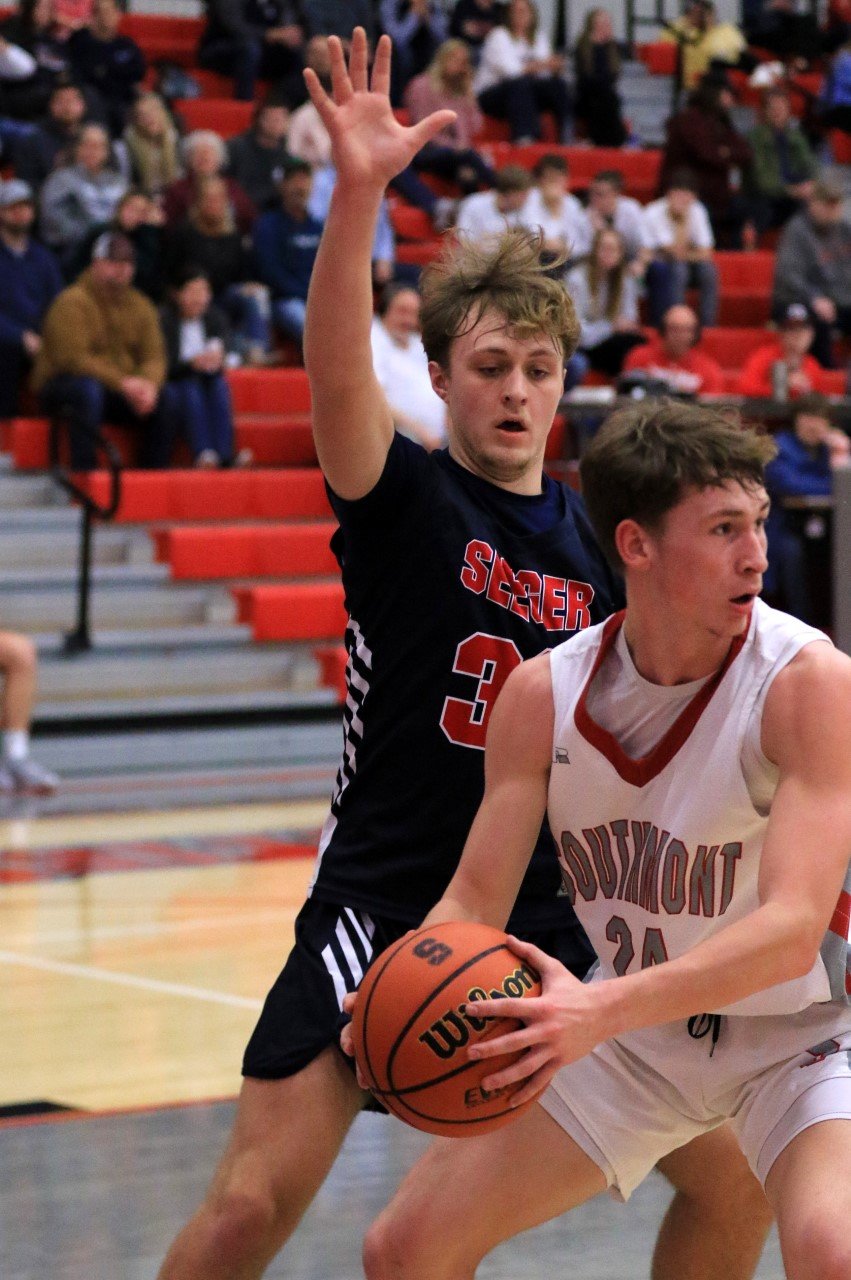 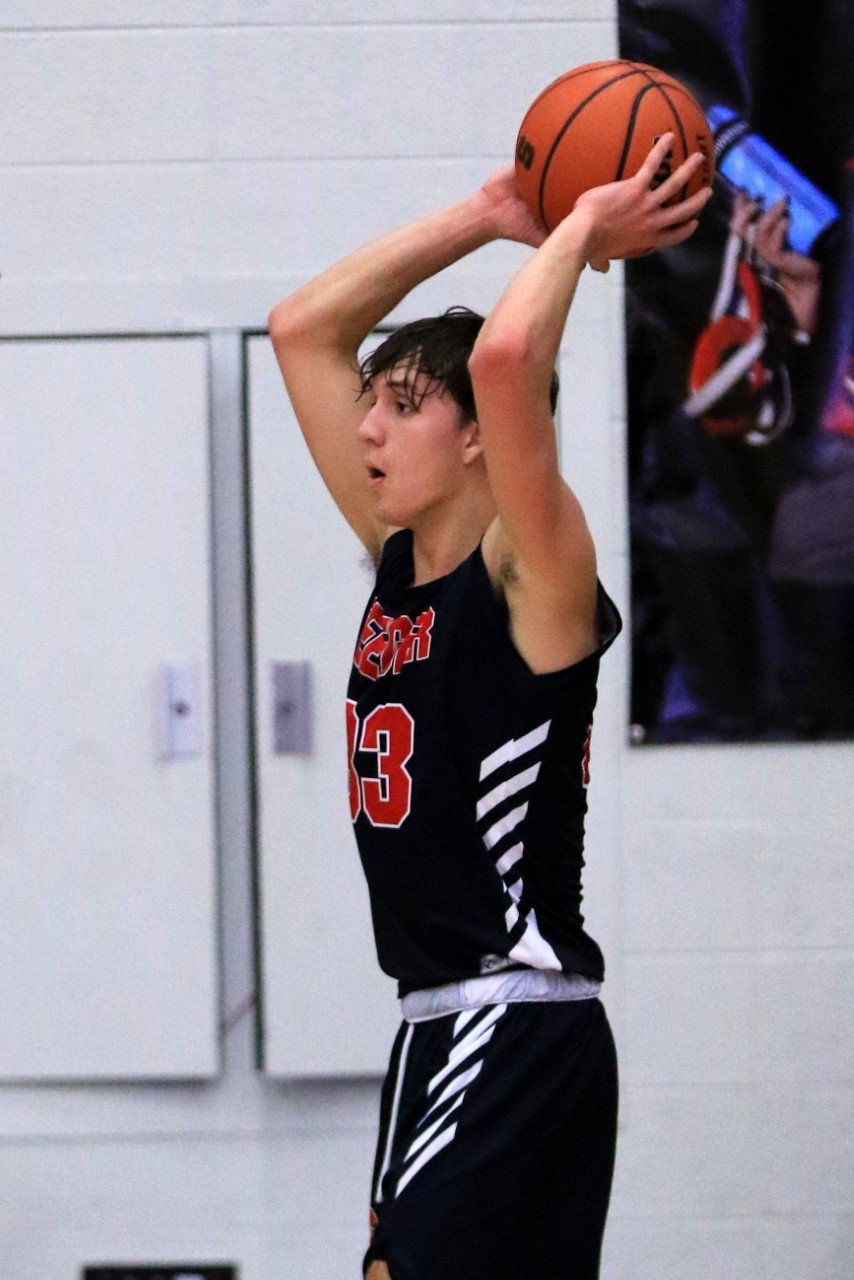 Congratulations to Seeger's Owen Snedeker for eclipsing the 1,000 point mark in his career. Snedeker scored 24 points including the game-winning put-back as time expired to give the Patriots a 52-50 win.
Susan Ehrlich/Journal Review
Posted Saturday, January 14, 2023 12:03 am
Seeger 52, Southmont 50

On the night that Seeger senior Owen Snedeker scored his 1,000th point of his career, it was only fitting that he would be involved in the late-game drama that unfolded on Friday. Southmont trailed Seeger 50-46 with 28.9 seconds left. Carson Chadd drilled a pair of free-throws to make it 50-48. Applying full-court pressure an errand Patriot pass ended right in the hands of a hustling Hayden Hess who laid it in to even the score at 50-50 with just seconds remaining. Seeger raced down the floor and got a shot off which didn’t go, but right there was Snedeker who scored on the put-back as time expired on the Mounties as Seeger escaped with a 52-50 win.

“Owen is a 1,000 point scorer for a reason and I watched a lot of their games on film. I thought tonight was the most relentless I’ve seen him all year,” Southmont coach Jake Turner said. “He took being guarded by Carson as a challenge and their team is just experienced and well-coached. I’m proud of the way we responded after a not so good start. Normally we’re a pretty good defensive team but tonight they were relentless and Snedeker just made one more play at the end.”

Seeger got out to a 26-11 lead mid-way through the second quarter, but a 10-2 Mountie run to end the half got them back in the game as they trailed 28-21. Coming out of the third South carried that momentum as they began the third on a 10-0 run to take a 31-28 lead. From there it was back and forth between the two great teams.

Snedeker led all scorers with 24 points in the win for the Patriots and Cam Laws also added 12. For the Mounties it was balanced scoring across the board as EJ Brewer and Trip Ward both had 11 to lead the way. Hess scored 10 in one of his best games of the season. Both Chadd and Kyler McCandless added eight. Carter Hubble made his season debut for the Mounties and scored two points as he was recovering from knee surgery.

“It felt like an old-school game tonight and once again we had guys step up left and right tonight,” Turner said. “Hayden and Kyler both stepped up then you throw in EJ who had a rough weekend last weekend, making plays. Carson gets most of the attention on the scouting report but at the end of the day we’re a team. For the first time all season we had everyone healthy as Carter returned for us and I was happy for him to get back out there. We win and lose as a team and at the end of the day I’m just proud of how we kept fighting.”

With the win the Patriots improve to 9-3 on the season. They return home on Saturday for a big-time WRC matchup as they host Fountain Central.

South with the loss fall s to 8-3 on the year. They will host Riverton Parke on Saturday night.