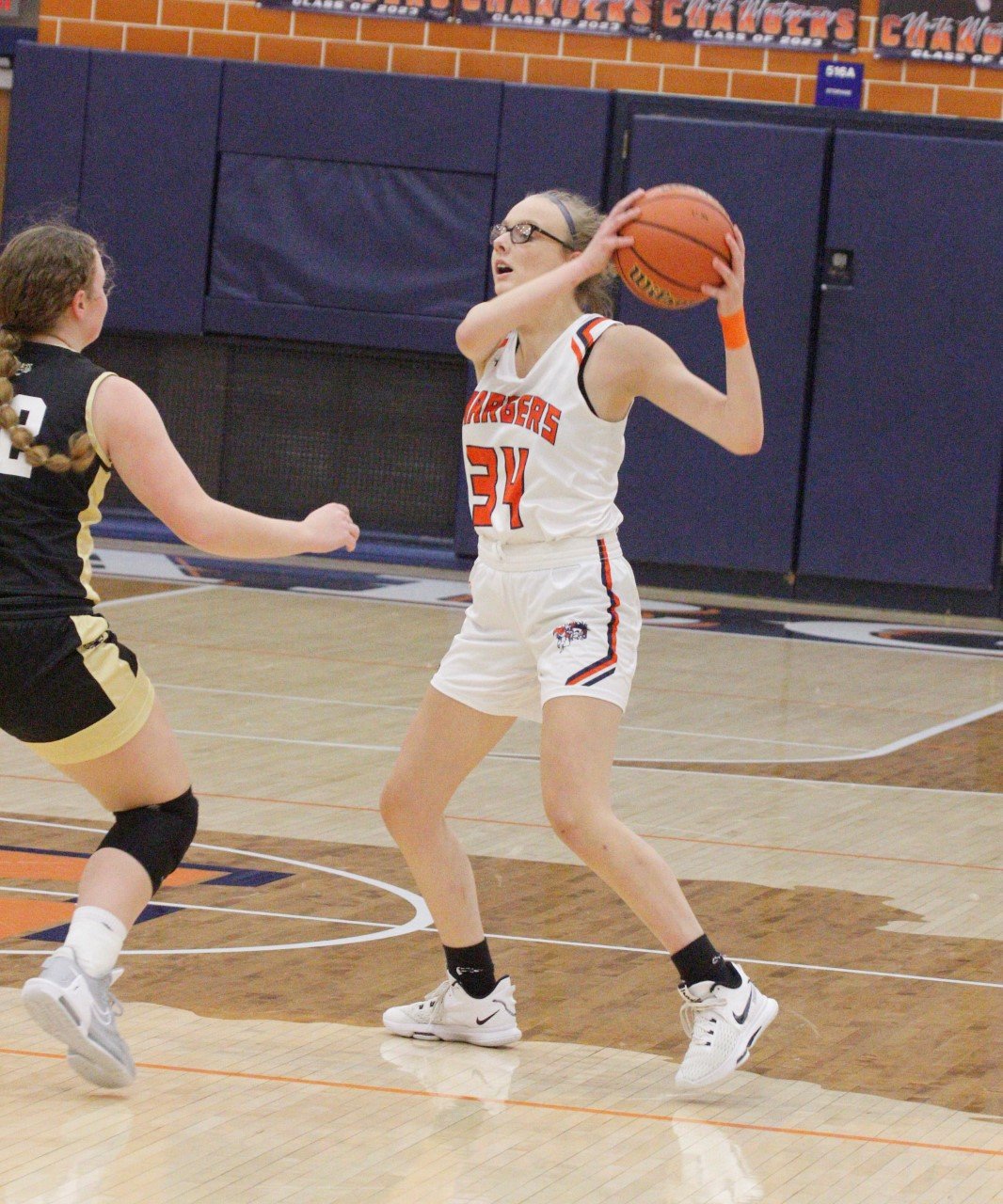 Madison Banta was one of three North Montgomery seniors that were honored on Friday night as Jadelyn Phillips, Maely Gaskin, and Banta all played their final home game of the Charger careers.
Will Willems for the Journal Review 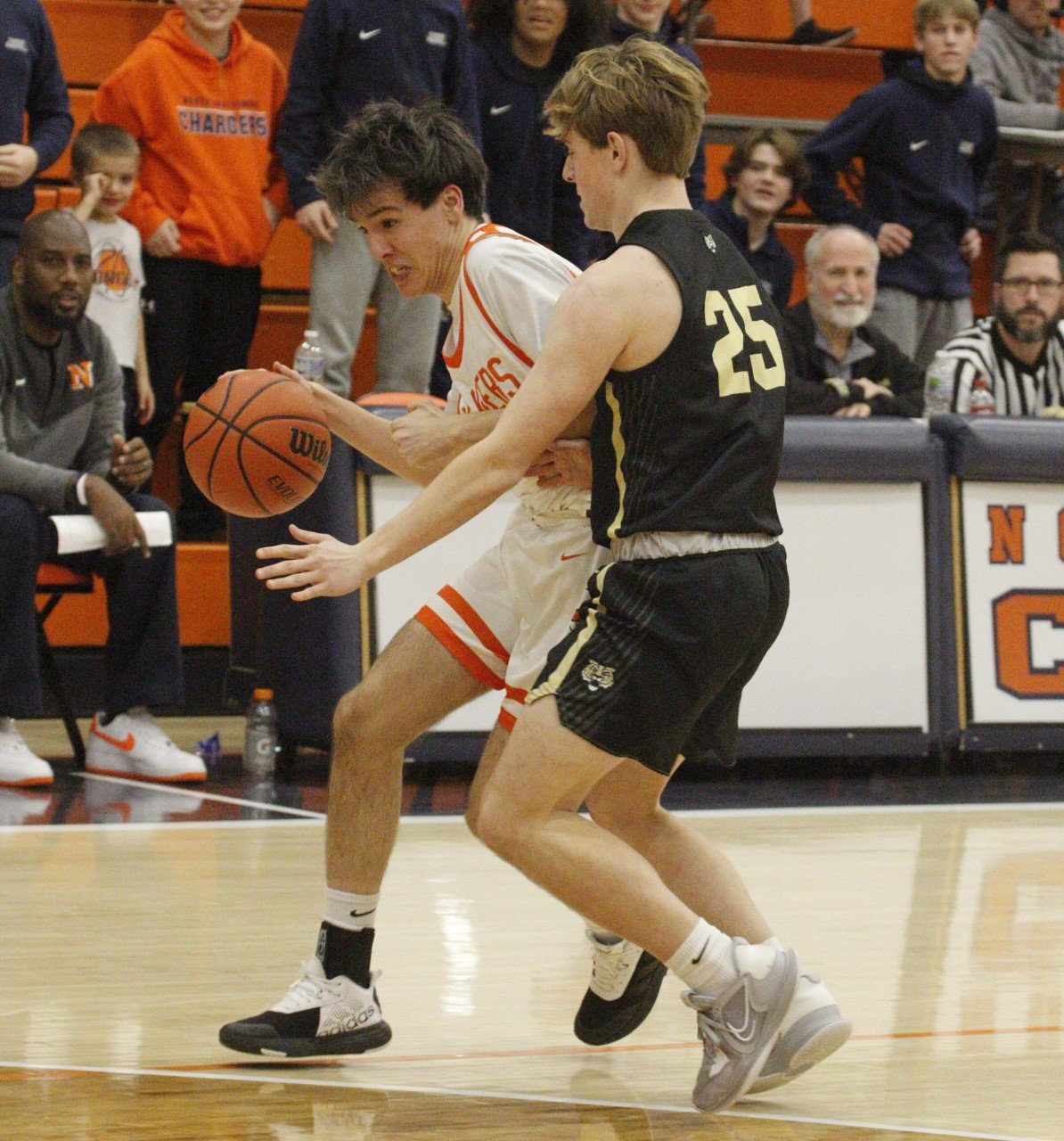 LINDEN - Coming off a tough loss to Lafayette Central Catholic on Tuesday night, the Lebanon girls basketball team wanted to make sure they got off to a quick start when they traveled to face North Montgomery on Friday night.

And in the first half, the Lady Tigers followed the game plan perfectly, building a 23-point lead and went on to beat the Chargers 48-21.

“They came out, played relaxed and stress free,” Lebanon head coach Candice Huckstep said. “We really wanted this one because we have really been honing in on getting second in the conference. Defensively, we were able to get into the passing lanes and that led to some easy baskets.”

The momentum carried into the second quarter, as Lebanon built the lead to 25-5 with 3:22 left in the half on a basket from Alexandria Barr.

But then the Chargers started to get stingy on defense, and over the next 16 minutes, the two teams played even, each scoring 16 points.

“The girls hung in there,” North Montgomery head coach Ryan Nuppnau said. “A lot of times we are out-matched physically, but we aren’t going to back down from a fight and will play hard. We dug ourselves a hole in the first quarter, but we pretty much played them even after that. The girls kept playing hard, and I am really proud of that.”

In the second half especially, the Chargers did a good job of limiting what the Tigers could do offensively.

Lebanon had just nine points over the first 13 minutes of the half.

“They called off the press, which helped,” Nuppnau said. “But really, we calmed down, we executed and ran our stuff. It’s frustrating because we came out and played scared like a deer in the headlights, but after a while they realized that we could play with them.”

Claire Boling and Riley Vanaman each had seven and Barr had six.

Piper Ramey led the Chargers with 12.

After the game, the Chargers honored their three seniors – Jaydelyn Phillips, Madison Banta and Maely Gaskin.

“They have had a long trek through middle school and high school,” Nuppnau said. “They weren’t always the most talented group, but they just love the game of basketball. They come out and give us everything they got and play hard. They are here because they love the game so much and we are going to miss them. They do a lot for us off the court as leaders and role models too. So having them as leaders, that’s something we are going to miss dearly.”

Lebanon is off until Friday when they conclude the season at home against Southmont.

Physical Tigers too much for Charger boys

Lebanon head coach Albert Hendrix has been emphasizing his team trying to stay locked in for a complete game all season long.

Friday night on the road at North Montgomery, the Tigers took a solid step in the right direction. The Tigers controlled the game from start to finish, and locked in a solid defense effort in a 57-32 victory over the Chargers to improve to 12-3 on the year.

“We are trying to play a solid 24-25 minutes right now,” Hendrix said. “I thought we had a great defensive effort for 24 minutes tonight. We had a couple of quarters where we held them to six each, and I was really proud of our kids for that.”

Lebanon came out shooting hot early, getting three 3-pointers from Jake Burns in the first quarter to take a 14-3 lead.

The Chargers hit five 3-pointers in the second quarter to stay within striking distance at 31-18 at the half, but Lebanon’s speed took over in the third.

“We competed well,” North Montgomery head coach Chad Arnold said. “We had some good looks and missed a couple lay-ups in the first half, and we were down 31-18. But overall, I felt like we competed well against a really good team.”

Leading 37-22, Lebanon closed the quarter on a 14-2 run, with guards Kaden Lark, Burns and Korbyn Sloggett getting to the rim and adding another dynamic to the Tigers’ offense.

North Montgomery turned it over a few times during the stretch, and struggled to get consistent offense going against Lebanon’s defense.

“We tried to slow the game down and they started jumping us,” Arnold said. “They did it in the first half, but they switched better in the second half. They started driving us and we couldn’t drive them – and that puts you in a bind. When they started to do that, we struggled.”

Burns led a balanced scoring effort with 13 points. Lark had 12, Landon Fouts had 10 and Korbyn Sloggett had nine.

North Montgomery has lost six straight and hits the road for match-ups with West Lafayette and Western Boone next week.

“We have to keep competing,” Arnold said. “Lebanon is very good, they have a chance to win their sectional and has players all over the floor. We have to compete like we did in the first half. We have to get better defensively on rotations, but if we keep competing, trying to rebound and be a little more physical, that will help us throughout the rest of the season.”