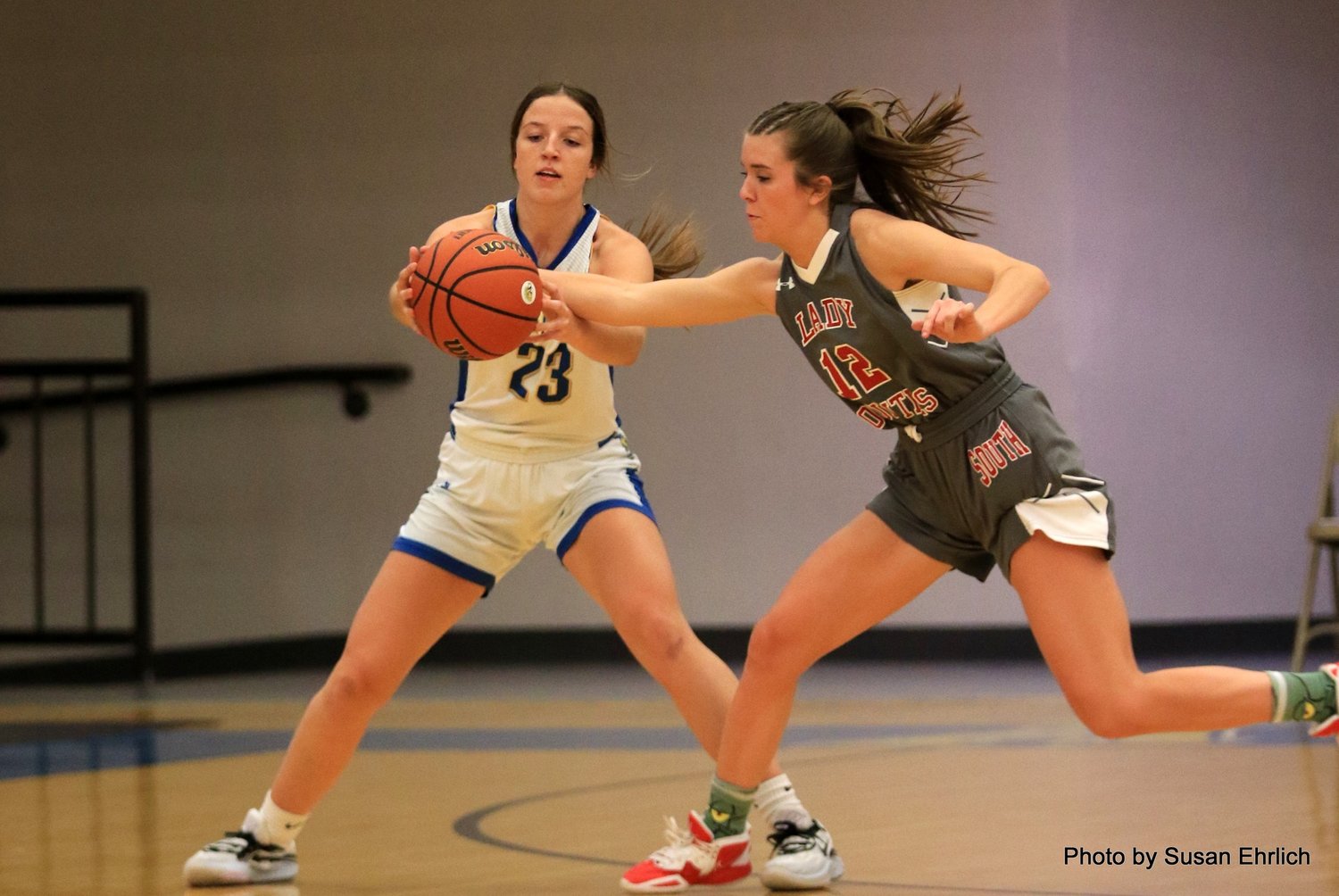 Chelsea Veatch had a career night for Southmont scoring a career high 20 points for the Mounties in their 39-18 win over Crawfordsville.
Susan Ehrlich for the Journal Review 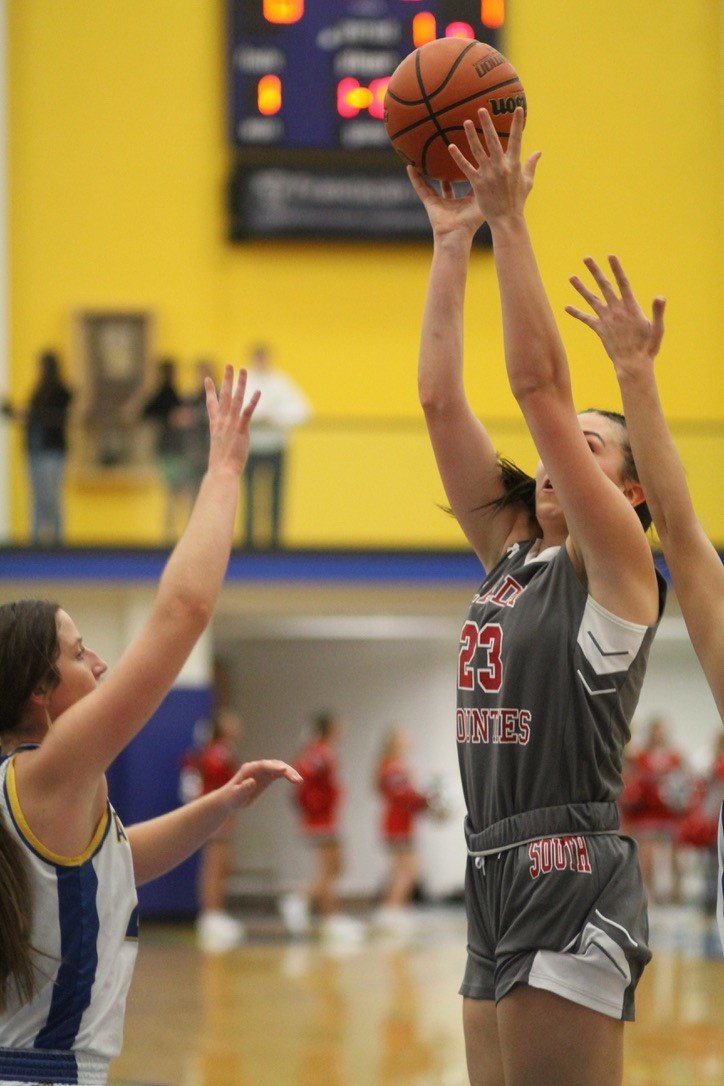 Chloe Jenkins crashed the boards and ended her night with 11.
Lori Poteet/Journal Review 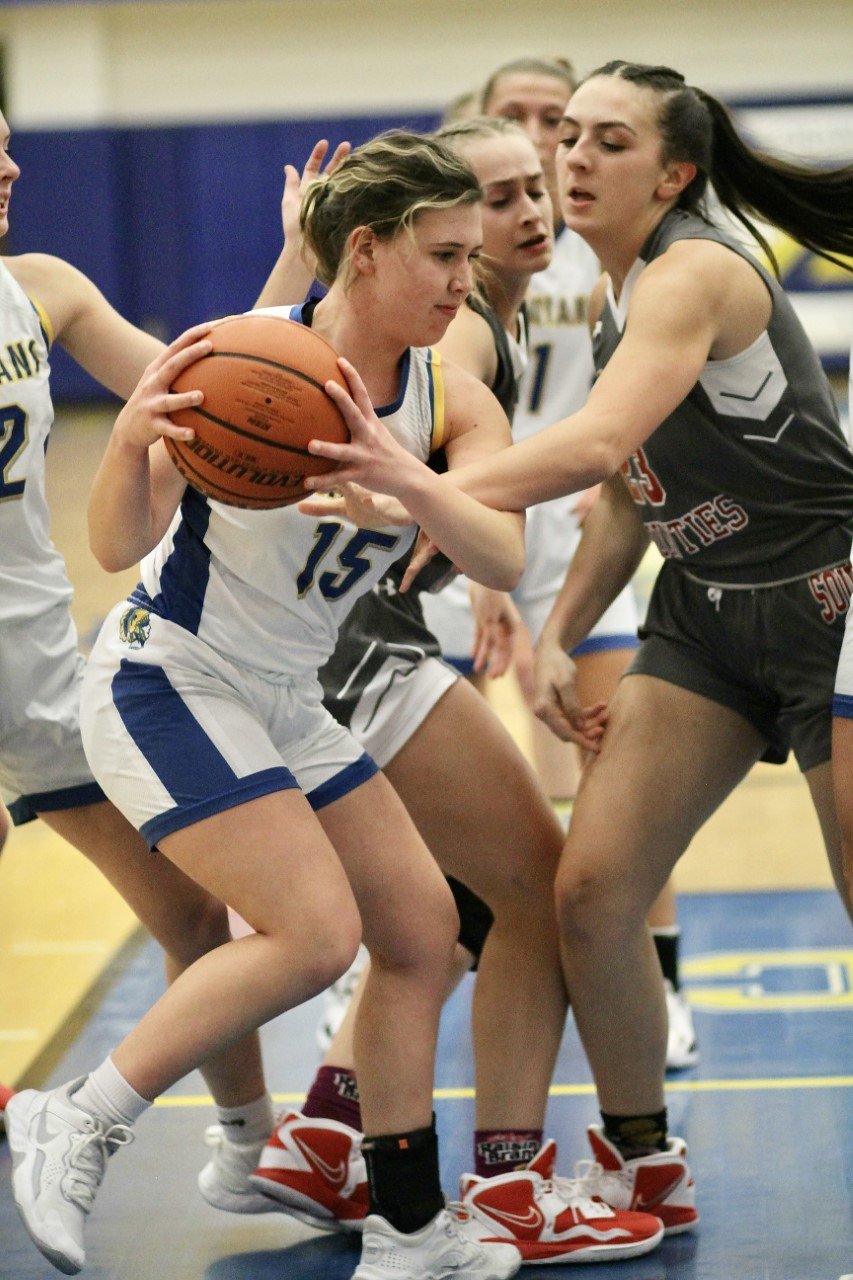 Chelsea Veatch was a member of the Southmont team that lost last year to Crawfordsville in the opening round of the Sugar Creek Classic. The now senior wasn’t going to let history repeat itself as the Southmont defeated county rival Crawfordsville 39-18 in the opening round of the 16th annual Sugar Creek Classic on Friday. Veatch was on fire all night long drilling four threes and ended the game with a career high 20 points to go along with seven rebounds.

“She definitely stepped up tonight when we needed her to,” Southmont coach Dan Burkman said. “I know she’s capable of doing that and we need her to be confident in herself. I trust her more than she trusts herself sometimes. DeLo (DeLorean Mason) was in foul trouble most of that first half and we needed someone to take the reigns.”

The score read 20-12 at halftime in favor of the Mounties then things broke open in a big way for South in the third quarter as they out-scored Crawfordsville 15-2 to take a commanding 35-14 lead as they cruised to the victory.

The Athenians made just five field-goals the entire night going just 5-36 from the field (14%) and committing 25 turnovers in the loss. A displeased Tyler Smith talked about that third quarter specifically after the loss.

“That third quarter was simply in-excusable in almost every aspect of the game,” he said. “We weren’t paying attention, executing our game plan, cutting to the basket, defending, it was just un-acceptable. It’s really unfortunate because we thought going into halftime it was anyone’s game because we missed some open looks. There’s a lot to work on to be ready for tomorrow.”

To go along with Veatch’s 20 point performance, South also got eight points from DeLorean Mason, six from Chloe Jenkins, three from Saylor Woods, and two from Cheyenne Shaw. Burkman came into the game against the Athenians loving how his team has been playing on defense. That love continued after holding their county rival to just 18 points.

“We gave up just 20 points in our last game before giving up 18 tonight,” he said. “I’ve said all season how I love how we’re playing on that side of the ball. Saylor Woods I thought came in tonight off the bench and gave us a lift that we needed. She hit a big three and played pretty aggressive defense. I usually don’t see her playing that way so that in my opinion was her best game of the year.”

Taylor Abston led the way for Crawfordsville with 11 points in the loss. Riley Gardner knocked down a three and both Celeste Moore and Madison Hedrick scored two. The Athenians fall to 1-4 on the season and will now get ready to play in the consolation game on Saturday night at 6 pm vs their other county rival North Montgomery. Smith knows the quick turnaround will be another test for his team as they look to get back in the win column.

“We don’t have time to feel sorry for ourselves,” he said. “I want them to get a little angry and upset with how they played so that they can use that as fuel and motivation for tomorrow. We’ll see what kind of resolve we have as a team. The third quarter will have to be much better but we’re looking forward to taking on North.”

The Mounties with the win improve to 3-3 on the year and will get to play for the Sugar Creek Classic championship tomorrow night when they take on Western Boone. Burkman noted how it’ll be two different styles of play but is looking forward to accomplishing what is an early season goal tomorrow night.

“WeBo is a very physical team,” he said. “It’s going to come down to their physical style versus our speed and tempo that we like to play with. I’m hoping we can throw them off with our speed because I feel like we’re a pretty fast team. They have two big physical girls that we’re going to have to keep off the boards.”

The championship game will begin 20 minutes after the conclusion of the consolation game. You can catch both games on WIMC Thunder 103.9 with Jared McMurry and Billy R.