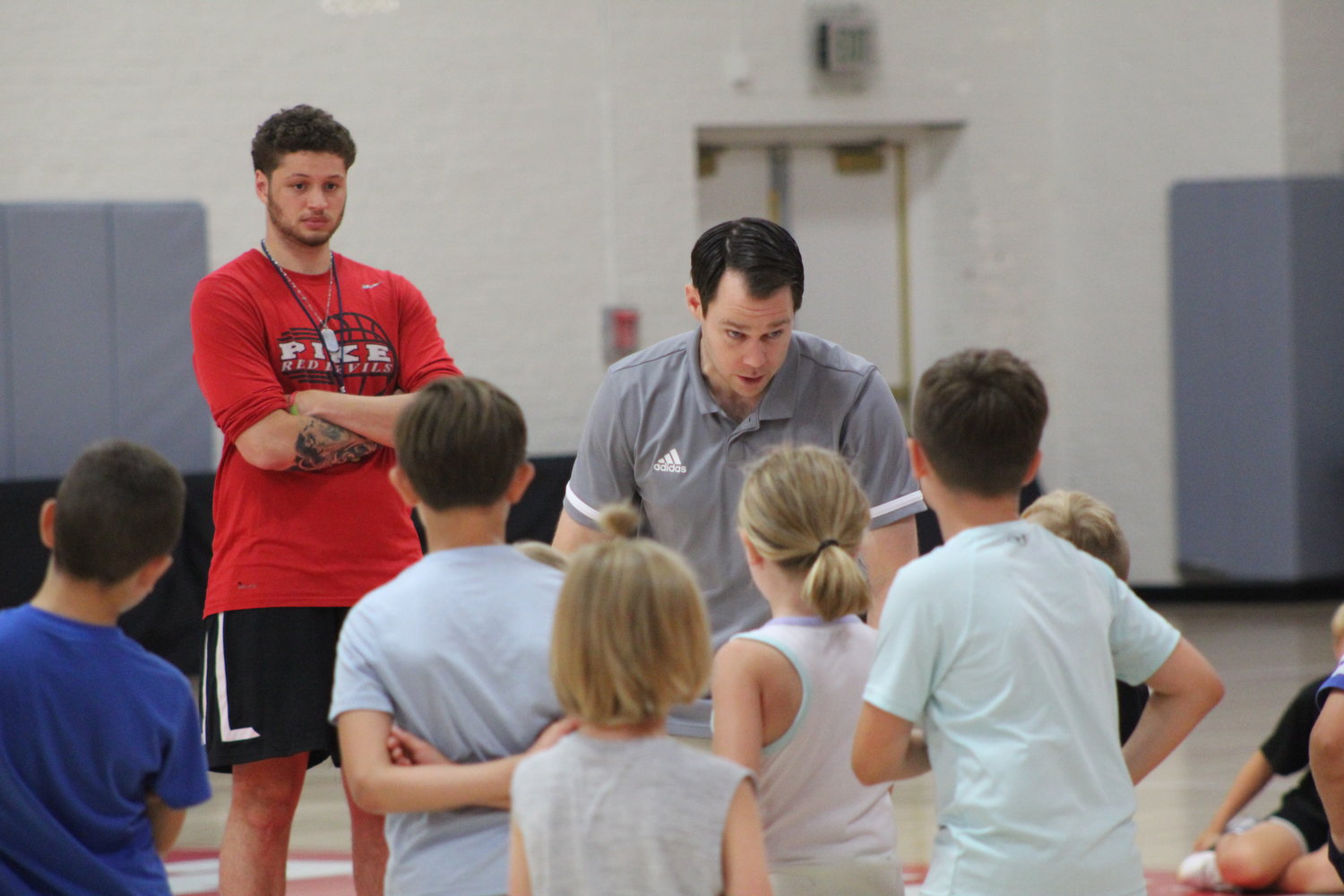 Wabash Basketball Assistant Coach Pat Sullivan instructs some of the campers during the skills camp hosted by the Little Giants. The camp has over 80 kids in attendance.
Codey Emerson/Journal Review 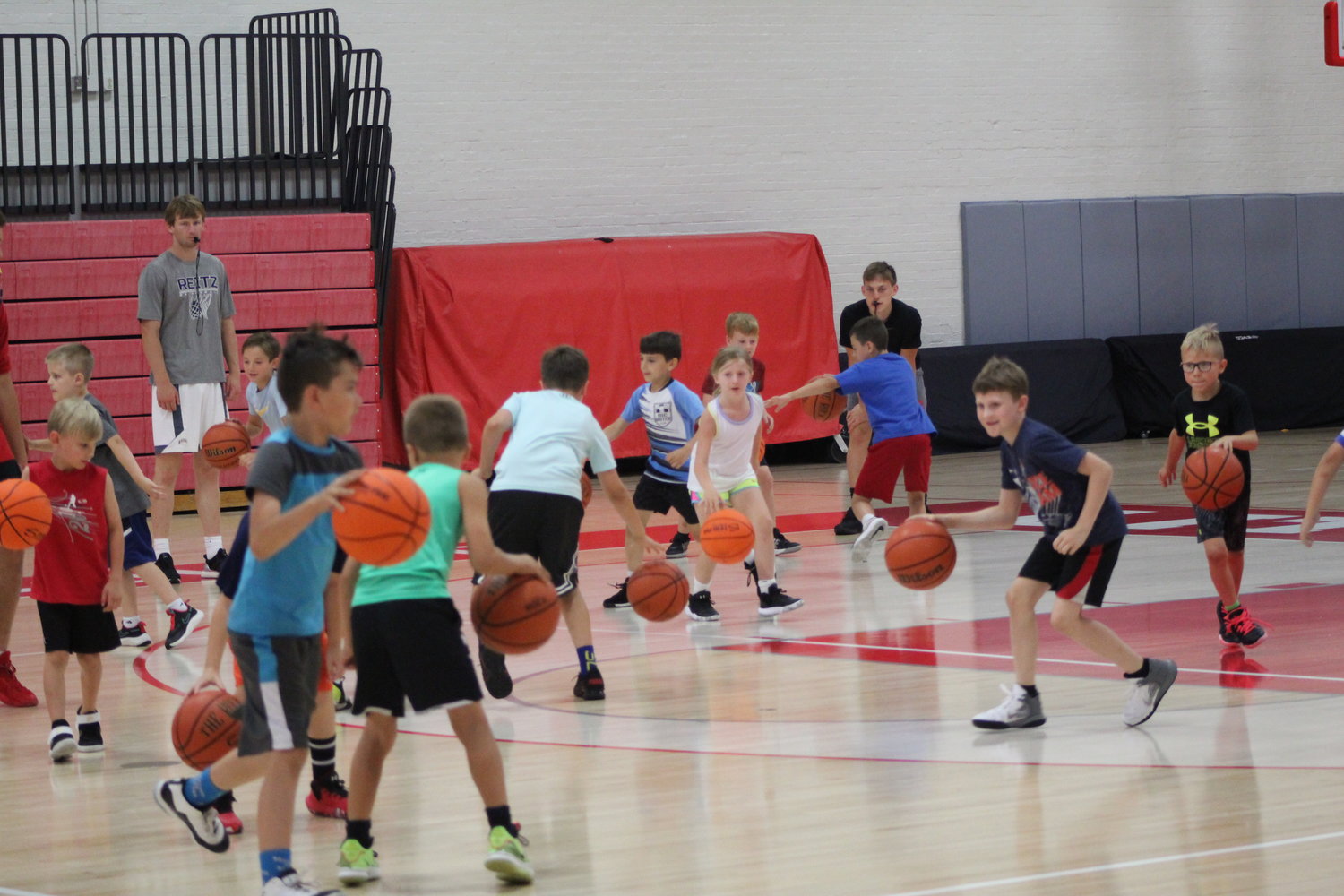 Wabash basketball this past season had a year that will go down in school history. A 24-game win streak and a trip to the NCAA Division III Final Four in Fort Wayne allowed the Little Giants showcase that they were one of the best D3 schools in the country. That historic season allowed the Little Giants to gain popularity especially with the next generation of hoopers.

After a few summers away due to the COVID-19 Pandemic, the Little Giants are in the midst of hosting their youth skills camp which is hosted by head coach Kyle Brumett which takes place at Chadwick Court. Along with the help of Brumett’s coaching staff and players, they have been the hosts to over 80 kids in grades 2-8. The camp got underway on Monday and is wrapping up tomorrow as kids are learning everything from the rules of the game to fundamentals and of course having a fun time doing so.

“This is just another way of getting our guys connected with the local communities,” Brumett said of the camps return. “It’s been a number of years since we’ve done it and we did have some concerns about getting the community back involved. I think the season that we had allowed the community to come watch us again and we were also able to get back out into the schools with our reading program that we do. It feels rewarding being able to do this again and it says something about the guys that we recruit and the kind of people they are.”

The camp while mainly focuses on hosting kids from the area schools, has seen it reach all the way down to Houston, TX as Brumett noted that there a couple of kids from the Houston area. Other areas and towns that have campers present include Rockville and Greencastle just to name a few. The majority however does represent Crawfordsville and Montgomery County.

With having campers that span a wide age and grade range, Brumett noted how he, his coaching staff, and players have to start with the basics. Assistant Coach Pat Sullivan hosts a coaches meeting every morning before the camp begins with the Wabash players who act as the campers ‘coaches’ for the day.

“Coach Sully reminds our guys that we have to really start by teaching these kids the rules of the game first,” Brumett said. “We take time to make sure they know what to do when you’re shooting a free-throw, to having both feet out of bounds after a made basket. Everyone of them is at a different level and different stage and I really enjoy that about this camp. Getting these younger to middle-school aged kids around our guys is what we as a program enjoy the most as well.”

Not only do the kids benefit from being around the Wabash players and staff, but it also goes the other way as the players like Ahmoni Jones, Vinny Bucilla, Sam Comer, and Edreece Redmond just to name a few get to develop their own skills with kids that can benefit them later in life.

“We had a alumn come in today to visit and he told me that he appreciates the kind of fathers, husbands, and employees that these guys become because of their time here at Wabash,” Brumett said. “I love getting to see our guys interact with these kids because it gives them a sense of what it’ll be like one day when they start their own families.”

Of the over 80 kids in attendance at the camp that will once again wrap up tomorrow, there just might be the next star to who will come and play for the Little Giants. The Wabash Basketball team continues to give back to the community as they help teach and mentor the next generation.