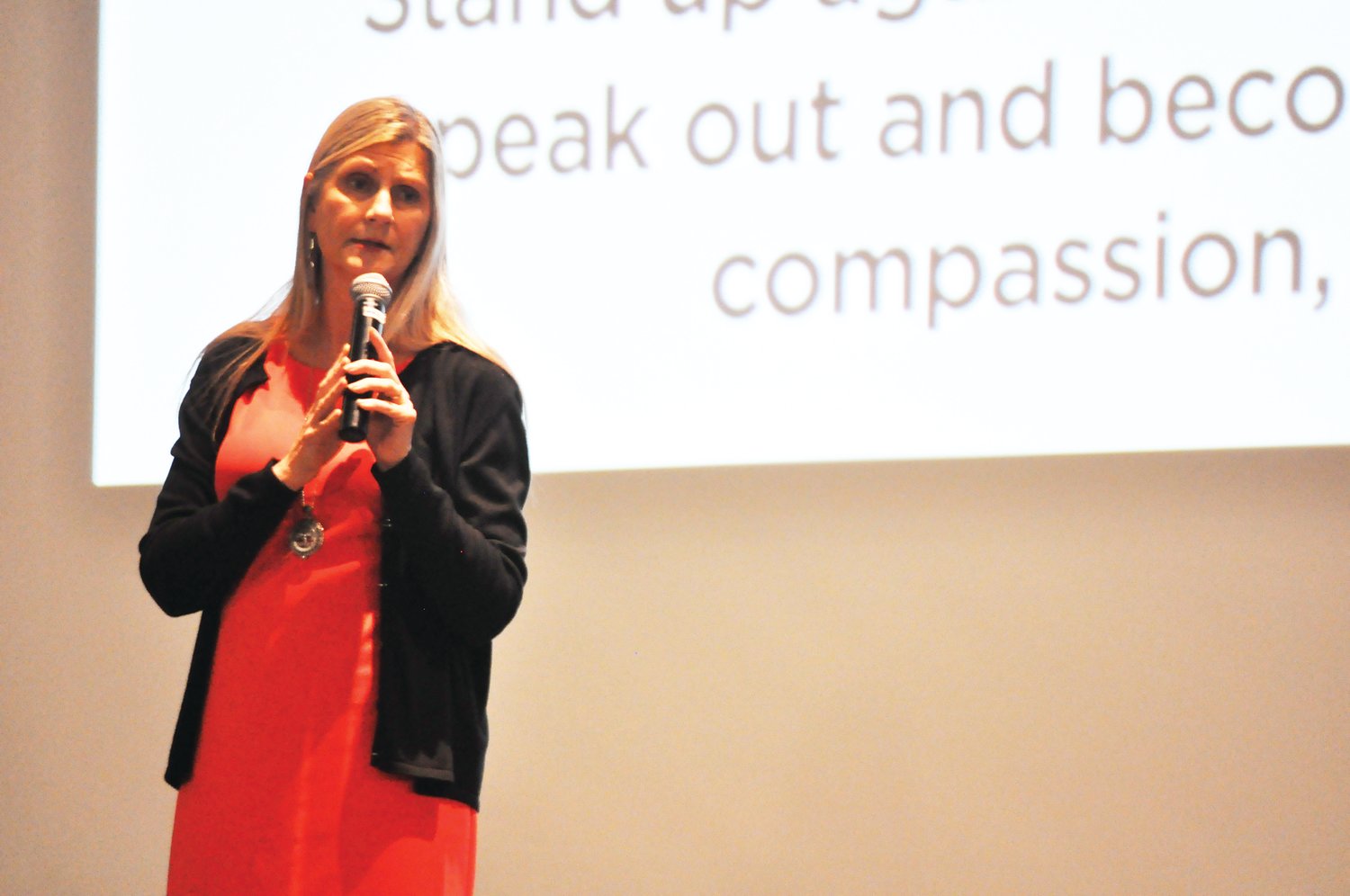 NEW MARKET — As the world marks 75 years since the liberation of Auschwitz, love and forgiveness can prevent history from repeating, the daughter of a Holocaust rescuer said Saturday.

“When you can put those two things together … you have a power greater than any weapon, any army,” Jeannie Opdyke Smith told an audience during Hoosier Heartland State Bank’s Shared Values Awards ceremony at Southmont High School.

Smith’s appearance was part of an ongoing effort to promote Holocaust education in local schools and the wider community. During the ceremony, the bank announced the next group of teachers it is sponsoring for a summer trip to Auschwitz led by CANDLES Holocaust Museum and Education Center.

The number of people who saved Jews from being deported to Nazi concentration camps is disputed. Israel’s government has formally honored more than 22,000 rescuers from 44 countries for their efforts, according to the U.S. Holocaust Museum.

Smith’s Polish mother, Irene Gut Opdyke, managed to hide a group of Jewish laborers in a high-ranking German military officer’s home for nearly two years. When she was caught, the officer agreed not to have her arrested if she would be his mistress.

Opdyke was in nursing school when Adolf Hitler’s forces invaded the country on Sept. 1, 1939, marking the start of World War II. She soon joined the Polish resistance movement, burrowing in the forest to wait for the German forces.

After being raped and beaten by a truckload of Soviet soldiers and escaping from forced labor at a hospital, Opdyke found her way to a town surrounded by barbed wire, where Jews were being marched through the streets.

She watched as a German soldier yanked a baby from a woman’s arms, threw him in the air and shot him. The Jews were led to an open pit where they were executed.

“Oh, God, where are you?” Opdyke screamed as she watched the victims fall into the mass grave. “How can you let something like this happen?”

Opdyke was briefly reunited with her family until the Germans took her father, an architect, to build factories for the war effort. Her parents and three of her sisters went along. She and another sister were pressed into service at a munitions factory, where a German military officer was looking for a housekeeper.

At the officer’s camp, Opdyke befriended a dozen Jews who were forced to work in the laundry room and alerted them to planned raids on Jewish ghettos.

When the officer moved to a villa, Opdyke smuggled her friends into the basement. The Jews helped with the housekeeping while the officer was at work.

Opdyke put her key in the doorknob to keep the officer from unlocking the door if he returned early. When she forgot the key once, the officer discovered her and three of the Jewish women in the kitchen.

“How could you do this?” the officer screamed. “In my own home, under my own nose and after all I’ve done for you? Why?”

He said the police wouldn’t believe that the Jews had been living there without his knowledge.

“I’m going to keep your secret, but for a price,” the officer later told his housekeeper. “You have to be mine anytime I ask, willingly.”

Smith said her mother had no choice but to accept in order to save her friends. Opdyke never told them about the arrangement.

“But she said their integrity would have never let them make that decision,” Smith said.

As the Soviets began driving the Germans out of Poland in 1944, Opdyke undertook her next rescue mission. Using the officer’s wagon, she transported each of the 12 Jews to the forest, where one of the women quickly gave birth to a son.

Ironically, the boy would come to know the officer as his grandfather when his parents later took in the homeless soldier, whose wife had learned of the affair.

Opdyke discovered that her father was shot and killed by the Germans and her mother had suffered a stroke. She and her sisters would be reunited years later.

Arriving in the U.S. on a cargo ship in 1949, Opdyke decided to remain silent about her wartime experiences.

“I love when she used to tell that story,” Smith said. “Standing on the bow of that boat seeing the Statue of Liberty, she said … ‘I’m in a new country, I have a fresh beginning a clean start,’ and she put a do not disturb sign over her memories.”

Opdyke married a United Nations delegate who’d interviewed her at a displacement camp overseas and the couple moved to Southern California, where she began a career in interior decorating.

“She could come into your house with that little accent, ‘Oh, darling, we could do this and we could do that. And it will be beautiful,” said Smith, mimicking her mother’s voice that resembled actress Zsa Zsa Gabor.

When Opdyke answered a call in the 1970s from a college student asking if she thought the Holocaust happened, she decided to break her silence about the war.

With tears streaming down her face, Opdyke told her family, “I am willing to go anywhere to talk to anyone so that these things never happen again, so that history does not ever repeat.”

Opdyke spent years speaking to groups around the world. In 1999, she published a memoir, “In My Hands: Memories of a Holocaust Rescuer.” The book was turned into a Broadway play, “Irena’s Vow.”

Smith paid tribute to another Holocaust survivor, Eva Kor, who died last summer during her annual trip to Poland. The CANDLES museum, which Kor founded in memory of the victims of Nazi medical experiments, continues to lead tours of Auschwitz.