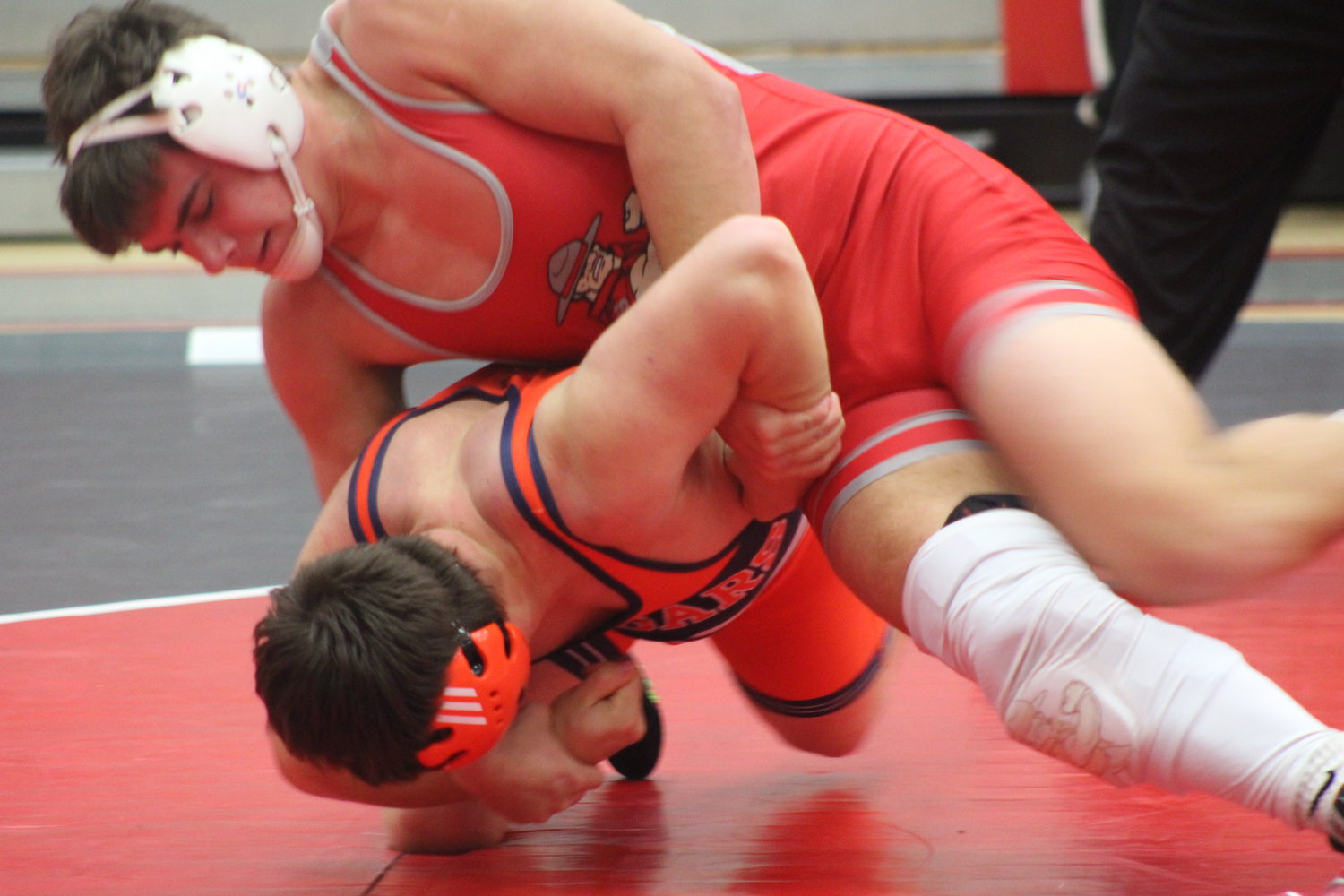 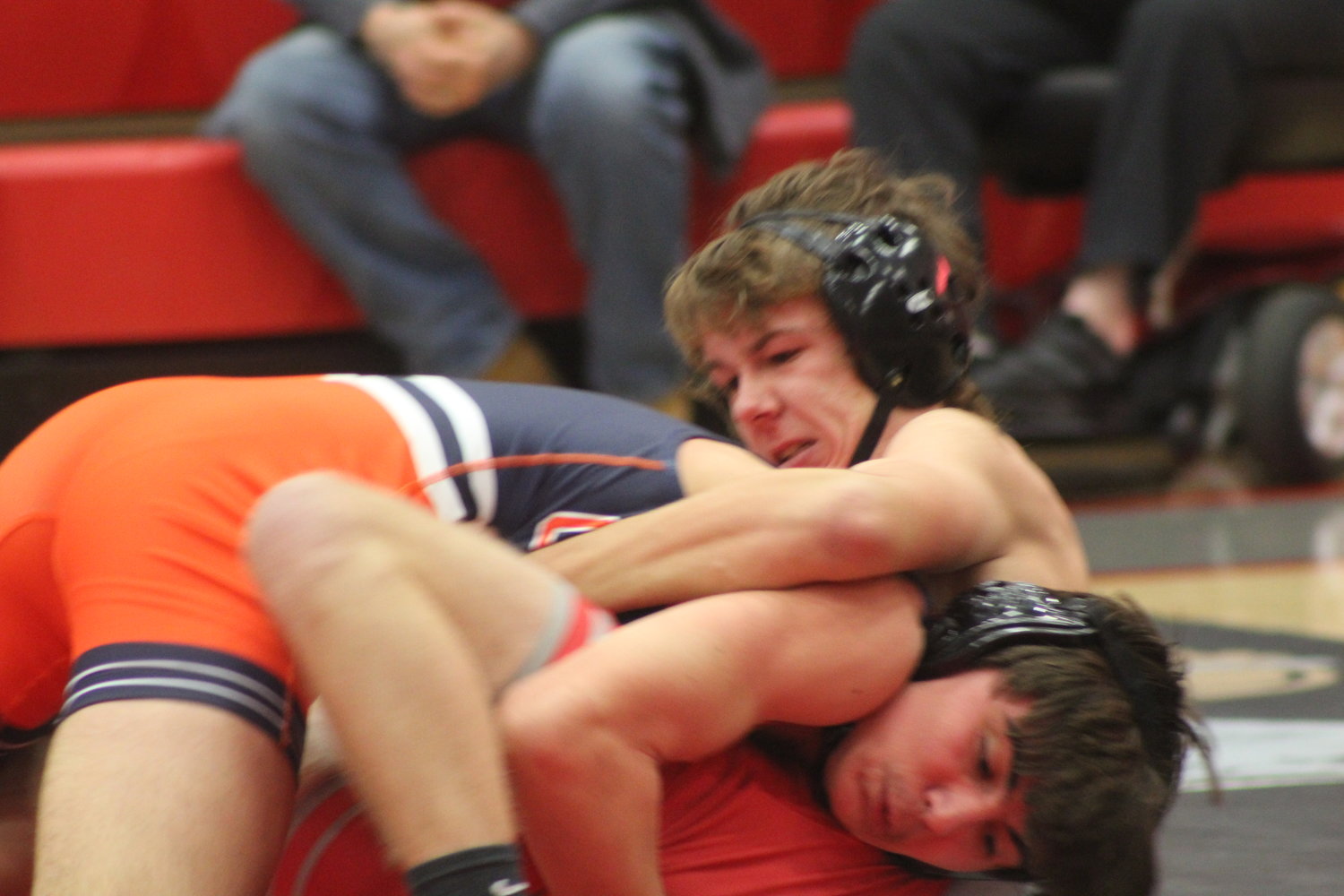 Justin Emerson pinned his opponent to pick up a win at 145 for the Mounties.
Codey Emerson/Journal Review 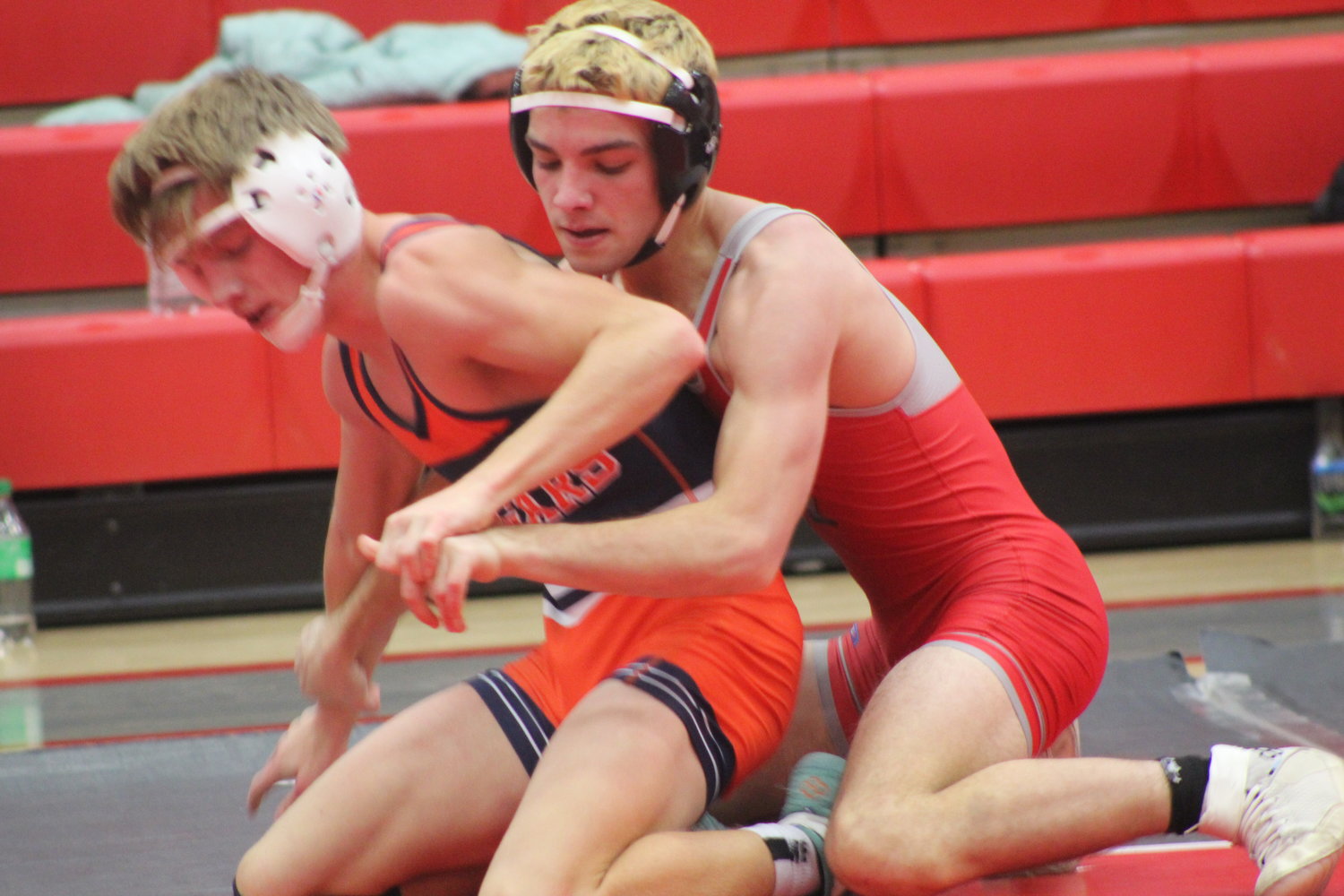 Jeffrey Pine battled at 126 pounds but fell in his match.
Codey Emerson/Journal Review 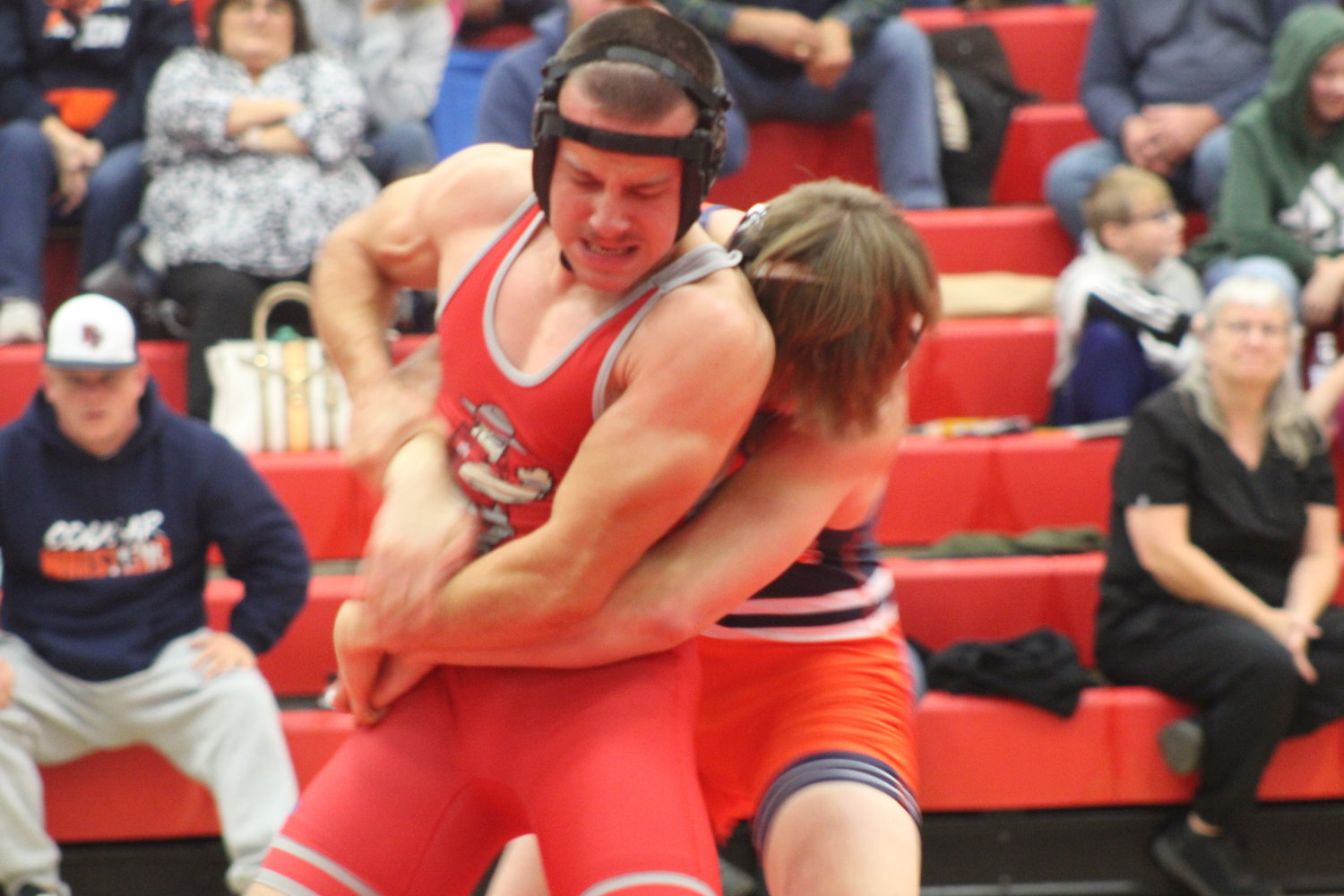 NEW MARKET — Junior Waylon Gomez is in his first season wrestling with Southmont this season. On Tuesday Gomez was asked to play the role of the hero for the Mounties as heading into his match, Southmont trailed North Putnam 33-30. With the pressure of the meet upon his shoulders, Gomez stepped up when his team needed him the most as he was able to pin the Cougars’ Paxton O’Brien to give the Mounties the comeback win 36-33.

“I told Waylon that it was probably going to come down to him,” Southmont coach Jamie Welliever said. “I’m happy for him to get that opportunity. He’s a new kid to our team who came from football and we finally got him out to wrestling and he’s only been at it a few weeks. For him to finish off a big dual meet like with a pin like that for us is pretty cool. He’s been a great kid for us already and is very coachable and I know he’ll only get better as the year goes on.”

Heading into the final two matches of the night South trailed 33-24 after dropping four straight. Wyatt Woodall got the Mounties back on track with a pin at 195 to set up the winner take all match for Gomez.

Ayden Dickerson got things going for the Mounties on the night with a win at 285. Brier Riggle then pinned his opponent at 106. Three straight wins for the Cougars then came as a forfeit at 113 from Taylan Dinius and both Thomas Woods at 120 and Jeffrey Pine at 126 both fell via pinfall. South then responded with three straight pins of their own as Maddox Cade at 132, Marlin Williams at 138, and Justin Emerson at 145 all picked up wins.

Close wins aren’t new in this early season for the Mounties as this past Saturday at the WeBo Duals, South captured wins over Western Boone and Lebanon in dramatic fashion.

“We’ve now had three guys that have had to win their final match for us to come out on top,” Welliever said. “Tonight we got far enough into the meet and were doing the math and knew it’d was going to come down to the wire. Max Musick despite the loss (via decision) battled out there and still gave us a chance. I was really proud of him and thought he stepped up big for us.”

At 152 Kaden Newgent fell via decision as did Musick as Welliever noted. Micah Kiger at 170 and Heath Chesser at 182 both fell via pin and that set up the last two matches of the night with Woodall and Gomez.

Early on in the season the Mounties are still working out the kinks a little bit as some of the newer wrestlers are adjusting to their roles. Despite the adjusting, with the victory the Mounties still are un-defeated on the season with a 7-0 record. Both Gomez and Dickerson are having to replace two seniors from a year ago in Collin Martin and Zayden Dunn.

“We had a lot of seniors (five in total) from last year’s team that we could rely on and usually get six points out of those guys,” Welliever said. “We only have two this year (Emerson and Newgent) who go out and battle every night. We’re mixing in lineup of freshman, sophomores, juniors and seniors this year so to be 7-0 at this point is pretty awesome.”

The Mounties will take their undefeated record into Saturday where they will travel to compete in the Calumet Duals. The likes of Westfield and some other tough opponents will be there as the South looks for another strong showing.