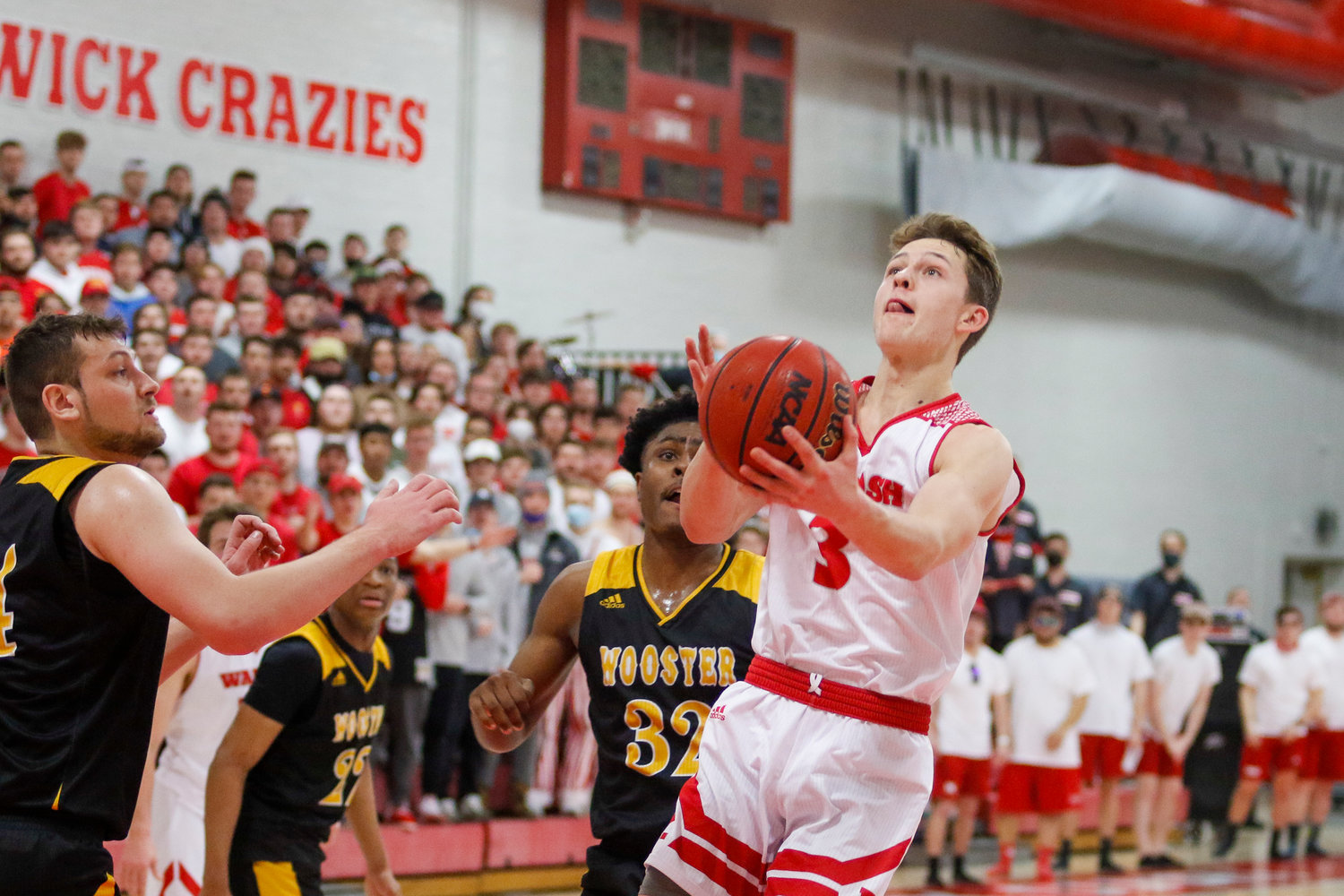 Jack Davidson is living out his professional dream of continuing his basketball career. The all-time leading scorer in Wabash College basketball history is currently on the training camp roster for the G-League Swarm.
Photo courtesy of Wabash College Athletics
Posted Sunday, October 30, 2022 10:56 am
Codey Emerson | codey@jrpress.com

Wabash College basketball’s greatest player and all-time leading scorer Jack Davidson may be done with playing ball with the Little Giants. However that doesn’t mean his basketball career has ended.

After leading Wabash all the way to the NCAA Division III Final Four, Davidson began looking at what his hoops future might hold. The process was long as he explored his options which included looking at playing overseas. That route had teams interested in him but that option just fell through and wasn’t what the basketball gods had in mind.

What followed was Davidson receiving a handful of G-League workouts. The first came with the Fort Wayne Mad Ants, who are the affiliate of the Indiana Pacers. That workout didn’t result in a training camp invite so as he did all throughout this entire process, Davidson and Wabash College Men’s Basketball coach Kyle Brumett kept their heads down and continued to search for chances.

Davidson then got to work out for the Greensboro Swarm, who are the affiliate for the Charlotte Hornets. The Swarm are coached by former Little Giant player Jordan Surenkamp and combined with the Wabash connection and the successful tryout, Davidson got the break he was looking for as he is currently out in North Carolina as a member of the Swarm’s training camp roster as he’s battling for a spot on their roster for this upcoming season.

“It was just a big relief when I my agent got the call and told me they wanted me,” Davidson said. “I had spent the entire summer working out and staying ready and honestly thinking I would end up overseas. We had talked with different teams in a lot of different countries but for whatever reason it just didn’t work out. After the workouts I had with a few G-league teams it was just about a waiting game. I’m just hoping to make the best of this opportunity.”

“Everyone spot on our team is earned and that’s the case with every team across the G-League and the NBA,” Surenkamp said. “I talked with Coach Brumett early on in Jack’s career and we knew that he’d be special and that obviously came to fruition during his four years at Wabash. Jack is just an all-around great player and his accolades speak for himself. Shooting is the most transferable skill at any level of basketball and that part of his game is arguably the best part about him.”

Wabash prepares their graduates to be great representatives of the school and of themselves. Davidson is getting to live out his team while being able to represent not only Wabash but the city of Crawfordsville on one of the biggest stages of professional basketball.

“Jack is a great example of Wabash men are about,” Brumett said. “It shows you how much he cares about where he comes from. There are plenty of paths that he could’ve chosen to do after he graduated, but he wanted to play basketball. There’s just so much pride with our program in seeing him do what he’s worked so hard to achieve. There was a big sigh of relief when I heard he got the offer from Greensboro. He gets out of bed every day of his life and is elite in everything he does.”

The biggest difference so far while Davidson has been out working with the Swarm according to him is learning a new offense and the style of play that the Swarm run. When it comes down to it, the level of competition is a step up from the college level, but Davidson is more than ready and has embraced another challenge.

“To be used to running the same offense the last 5 years at Wabash, over here you’re thrown into a new offense and anew defensive scheme,” Davidson said. “That’s been the biggest thing is getting used to that. Once I can familiarize myself with that it makes things a lot easier. Meeting all of the guys and getting to be in a new city, everything has been great so far. It’s been a blessing to be here and I’m just thankful.”

Davidson continues to prove that it doesn’t matter if you’re a D1 athlete or D3 athlete. With hard work and the determination and desire that he possesses no one was going to stop him from chasing his dream.

“With the amount of time that goes into scouting college players at the G-League and NBA levels, if you’re good enough someone will find you,” Surenkamp said. “Jack is a perfect example of that. Even though it’s D3 I know first hand from my time there that there are no cupcake games at Wabash. You’re playing the toughest schools from around the country and competing in the toughest conference in the country. To me and everyone here at this level of professional basketball the number beside the division doesn’t matter. What matters is what can that player bring to a team, what assets ans skills do you have that will translate to winning, and can you buy into a role that’ll be given to you, and I think Jack has all of those things we’re looking for.”

As Brumett mentioned earlier the opportunist and chance to represent Wabash and the city of Crawfordsville isn’t something that Davidson is taking lightly. He’s proud of where he’s come from and wants to d o his very best to make everyone back home here in Indiana proud as well.

“To do this and being able to represent Wabash means the world to me,” Davidson said. “Coach Brum, coach Sully (Pat Sullivan), and the entire community of Crawfordsville all have a special place in my heart. I remember looking back and thinking how crazy it was of the support we got as a school with less than 1,000 students. I’ve gotten so many texts from so many different people telling me they’re rooting for me and cheering me on. Just having that connection with a community like is special and I just want to make everyone proud.”