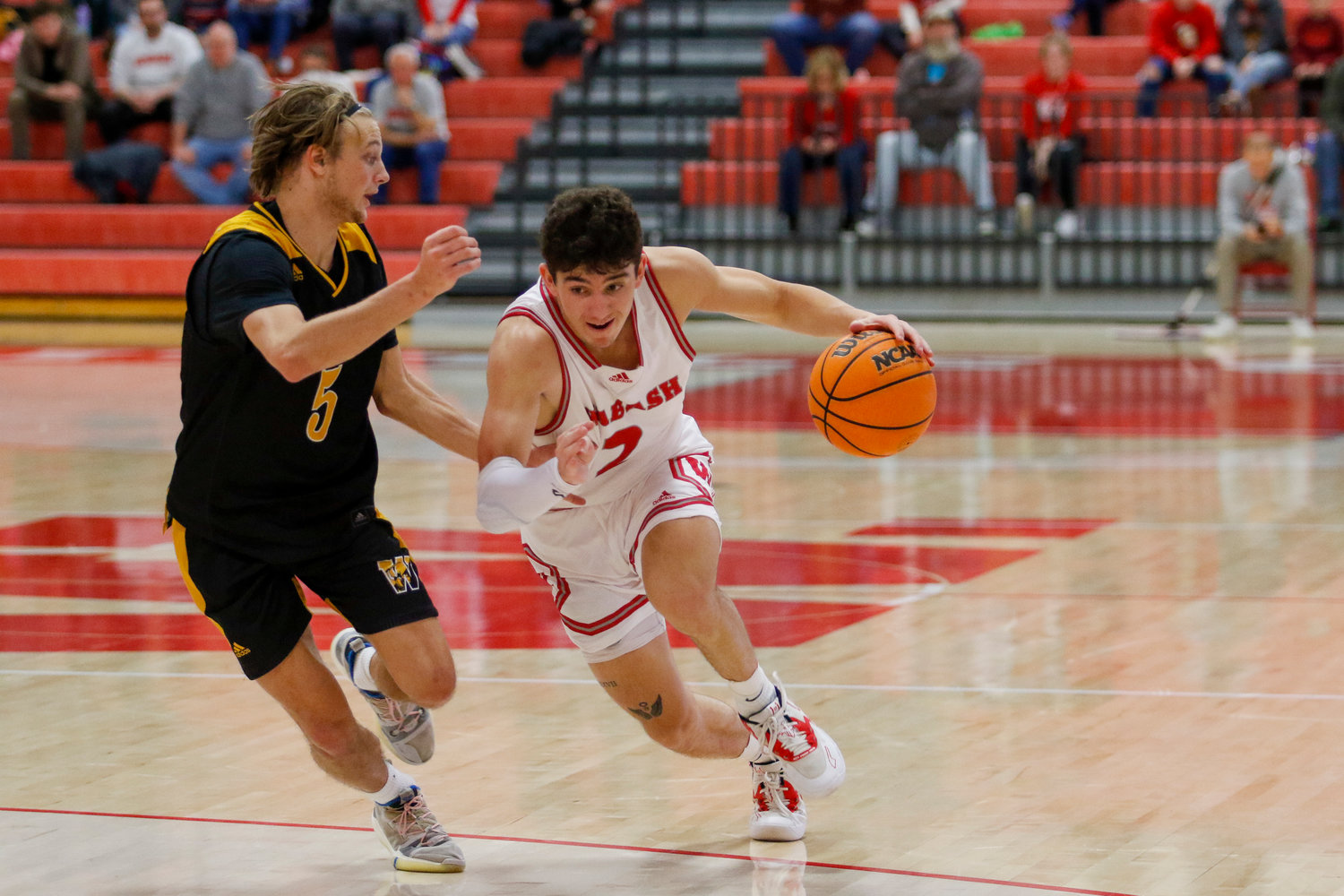 Vinny Buccilla scored 16 points and was a perfect 6-6 from the field as Wabash got a big time 83-68 win over The College of Wooster on Saturday. Wabash, Wooster, and Ohio Wesleyan now sit all 4-1 in the NCAC.
Photo Courtesy of Wabash College Athletics
Posted Sunday, January 8, 2023 1:55 pm
Codey Emerson | codey@jrpress.com

Feb. 16 2022. That was the last time that Wabash and Wooster met. It was only for the North Coast Athletic Conference title and a trip to the NCAA Division III Tournament. Everyone remembers the Little Giants pulling out a thrilling 85-84 overtime win. Well now it was time for the two teams to square off yet again as the Wooster made the trip to Chadwick Court on Saturday as they held the top spot in the NCAC at 10-2 (4-0) on the season. What resulted in nothing short of red-hot shooting display in the second half, allowed the Little Giants to once again down their conference rival as they pulled away for a 83-68 statement win.

After the first 20 minutes the Little Giants held a 30-29 lead, but in the final 20 minutes Wabash shot 23-33 from the floor including 7-10 from three which resulted in a 53-39 advantage for the home team. For the game Wabash shot 26-42 (62%) from the field and 20-26 (77%) from the free-throw line. The win marked the fourth straight win over Wooster for the Little Giants. Only one other team in the history of the NCAC has beaten the Fighting Scots four straight times.

Little Giants coach Kyle Brumett knew the significance of this game and was all smiles as his team turned in a season-best performance.

“We’re a much better shooting team than we have shot the ball this year,” he said. “We went into halftime talking about being more ready to shoot and Chadwick Court is a very hard place to come in and play. It was a battle of two really great teams and Wooster is a program that we’ve tried to model ourselves after here at Wabash. This game was circled because of the respect that we have for them as a program and our players feel that as well.”

The scoring for the Little Giants was about as dead even as it could’ve been as Avery Beaver led the Little Giants with 18 points. Vinny Buccilla was a perfect 6-6 from the floor as he ended with 16. Edreece Redmond notched 14, Ahmoni Jones 13, and Sam Comer scored 12 as Wabash had five players in double figures.

Wooster had three players score 10+ as Najee Hardaway tied Beaver with a game-high 18. Elijah Meredith and JJ Cline both ended the game with 10.

“We had five guys in double figures, but I want to give a ton of credit to Gavin Schippert who got the start today,” Brumett said of the 6’7 freshman. “His line isn’t going to jump off the page but he guarded the big guy about as well as he could have today. Champ (McCorkle) too fouled and was banging bodies with their backup big who also fouled out so that tells what kind of physical battle it was down there. If you’re not ready to battle those guys, they’re going to whip you.”

The win for Wabash improves their record to 11-3 (4-1 NCAC) as there is now a three-way tie atop the conference with the Little Giants, Wooster, and Ohio Wesleyan all 4-1 and their one conference loss has came against one another. Wooster beat Ohio Wesleyan who beat the Little Giants. While the win puts the Wabash back in the thick of things in the NCAC, Brumett and his team know there’s still plenty of basketball left to be played.

“This can be one of those season defining wins for us as long as we don’t have any more season defining losses,” he said. “We had a really bad loss early in the year but wins like feel great. Our guys were ready to compete from the get go and that’s what I’m most happy with. Our guys performed when it mattered most and we have to build off this as we have another big NCAC week this week on the road.”

The Little Giants will be back in action beginning on Wednesday when they travel to take on Hiram. Saturday Wabash will make the short trip to Greencastle for a rivalry game against DePauw.