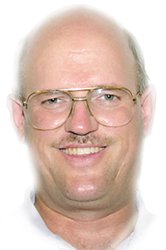 Now that is funny to my old softball team who found out I can’t swim when they threw me into the pool a long time ago, but for today, and the rest of us, it is the regular old metaphor.

This Sunday, I get to do something I have never done before.

I’m heading to Philadelphia this weekend to cover the NFC championship game between the 49ers and Eagles for Fox Sports.

Yes, I have been to the NFC title game before, and have done stats for Fox, but this weekend is completely different.

I have the privilege of working in the booth with the game announcers, Kevin Burkhardt and Greg Olsen, as they do the play by play and analysis of the game.

I’ve done stats for that game, but never been in the chair I will occupy, that close to the action.

Since it has been a couple years since we were sharing stories, I was asked to give a brief review of just what it is I get to do when I flitter all over the nation covering games.

In brief, I’m the numbers guy.

In the biz, I’m known as a stats person, and all the stats that are fit to print fall under my umbrella.

I have a mountain of charts that I work with in the booth. On those charts are season, career, and now in the postseason, playoff numbers.

Player numbers, such as a quarterback’s longest throw, or a running back’s best game, or a wide receiver’s career catches.

There are team numbers along those same lines. Single game, best of a season, best of a career, best of the playoffs. We have data from the teams and from the league as a whole.

During the game, I chart what is going on, keeping a play-by-play of the action, so I can quickly refer to it, or answer a question from the announcers or the production truck.

There is a small army of folks on headsets in the truck, and we have folks back at the office with their fingers on the keyboards, ready to look up the coolest or craziest piece of trivia possible. We are all in contact with each other, so when I say I have voices in my head, I am speaking the absolute truth.

My first priority, however, is to the announcers in the booth.

When a play ends, they need to know how far the play went, or if it is a long play, might that be a season-long play or maybe even a career-best.

So the announcers get the first scrap of paper with that info, while at the same time, I’m telling the folks in the truck, because they are putting that same number into the computer system to update all the graphics you see sprouting from the score bug.

We are looking for any trends that will help us tell the viewers just what is going on in the game, because, in the truest sense of the word, we are absolute fans and think like fans. We ask the same questions you ask at home — how is this team winning, why is this team losing ...

We look for stats and data to try and explain just that.

It is an incredibly intense world for those three hours or so, and we all love it.

Oh yes, there are hours of research and prep during the week and the days leading up to a game. There are crazy things that happen that change a game on its head and send us dashing for another angle, or totally destroy an angle we had been working on. A fantastic stat can become meaningless in one play.

It’s what keeps getting me on planes at 5 in the morning, or flying the overnight back instead of getting a good night’s sleep because I am goofy enough to do this for pro basketball, college basketball and yes, even high school sports.

It got me out in the blizzard yesterday and today because I had a Pacers game. There may or may not be a high school game tonight, another Friday, and then there is that very early flight on Saturday morning to Philly.

My trip to the Bay area last weekend was pretty much on time and without much drama. A rarity for most trips to California.

The winter weather is going to be away from the East Coast by the weekend, so I’m hoping for a trip not worthy of a column in two weeks.

Wait, in two weeks I’m heading for the Super Bowl.

We already have our topic.

Jeff Nelson is a frequent contributor to the Journal Review and works professionally for Fox Sports assisting with NFL broadcasts and the Indiana Pacers.