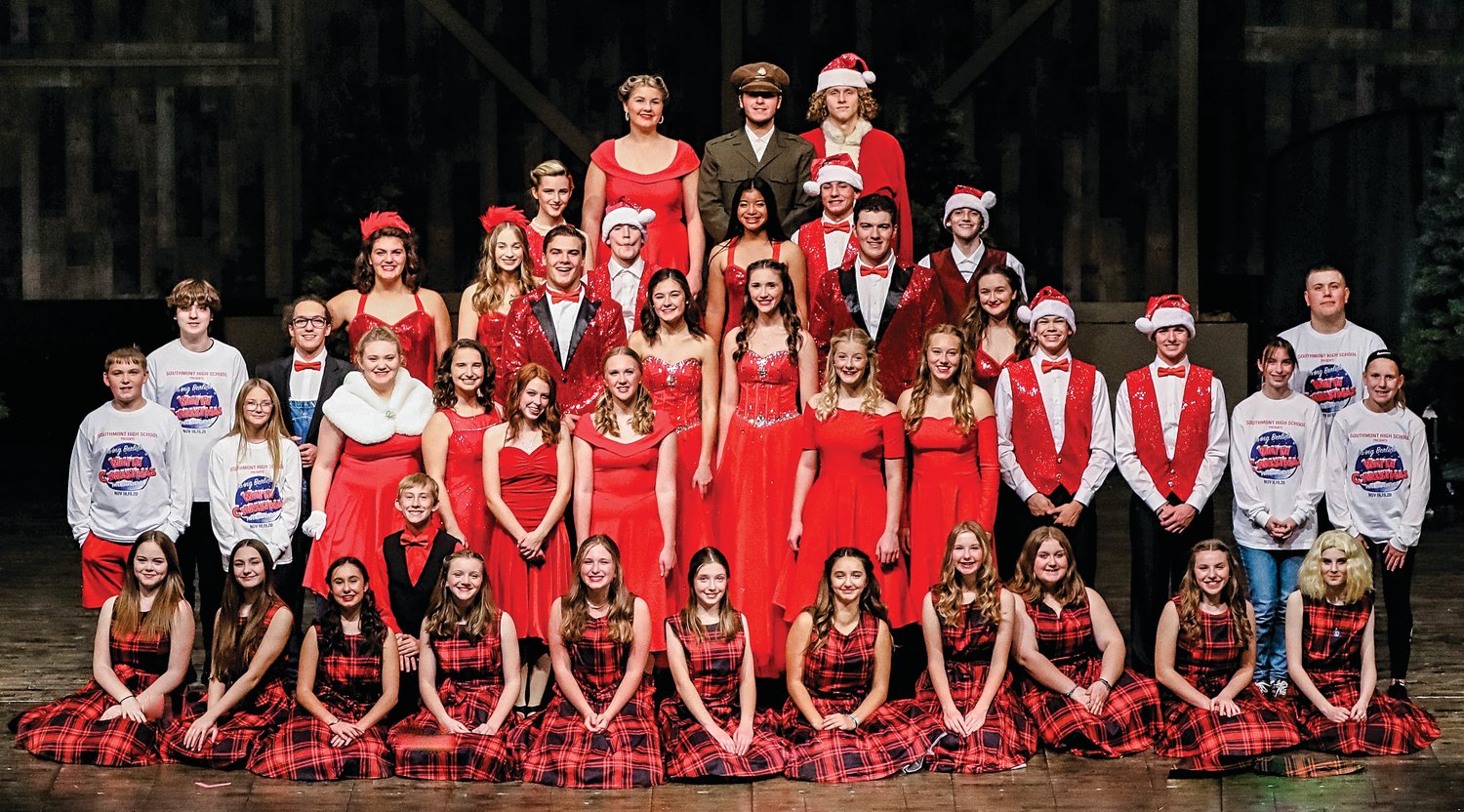 Southmont High School will perform White Christmas at 7 p.m. Friday and Saturday and 2 p.m. Sunday in the high school auditorium. Tickets may be purchased online or at the door.
Photo Provided
Posted Tuesday, November 15, 2022 1:15 am
If You Go

Performance are 7 p.m. Friday and Saturday and 2 p.m. Sunday at the high school auditorium. Tickets may either be purchased online at www.showtix4u.com under Southmont or at the door beginning 40 minutes prior to performances.

Everyone’s holiday favorite is sure to have you “dreaming of a white Christmas” when Southmont High School performs Irving Berlin’s classic musical White Christmas at 7 p.m. Friday and Saturday 2 p.m. Sunday in the high school auditorium.

Based upon the popular 1954 movie starring Bing Crosby and Rosemary Clooney, the Tony Award-winning musical by David Ives and Paul Blake tells the heartwarming story of going to extraordinary measures to help others.

White Christmas follows World War II veterans Bob Wallace (Waylon Gomez) and Phil Davis (Wyatt Woodall) from war-torn Europe to the heights of Broadway. The performing pair discussed the joys and challenges of premiering such a beloved story for the community.

“I think the entire cast and crew has felt both genuine excitement and a real sense of responsibility when it comes to being the first to perform this show in our area,” Gomez said, “and I’m very proud of where we’ll be setting the bar.”

For his part, Woodall raved about the show’s dance numbers, provided by choreographer Preston Dildine.

“This show is very dance heavy, which I love,” Woodall said. “We’re waltzing and swing dancing and salsa dancing. You name it, it’s in there.”

As the story begins, the successful Wallace and Davis song and dance duo encounter sister act Betty (Alivia Williams) and Judy (Stella Snook) Haynes at Jimmy’s (Tovi Powell) club, and follow them to an idyllic Inn in Vermont. As seniors, Williams and Snook shared the special nature of performing as sisters in their final high school musical.

“Alivia and I have been in every musical together since sixth grade,” Snook said, “and this show is the perfect way to finish out our high school theater career.”

Best friend and castmate Williams concurred, expressing her own joy at the experience.

“Stella (Snook) and I have grown up together,” Williams said, “and we’re like sisters in real life. Getting to have her by my side for this show has been really special.”

When the foursome arrive in Vermont, Bob and Phil discover that the Pinetree Inn is run by their former army commander, General Waverly (Jimmy Clester), with help from his cantankerous housekeeper and former Broadway scion Martha (Kelsey Thompson), his precocious granddaughter Susan (Kylee Reeves) and his loveably slow-moving caretaker Ezekiel (Jordan Endicott). Unfortunately for the General, the temperature in Pinetree is a balmy 70 degrees, putting the winter ski lodge into which he has sunk his whole life savings on the verge of collapse.

Will the Inn, and the couples’ budding romances, be saved? Will it finally snow? You’ll need to head on down to Southmont to find out.

Tickets may either be purchased online at www.showtix4u.com under Southmont or at the door beginning 40 minutes prior to performances. The production is artistically directed by Amy Woodall, musically directed by Sarah Fadil and choreographed by Preston Dildine. Nicole Thompson and Angie Williams serve as the show’s producers. Amarah Shannon, Isabella Cade, Noah Myers, Jacob Peck, Ally Wallace, Hunter Thompson and Carrie Pool serve as stage crew. White Christmas is presented through special arrangement with Concord Theatricals.