Athenians and Chargers square off in SCC opener 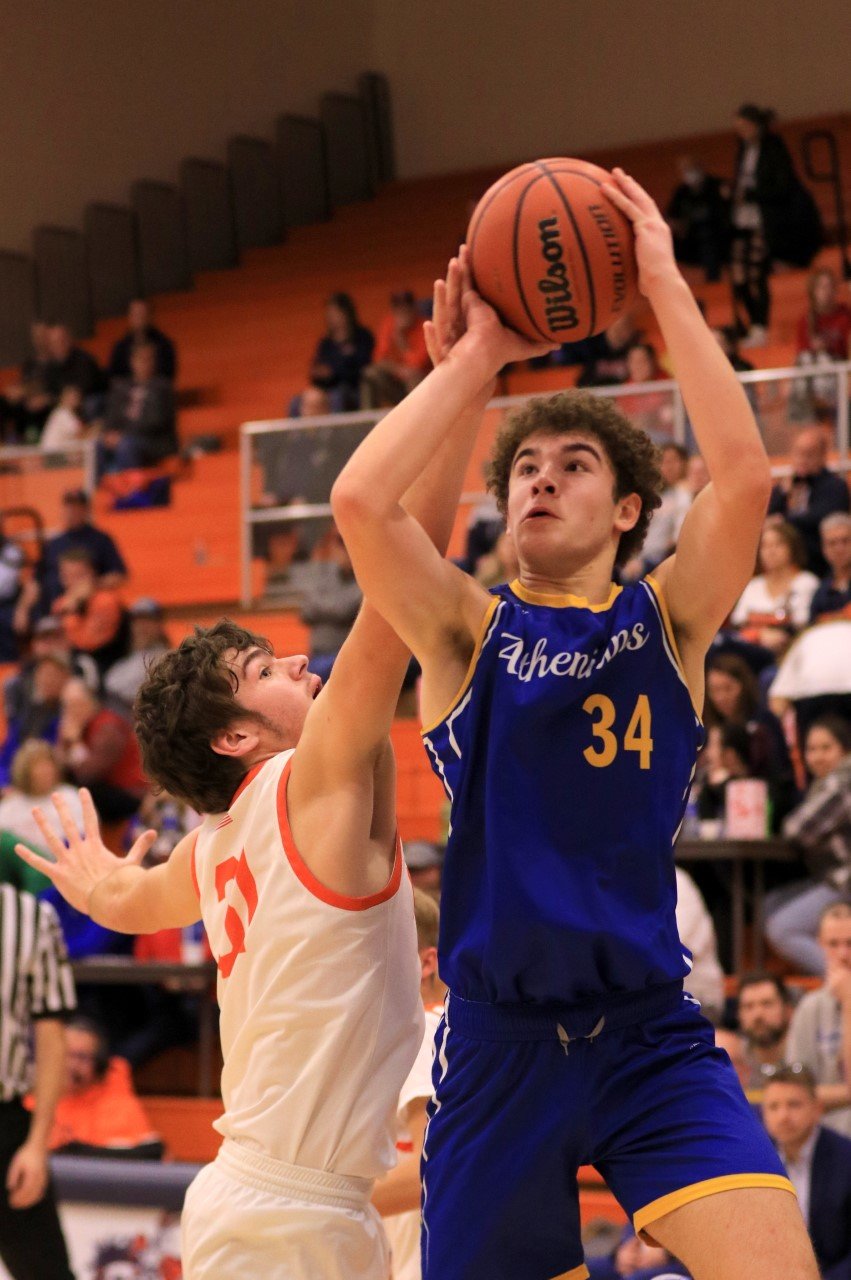 Crawfordsville’s Alex Saidian and North Montgomery’s Drew Norman are the two big men down low for their repsective squads. The Athenians and Chargers will square off for the second time in nearly three weeks when they meet up in the opening round of the 16th annual Boys Sugar Creek Classic on Friday.
Journal Review File Photo
Posted Wednesday, January 4, 2023 4:58 pm
Codey Emerson | codey@jrpress.com

For the second consecutive season county rivals Crawfordsville and North Montgomery will square off in the opening round of the 16th annual Boys Sugar Creek Classic on Friday at Crawfordsville High School. Just like a season ago, the two teams are coming off just meeting up a couple of weeks ago as CHS earned a 45-39 win over the Chargers back on Dec. 16.

Athenian coach David Pierce notes how as it typically is when his teams play the Chargers, he expects a full battle for 32 minutes.

“Playing a team, especially a county rival twice in a matter of weeks is always hard,” he said. “Anything is possible in these types of games. Some kids might get nervous and don’t shoot it well or someone you might not expect step up to the plate. Of all the Classics that we’ve had in a while I think this one is wide open. North has played well lately including in their Delphi tournament. They’re a different team from the last time we played them. Coach Arnold always does a great job with them and I know they’ll be ready to go.”

Senior guard Cale Coursey and Junior Drake Burris each lead CHS in scoring at 10.4 points per game. Ethan McLemore adds 9.3 a contest while Sophomore big man Alec Saidian scores 8.9. This year in the Classic will be the first time for most on CHS, excluding Coursey, that they have played in the Classic. Pierce also noted how he will prepare his guys for the enviroment and big time atmosphere that his team will be playing in front of on Friday and Saturday.

“There really isn’t a great way to prepare them for that,” Pierce said. “We’ll obivously try to do some things early on to get them settled in as quick as possible. Part of it is going to be if we can have success early on and get some easy buckets, that will allow us to settle in easier. I think the weeks leading up to Friday we’ve had our best practices. We’re just going to have to execute well and not take bad shots against a great defensive team.”

The Chargers are coming off a loss on Tuesday to Sheridan so they won’t be dealing with a long layoff like CHS will be. Sophomore Kelby Harwood leads the Chargers with 12.4 points a game while Jarrod Kirsch averages 9.1. Crawfordsville holds the edge in overall scoring as they average right around 50 points per game with the Chargers scoring just 41.

“Crawfordsville is going to be another battle,” Charger coach Chad Arnold said. “They’re obviously well coached and have good players. We have to be able to defend at a high level and that’s where it starts. If we’re able to do that then we’ll give ourselves a good chance.”

The Athenians come into this year’s Clasic as the defending champions as they defeated Southmont in last years championship game. For whatever team may walk out on Saturday night as Champions, Pierce says these two days are something that can change the direction of the season for any team.

“It’s a huge confidence booster for any team that’s won this tournament,” Pierce said. “All of a sudden when you get to the tough part of your schedule, the winner has played in big games and in front of big crowds. Next thing you know you start to work a little bit harder in practice. The swagger that the winning team carries themselves with too changes. They walk into gyms and expect to win. For us our JV guys last year who are now those varsity starters have seen a lot of winning and they expect that to continue as we head into this Classic.”

Crawfordsville and North Montgomery will be the second game of the evening on Friday as they will take the court after the conclusion of the first game between Southmont and Western Boone.