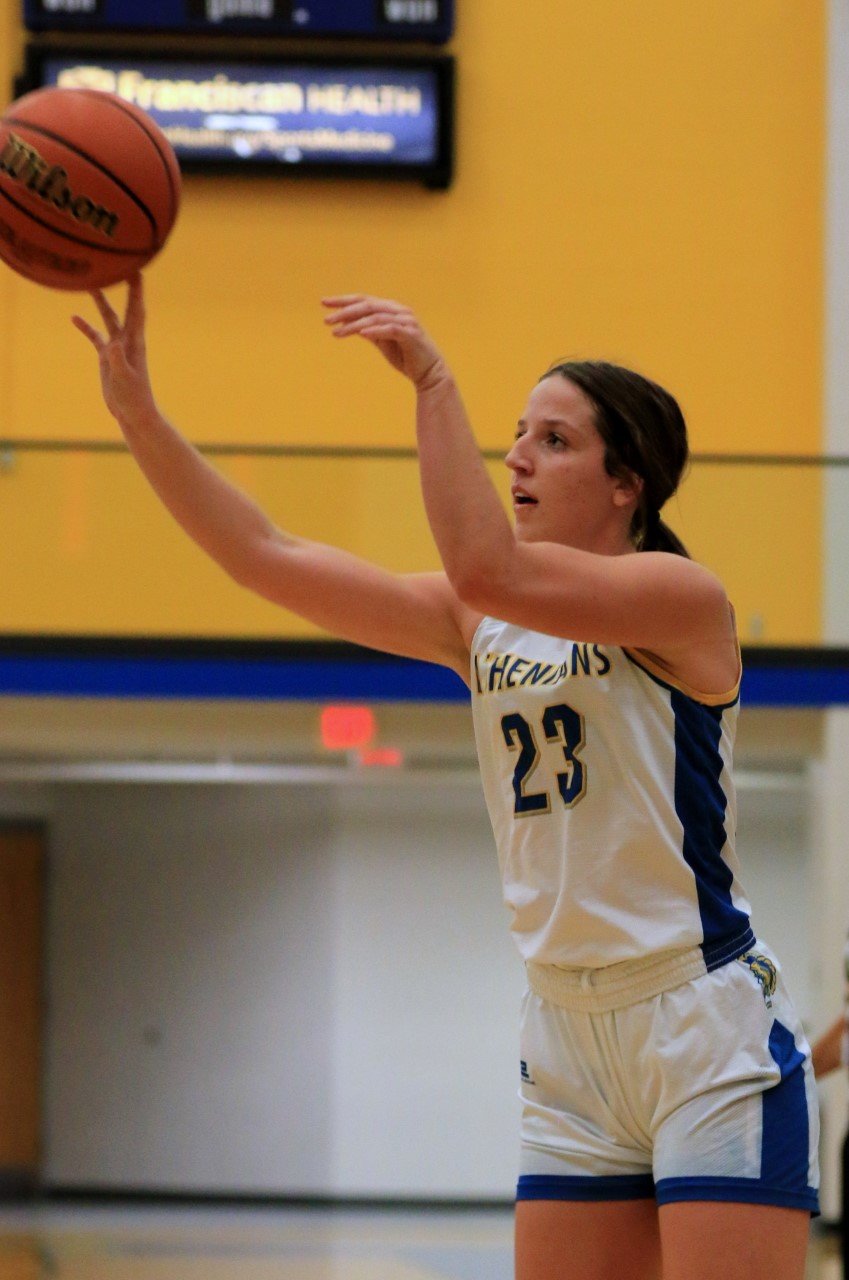 Taylor Abaston had a big night with 20 points and 14 rebounds along with plenty of blocked shots to lead Crawfordsville to a 52-46 win over Attica.
Journal Review File Photo
Posted Sunday, December 4, 2022 10:39 am
Crawfordsville 52, Attica 46

Crawfordsville girls basketball has struggled on offense so far in their 2022-23 season. Finally on Saturday the young Athenian team showed what they are capable of as CHS defeated Attica 52-46. The 52 points are a season high for CHS and they scored those points using on onslaught of threes. CHS drilled 11 triples as they fired early and often from downtown. For the game the Lady Athenians shot 11-27 (41%) from behind the three points line as for the third straight season the Crawfordsville has made at least 11 threes in a game.

“The thing that impressed me most tonight was that everything came off of good basketball movement like drives and kicks,” Crawfordsville coach Tyler Smith said. “The things that we’ve been working on finally showed up. I’ve been around the game a long time and when you start doing things like that, that’s when shots start to fall. It felt really good to have the girls rewarded for their hard work tonight.”

Junior Taylor Abston led the way for the Athenians with 20 points and 14 rebounds and added plenty of blocked shots as well in the win. Senior Elyse Widmer had one of the best games of her career as she knocked down four threes to end the game with 12 points. Madi Hedrick drained three threes and ended the game with 12. Cville shot 17-61 (28%) from the field largely because they secured 20 offensive rebounds to finish with 42 total boards for the game.

“We probably hit more threes tonight than we have all season,” Smith said of the three-point barrage. “Everything was flowing tonight and nights like tonight are a big confidence builder for our shooters. We’re starting to see things come to fruition I think. Obviously we don’t expect to hit 11 every single game but to be able to hit more than we normally do will only be a good thing moving forward.”

Attica (2-4) was led in scoring by Aleah Cruz who scored 15 for the Red Ramblers. Adyson Goodwin also scored 14. The visitors committed 18 turnovers to just 12 for the Athenians while shooting 17-50 (34%).

With having the young team like the Athenians have this season, Smith and his coaching staff know and believe in his team to be able to play this way, it was just a matter of getting his team do have the same mindset. Nights like Saturday go a long way for Smith to try and get that same mentality.

“I was really excited for our senior Elyse tonight to have her knock down four threes,” Smith said. “She’s one of our hardest workers and she deserved a night like tonight. All of our wins so far have been close to where we’ve just been able to find a way. We hope to use this as momentum with just two games the next couple of weeks. I’m proud of us for being able to get the job done.”

CHS improves to 3-8 on the season with the win and as Smith alluded to, play just twice more in the calendar year as they’ll travel to Parke Heritage on Thursday for a matchup with the Wolves before taking on county rival North Montgomery to conclude the first half of the season on Dec. 16.