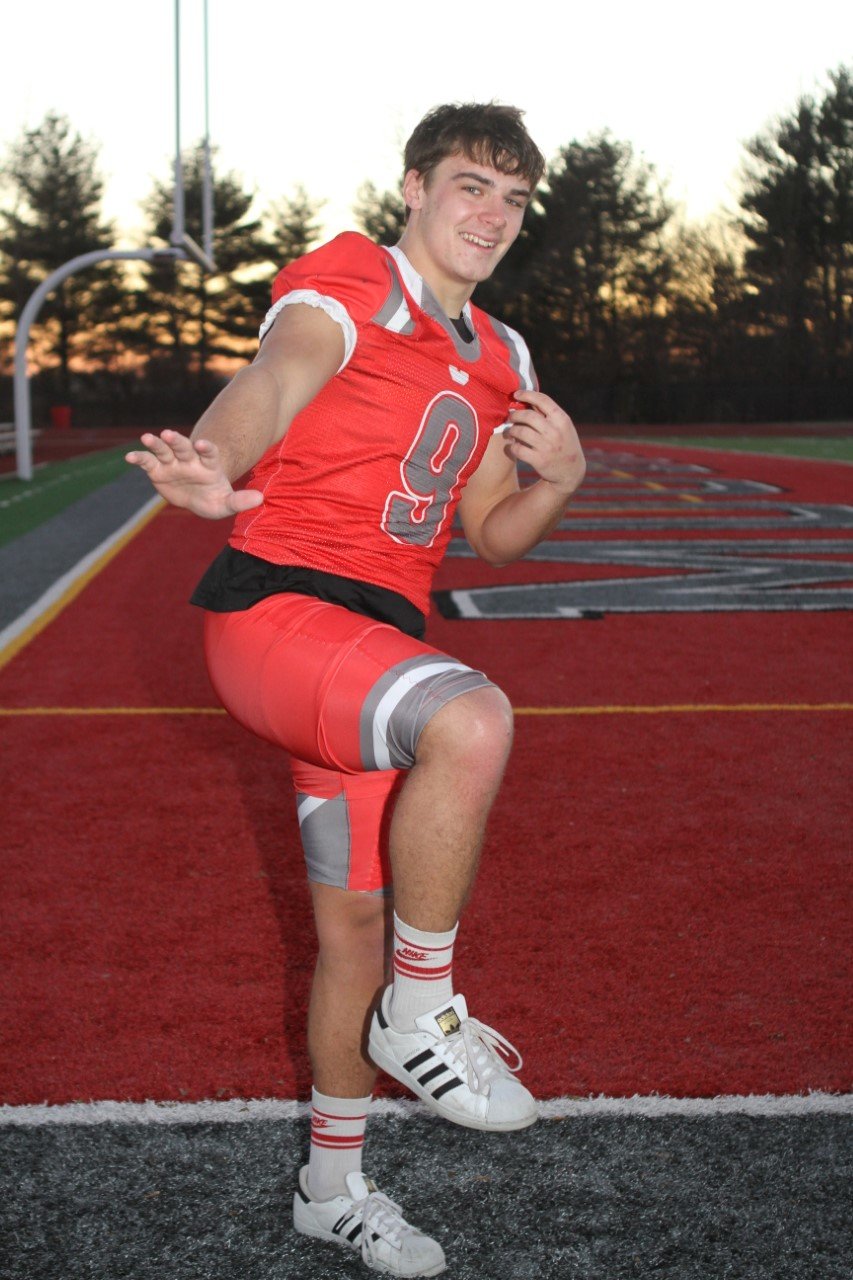 Southmont's Wyatt Woodall had another outstanding season for the Mounties leading them to a 7-4 record while surpassing 1,000 total yards on offense and recording over 100 tackles on defense.
Lori Poteet/Journal Review
Posted Wednesday, December 7, 2022 2:29 pm
2022 Football All-Area Team

Most players in football are trying to avoid contact with the opponent. That simply isn’t the case for Southmont’s Wyatt Woodall. The junior fullback and linebacker welcomes contact and it usually doesn’t go well for the opposition. This past season Woodall helped lead the Mounties to a 7-4 record (their most wins since 2017) as he once again was asked to not only be South’s leading rusher, but their leader on defense as well.

Woodall ended his junior season with 950 yards on the ground, added 172 yards receiving, and found the end zone a total of 14 times for the Mounties. Those offensive numbers alone are impressive, but when you add on his 106 total tackles on defense, Woodall is just a flat out machine who invites contact and isn’t afraid to lay the lumber on either end of the field.

The foundation for his success this past season goes all the way back to last summer when he and his teammates made a commitment to the weight room.

“Wyatt came into this season in really good shape and with the work he put into the weight room this summer you could tell that he was gong to be a force to be reckoned with,” Southmont coach Desson Hannum said. “There’s a lot that we ask him to do both on and off the field. His put a lot into his game both in the mental and physical side of it. He’s a great leader for us and had yet another great year.”

Coming off a six-win season in his sophomore year, and the returning talent that the Mounties had coming back this year, Woodall knew that if they wanted to compete in the always tough Sagamore Conference with teams like Lebanon, Western Boone, Tri-West, and Danville that it began in the summer.

“There was a drive really through everyone including myself this summer,” Woodall said. “We wanted this success as a team and you could feel that when we were all in the weight room. For me being in there was an awesome process because I love stuff like that. We all showed up three times a week at 7 am ready to put in the work and you could see that it translated out onto the field.”

For the second straight season Woodall has been tabbed as the best football player in Montgomery County and re-peats as the 2022 Journal Review Football Player of the Year.

To be the teams leading tackler and leading rusher takes a special player and Woodall fits the bill for the Mounties perfectly. It’s something that he takes pride in as the workhorse of the team as football has been a love his entire life.

“I have a lot of passion for the game,” he said. “Every aspect of the game I love. What I’ve accomplished so far in my career is just an accumulation of playing the game since I was little. The drive of simply wanting to be the best is about your want to and being competitive.”

Being from a small 2A school like the Mounties are, players like Woodall are a near must. Teams are in need of players to be two-way guys on both sides of the football and not only does Woodall do that, he thrives in that role.

“Wyatt is obviously that guy for us and he’s just an outstanding player,” Hannum said. “For him to be our leading rusher, then to immediately turn around and be the one calling defensive signals and our leading tackler, that’s not something you see every day. I think we were able to take a little pressure off of him on the offensive side this year, but when we needed a tough yard or two, he was going to the person who had the ball in his hands.”

This season Woodall saw his game expand offense he was more involved in a variety of ways. Whether that be catching the ball out of the backfield and using his athletic ability to make defenders miss, or being able to run out of different formations, Woodall showed his versatility in his junior year.

“He’s just continued to evolve as a player and him coming into the season in great shape helped that,” Hannum said. “We used him out of the shotgun more this year then what we were able to last year. Also he was able to help us in the passing game more. He has good hands and was able to make some things happen for us in that area as well. I think those are two areas where we’ll see him only continue to improve next year.”

On film for opposing teams and coaches, Woodall was always a focal point as they knew he would be one of the key guys that they would have to try and contain. It’s one thing to see it on film and a completely different thing to try and stop it during a game. Woodall didn’t take much credit for his success instead differing to his coaches.

“They put me and our team in positions to succeed throughout the week with how they set us up during practice,” Woodall said. “It was always a good game plan week to week to keep the opposing offense and defenses confused. Yes they’re going to try and game plan for me, but I think it goes back to the work that I put in the off-season. All of the speed training and weight training helped me have the season that I did.”

Woodall will be counted on even more next year in what will be his senior season. He’s within reach of multiple career records such as career attempts and career rushing yards. Those individual goals along with having even more team success are going to be at the forefront of his mind next year.

“We expect even more success from him just because of how talented he is as a player,” Hannum said. “This is a kid that’s going to be a four-year starter for us, has been our MVP and the Journal Review MVP the last two seasons. He’s accomplished a lot up to this point and going into his senior year he’s got a lot to look forward to. There’s a lot of big things that he can accomplish but he wants to have another good season as a team first and foremost.”

The stage is set for Woodall to continue to be the player the Southmont and the Mountie fans have known him to be one final time for his senior season. One thing is for certain, he won’t shy away from what is asked of him or shy away from contact as he’ll fight for every single yard and every single tackle .