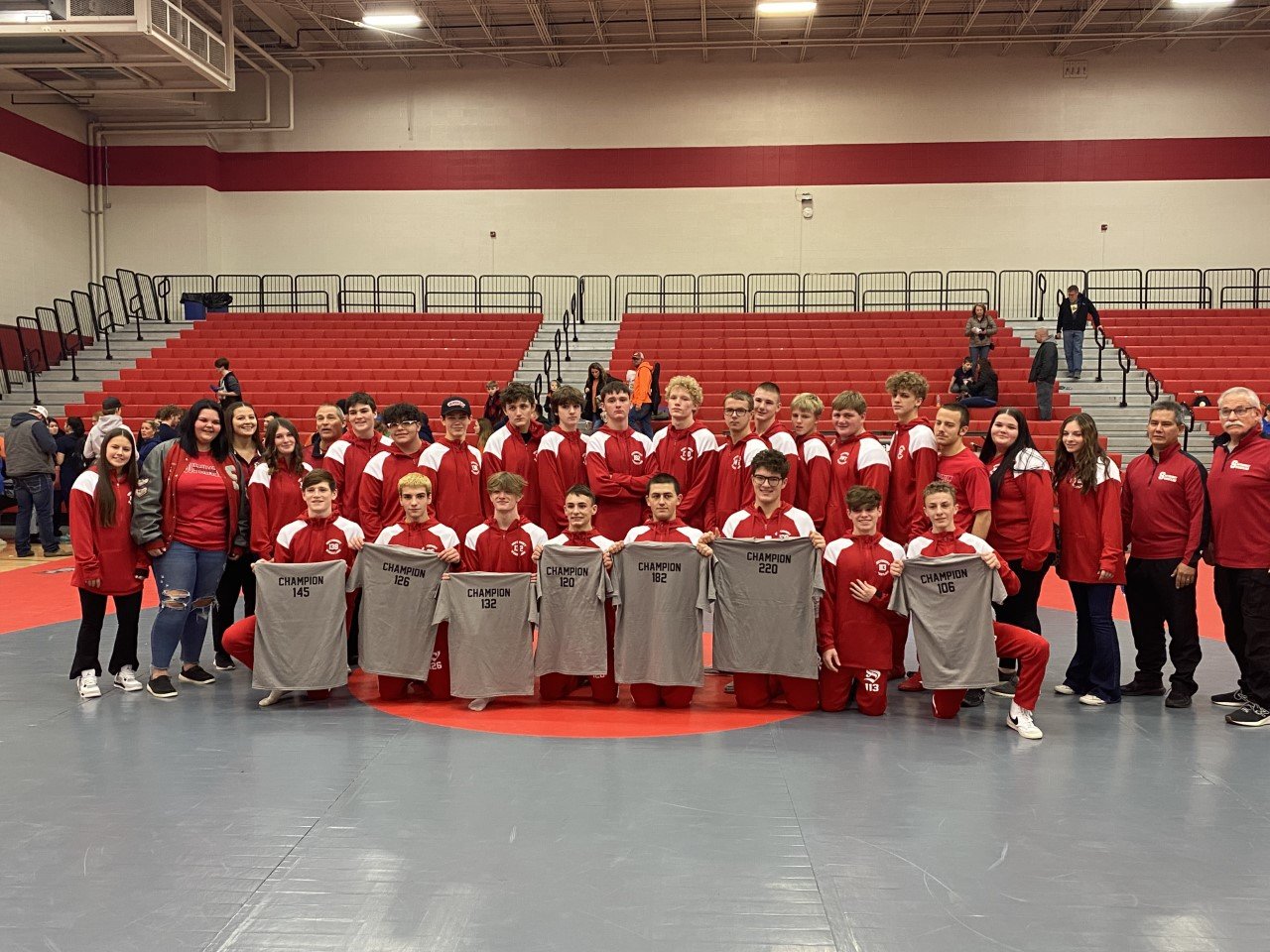 NEW MARKET — Southmont wrestling is still on top of the Montgomery County wrestling scene. Saturday South hosted the 2022-23 county meet and even without their top wrestler in 195 junior Wyatt Woodall, the Mounties were still able to defeat both Crawfordsville and North Montgomery as South captured its fourth straight county title. South defeated North Montgomery in their opening round 48-24 and followed that with a 51-17 win over Crawfordsville in the final matches of the day to secure the title.

“We had so many guys step up in many different ways today and I’m proud of that,” Southmont coach Jamie Welliever said. “In the last round against Crawfordsville we didn’t give up hardly any pins. When you’re in a dual meet format, you just can’t give up pins so that’s something we’re going to have to continue to do. Even the guys that lost in that final round didn’t get beat because they got pinned. With Wyatt not being here it gave the team an opportunity to find ways for other guys to step up and they did that and wrestled hard.”

“We have a lot of individuals who are on a great track right now,” Welliever said. “Every single one of them still needs to get better and they can’t be content with today. It’s going to take a lot to have a successful January and February. The level of competition in the county overall has stepped up from previous years and we had to go and earn this title today.”

The Mounties are off until after the new year as they be back on the mat beginning on Jan. 7 for what will be one of the most difficult, yet rewarding meets of the season when they travel to Franklin to compete in the annual Team State tournament.

North Montgomery took home second place as while the fell to the Mounties in round one, they bounced back with a victory over the Athenians in round two 49-28. The Chargers had three individuals be named county champions as Gage Galloway (160), Todd Laffoon (195), and Dylan Braun (285) went 2-0 on the day. First-year Charger coach Lincoln Kyle noted how it was a solid performance from his team in what was one of the first big meets of the season.

“I thought we wrestled alright for the most part,” he said. “There’s some matches that I’d love to have back because I think we left some out there, but I’m proud of our older guys for being named a county champion. It’s much deserved for them and they all work really hard. I’m going to continue to praise my seniors all year long because they’re our leaders out there. There’s a little more pressure I think with it being county but we tried to minimize that as much as we could throughout the week.”

The Chargers have a very busy next few weeks to round out 2022 as next Wednesday and Thursday they’ll compete in the Rensselaer Central Duals before hosting their annual Holiday Duals tournament at North Montgomery on Dec. 29 and 30.

Crawfordsville rounded out the county meet finishing in third place as they dropped both of their matches on the day. Cville did produce three county champions as well as Landon Vaught (138), Ashton Wilson (152), and Calvin Dittmar (170) took home individual titles. First-year coach Aaron Keller voiced his disappointment as coming into the meet on Saturday he believed his team was capable of competing with both the Chargers and Mounties.

“From my perspective we didn’t wrestle as good as I thought we would and that’s disappointing,” Keller said. “I thought we’d come out of the gates stronger than what we did. To still have three county champions is a positive to take away. We just have to get back to work on the mat and get better and I know our guys will do just that.”

Cville will be off until the after the new year as they’ll be back in action on Jan. 5 when they host Fountain Central.