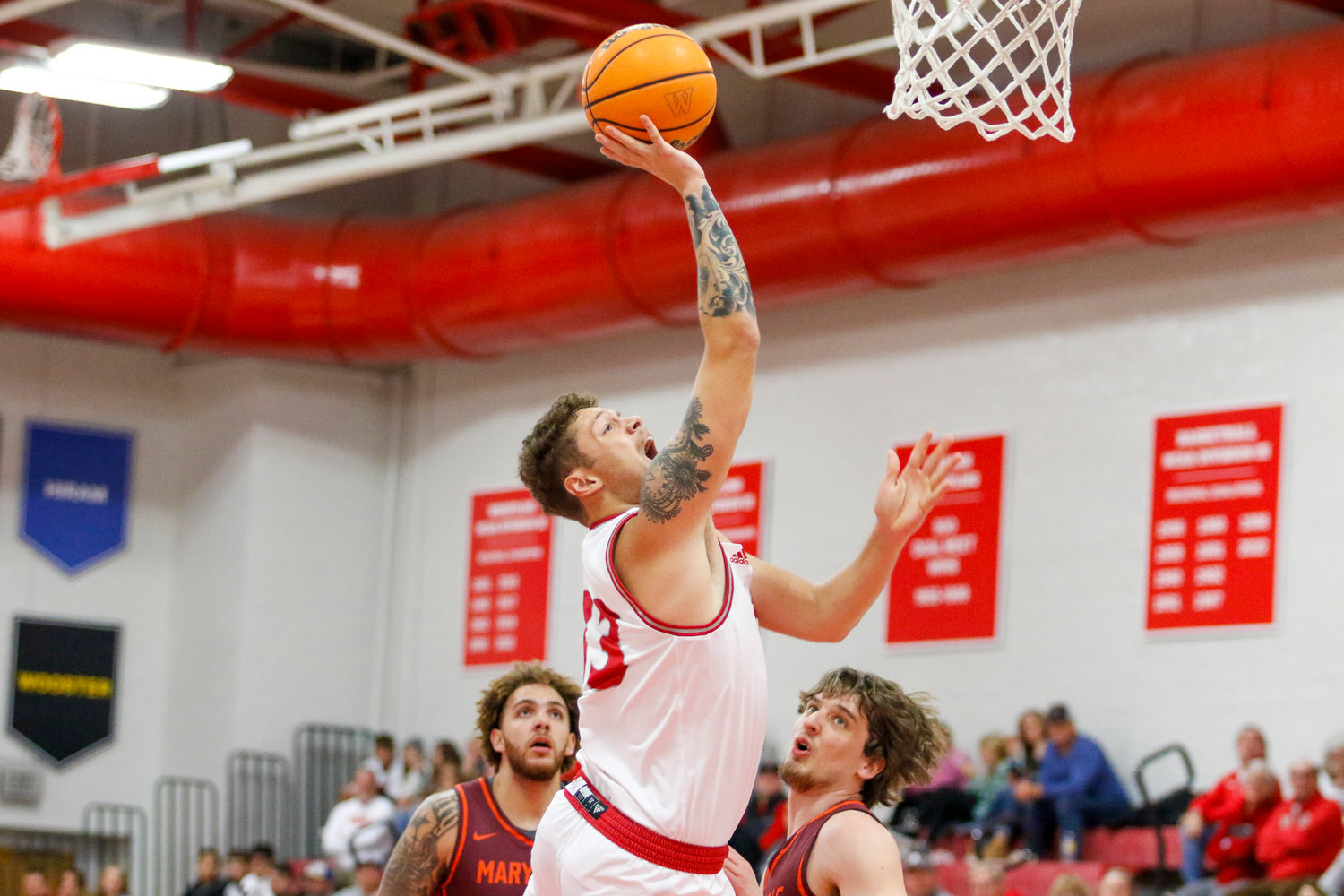 Ahmoni Jones is the heart and soul for Wabash Men’s basketball this season and is also their captain. In Saturday’s North Coast Athletic Conference showdown with Denison, the Little Giants climbed onto the shoulders of their captain as he led them to a 74-66 win over the Big Red. Jones was a monster all game long tying his career-high with 33 points and hauled in 12 rebounds as the Little Giants moved to 2-0 in NCAC play.

There was a sense early on that Jones might be in for a big day. At halftime following a last second steal and score by Edreece Redmond to give the Little Giants a 31-29 lead, Jones had 17 points and six boards already on 6-7 from the field. He continued his stellar game in the final 20 minutes and with 1:52 remaining and Wabash up 62-58, Jones stepped up and drilled a big-time corner three to extend their lead to seven. 11 of his 33 points came at the free-throw line where he was 11-12 for the game including multiple made charity stripe shots in the games final minutes.

“Coming into the game coach (Kyle Brumett) has been on me about being a more vocal leader for this group and be a more aggressive defensive rebounder," Jones said. "I tried to let those two things carry me through the game. The first five possessions I had three rebounds. From there I realized that I was feeling good today. I just let the offense come to me instead of rushing it and I have to credit my teammates for putting me in the right positions to succeed.”

Jones who had off-season knee surgery has had his playing time slowly increase in the early part of the season. He played nearly 31 minutes on Saturday and Brumett noted how his  captain is beginning to feel more like himself on the court.

“We needed everything that he gave us today,” Brumett said of Jones. “It’s been a few games since we’ve been able to get him that many shots (16). I was really proud of him for how he garnered so much attention from the other team and still only had a single turnover in the game. During his time here he’s gottten better at reading what the defense is doing. That three he made in front of our bench was huge. The biggest thing is still trying to keep him healthy as his physical conditioning gets better.”

Along with Jones’ game-high 33, Edreece Redmond was the only other Little Giant to score in double-figures with 12. Sam Comer scored nine and tied the team-high with Jones with 12 rebounds, seven of which were offensive. Champ McCorkle added eight, Avery Beaver seven, and Vinny Buccilla ended with five.

Wabash for the game shot 21-54 (39%) and 7-27 (26%) from three. While it wasn’t a great shooting game for the Little Giants, it was a great game from the free-throw line where they shot 25-30 (83%). Wabash also out-rebounded Denison 42-26 in the win and only turned the ball over nine times. The little things, which Brumett always preaches showed up in a big way were reasons why his team came out on top.

“Rebounding has been a big emphasis for us,” Brumett said. “We know that’s it’s going to be a year-long grind on the glass and today was by far our best rebounding game of the year. It begins and ends with Sam and Ahmoni doing what is expected of them. We’re not asking them to get 12 rebounds every single game but we want them closer to 10 than closer to five. Sam was just relentless on the o-boards today and Ahmoni finished a lot of possessions off with the defensive rebound. Our guards rebounded well in the second half too and allowed to build a small cushion.”

The Little Giants improve to 7-2 (2-0 NCAC) with the win over Denison as the Big Red fall to 4-5 (1-2 NCAC) on the year. Up next on the docket for Wabash will be a trip next Saturday to Ohio Wesleyan (5-3, 2-1 NCAC) in what is expected to be another close NCAC contest.