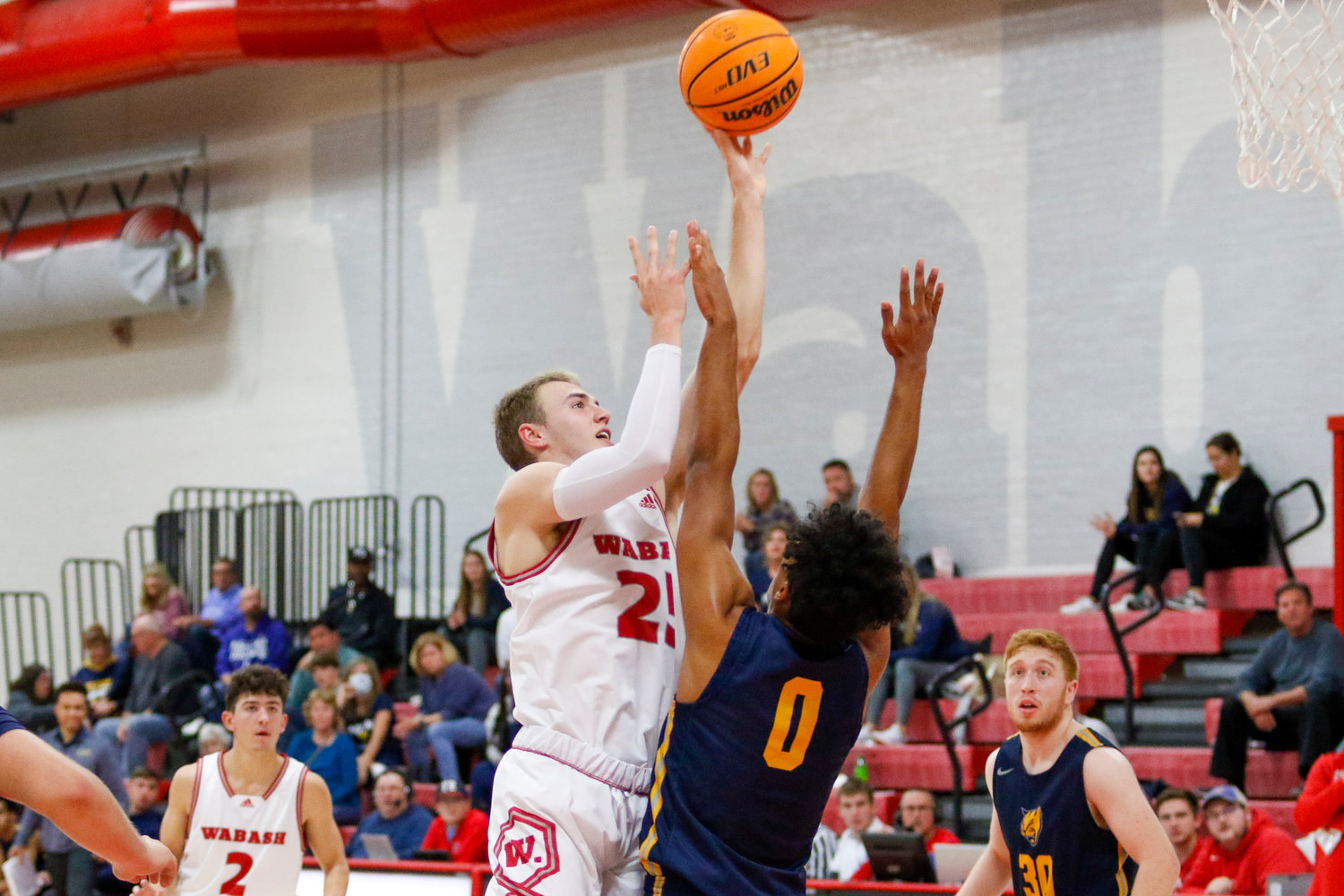 For 20 minutes on Tuesday evening Wabash College basketball was all smiles as they opened up their 2022 season at home taking on Mount Saint Joseph University. The Little Giants led at the half 52-35 looked as if they were on their way to a dominating victory. Along with going 22-30 (73%), Wabash had 15 assists on those 22 made shots as everything was clicking. Then came the final 20 minutes. With 2:32 left Dayne Gardner drilled a three to make the score 75-74 Wabash. Down 81-78 with the ball the Lions had a chance to tie by couldn’t convert as the Little Giants survived for the 81-78 win.

“This team is going to have to have these types of experiences,” Wabash coach Kyle Brumett said. “These guys don’t have the experiences that our previous groups had so they really didn’t quite know how to handle it. I will say Ahmoni (Jones) has dealt with some of these types of games and tonight we don’t win that game without his play in the final eight minutes. I would have rather had to teach our guys how to put a team away when you have a big lead like we did in the first half but that’s the nature of the beast sometimes.”

Eight different Little Giants scored in the season opening win as junior Edreece Redmond led Wabash with 19 points and six rebounds. Fellow junior Champ McCorkle who made his first career start ended the with 18 points while Sam Comer had 11, and Jones ended with 10.

“Champ played well tonight and he’s a perfect example of guys we’re going to need and who will be called on late in the game. That’s something they haven’t been asked to do. Guys him, Sam and Avery Beaver all almost played 30 minutes tonight. They’re going to have bank these experiences that they had tonight and be better from it.”

Luke Collingsworth led all scorers with 28 points for the Lions on 11-17 shooting.

“We gave up five threes and fouled them on another in that second half,” he said. “I feel like that we had a hard time with Collingsworth and Gardner around the basket. But those guys also combined to make three threes. Overall we’re not a very big team and I think our guys got a little nervous because we weren’t guarding the twos and because of that they didn’t really follow our plan and what happened was they were making both twos and threes. At the same time our offense went pretty stale. We only missed two twos in the first half and in that second half we took too many threes. Our threes need to come from the paint as we had success down there. Overall it was a perfect storm of bad decisions and stale offense.”

The Little Giants begin the season 1-0 and will return to action on Friday night when they welcome in the pre-season No. 16 ranked Washington University to Chadwick Court. It will be another early season test for Wabash but Brumett knows the experience of playing a tough team will only benefit in the long run.

“We’re playing Wash U for this reason,” he said. “We expect them to be good and to bring a veteran led group. We’ll definitely be able to see how they played in their first game because sometimes you just don’t know how these early season games will go. Tonight these guys were tough to guard and you overall it was a good win for our young team. I’m excited to be going into Friday coming off of a win. We should have tremendous crowd on Friday. Everyone needs to be at the game because they’re going to see two really good teams.”

Tip off for Friday is set for 7 pm back at Chadwick court as Wabash will look to go 2-0 on the young season.